I'd like to model the original, 1929 version of the Empire Builder. I plan to buy the locomotive, but build the cars from scratch, probably in O scale. After searching the GN archives and numerous other sources, I've not been able to find any specs on these heavyweight clerestory cars or consists for the train. I have learned that they were steel cars, not wood with steel sheeting. Each car bears the "Empire Builder" lettering above the windows.

Photos are also few and far between; I've found none good enough or close enough to guide a modeler. Plus they are all black and white (but I'm pretty sure the cars were painted Pullman green).

Anyone have any info on this rolling stock, or suggestions for sources for specs and/or photos?

Here is a distance view of the train: 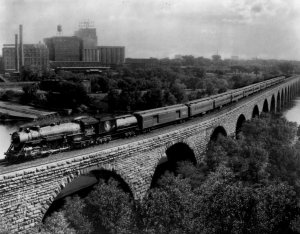 Thanks in advance for any help!

Oriental Limited did the train in HO brass some years back. A little research will get you all the information you need. The train was a little unusual. The coach was special. Pro & baggage are pretty standard. You should be Ble to find a consist on the web

Staff member
That will be nice if you can pull it off. Might have to use your Modelers License somewhat.
I will start looking in some of my books.

Staff member
Alan .. he is talking O scale unless you mean to use the HO for reference?

GaryM said:
Photos are also few and far between; I've found none good enough or close enough to guide a modeler. Plus they are all black and white (but I'm pretty sure the cars were painted Pullman green).

Anyone have any info on this rolling stock, or suggestions for sources for specs and/or photos?
Click to expand...

Don't know. I'm pretty certain most all the cars (probably not the observation) are going to be a Pullman catalog design. I will shuffle around in the materials I have and see if I can find anything. I have been curious about this myself.
E

Yes I meant for reference. You'd at least have pics and types.

GaryM said:
I'd like to model the original, 1929 version of the Empire Builder.

Anyone have any info on this rolling stock, or suggestions for sources for specs and/or photos?
Click to expand...

Book 1 American Passenger Trains and Locomotives Illustrated page 38 has a whole page of text on the train but very little good information. 1. It was an all Pullman all new car train. 2. The diner was a 36 seat. 3. As I suspected the observation car was a special car made exclusively for the Great Northern. The car is called the Solarium-Observation, it has three lounges (center, observation, and sun), a buffet, a barber, men's and women's rooms with showers. There were seven of them ordered. The book has a two page spread for this car with exterior and floor plan. After seeing it, I believe I have a model of this car somewhere.

Book 2 The Official Pullman-Standard Library Volume 3 is only for light weight equipment so it is no help at all.

Book 3. The Great Northern Railway page 327-330. Contradicts book 1 somewhat. It states that the coaches were originally built by Barney & Smith in 1914 and modernized for the 1929 Builder. This confirms what Espefan said about the coaches. It adds that the diners had Tudor decor, were air conditioned, and has some technical specs (83' 10" over the buffers and weighed in at 83 1/4 tons, roller bearing equipped). I don't see any air conditioning in the photo you have posted. It says the standard consist was 10 cars, but then gives the list below on the next page.

Eastbound is the same except there is no sleeper from Seattle to Spokane but another 8-2-1 from Spokane to Chicago.

The coaches were replaced in 1937 with 58 seat Pullman Standard coaches.
Last edited by a moderator: Sep 7, 2016

And more. book #4 Lines West by Wood (same author as book #3) has some different information. It states "All regularly assigned Pullmans on the Empire Builder had open sections ranging from the first class 6 section-6 bedroom cars to the 16 section tourist sleepers. This implies all the standard Pullman type sleepers could have been assigned to the builder. The question is were they actually painted for Empire Builder on the outside?

It also has a picture (page 100) of a 9 car EB westbound builder out of Browning Montana. In that undated picture I can clearly see air conditioning on four of the cars. Also shows clearly that the two sleepers in front of the solarium-observation are the same 8-2-1 type.

Challenger Imports did a run of them in HO scale in 2001. Looks like they include a 16 section sleeper, and a 6 section 6 double bedroom sleeper like the Lines West book indicated.
http://www.brasstrains.com/BrassGui...Train-EMPIRE-BUILDER-Great-Northern-8-CAR-SET
http://www.brasstrains.com/BrassGui...in-EMPIRE-BUILDER-Great-Northern-3-CAR-ADD-ON