autocoach said:
Wouldn't those be British OO "scale" or 1/76 4mm to the foot models. If you want more 1/72 start looking at the military modeling sites where this is a common scale.
Click to expand...

Actually there is a limited variety of usable figures in 1/72 military, other than the ground crews. Prieser has had 1/72 sets with civilians but they are out of production and scarce.

OO scale figures work because the figures are about one millimeter short, which can be compensated by making new "shoes" and blending the old shoes into the pant legs. I wanted the seated figures in the set which wouldn't matter if the figure was "short".

Was the cab floor already wide enough, or did you have to enlarge it?

All the cab requires is removal of the original lugs.

If you are really interested in a good source for 19th century and Edwardian figures try https://www.acstadden.co.uk/shop-3. He casts in pewter. They are exquisite.

If you really want to go all the way there is https://www.modelu3d.co.uk/ who will scan you in whichever costume you bring and produce 3d Printed replicas of yourself in any scale. He uses his own software to make the scan 3d printable. He has his own printers so not available through Shapeways Excellent work. I have some I have recently painted. Of course it will cost you a trip to the UK to be scanned. I have been looking for a US equivalent. 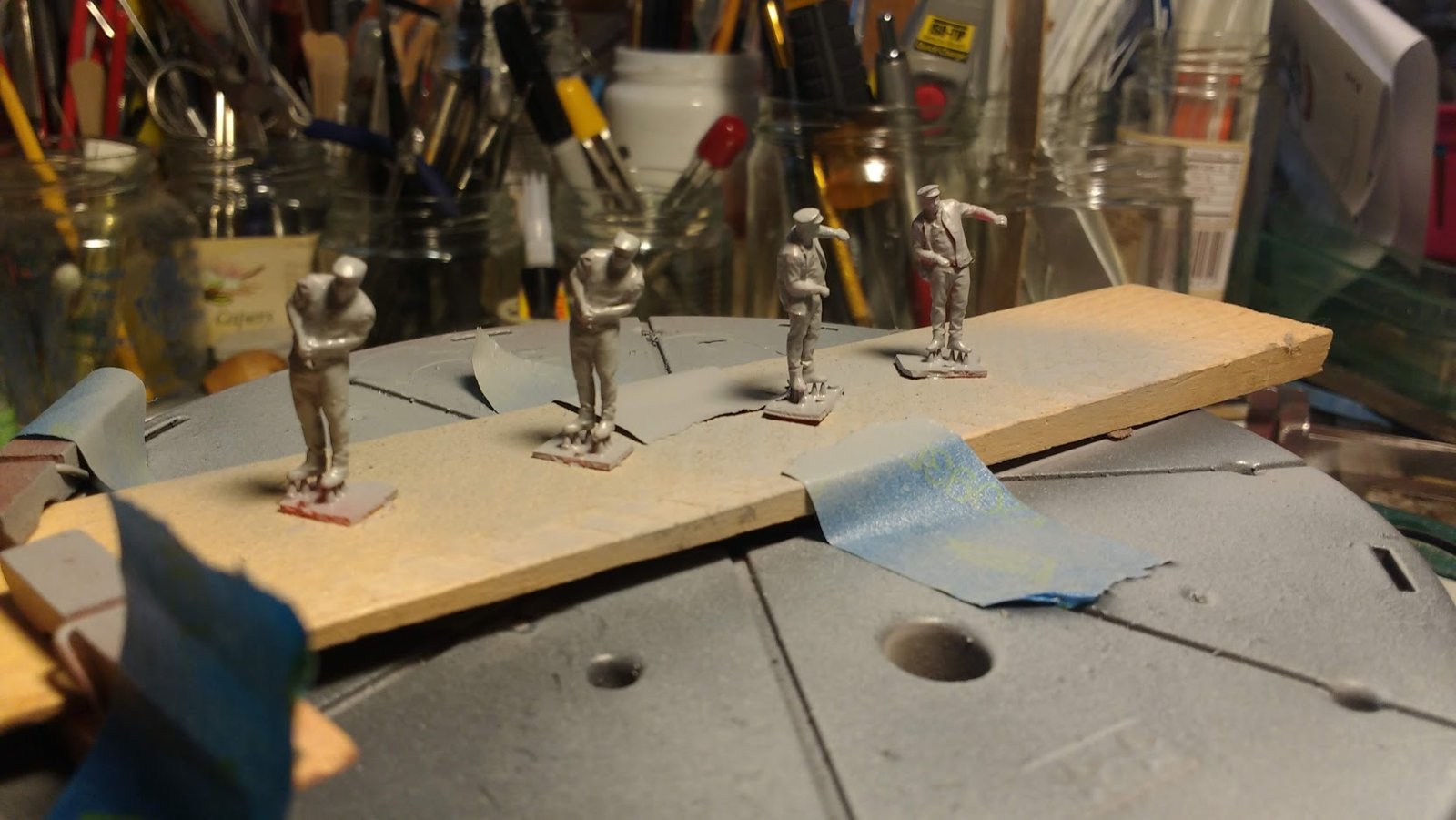 Thanks for the input.

Have some 1/64 Modelu figures from another project and they are really fine.

There are drivers and axles available from places like Scalelink in the UK to reshoe our iron horses.

These are 12mm which will give us Scale172 36" drivers. Scalelink has 3mm self quartering axles for the newer Roundhouse/Athearn locomotives along with 1/8" for the older original models. Self quartering makes locomotive building easy.

The internet is great.

Correct drivers and a bigger cabs are needed to remove the HO look. This is a cab I built from styrene to convert the Roundhouse HOn3 2-8-0 to Sn2. Learning a 3d CAD modeling program and have the cab printed out probably would take less time.

What about standard gauge?

Sn3 cars scale out well as 34' standard gauge cars. On3 or On30 trucks can be widened to Scale172 gauge of .784. OO scale 12mm diameter wheels are close enough. The Bachmann On30 Mogul could be massaged to represent a standard gauge loco.

I see your photos, Harold, and I wonder: Just how many different scales do you have samples of?

JazzDad said:
I see your photos, Harold, and I wonder: Just how many different scales do you have samples of?
Click to expand...

Have a sample of most everything from Z to large scale, can never have too many trains.

Am a rubber gauger.

hminky said:
... can never have too many trains.
Click to expand...

I think Cornelius Vanderbilt said that.

We can build a credible C-19 from the Roundhouse 2-8-0 with minimal bashing. The stock cab can be adjusted to make a taller one. The opening can be fitted with a new filler piece and all that is required is an 1/8 high skirt around the bottom. A new side panel would be added for decoration. Our crude mockup with a cab from another project.

S-scale C-16 domes are the right size to make our Scale172 C-19. Those domes are Tomalco but domes are available from Slim Gauge 3D at Shapeways. The motor mount just has to be adjusted and the cylinders have to be modified to lower the boiler.

Our cab doesn't go below the walkway because the walkways are at the base of the boiler where the examples are higher on the boiler.

I think that the MDC Roundhouse "Old Time" Consolidations and Moguls are what started Doug Tagsold down the line of 1/72nd Scale Narrow Gauge modeling. The Malcom Furlow book: "Ho Narrow Gauge RR You can build", also used Roundhouse's Narrow Gauged version of at least the Consolidation. This was exactly the same locomotive as the standard gauged version with a narrowed down undercarriage. It kind of appears to me that Roundhouse modeled these loco with the intentions that they could be used as both Standard and Narrow Gauge!

The Tyco/Mantua Ten-Wheeler boiler can be fit to the Roundhouse old time mechanism.

Doug Tagsold used the MDC/Athearn/Roundhouse HO 2-8-0 for his Scale172 locos. The loco mechanism matches the first generation narrow gauge consolidations. 14mm Scale Link drivers give us the correct 40" driver size. A boiler from the Tyco/Mantua Ten-Wheeler gives us a boiler.

Locomotives were proportional the same setup can be used for a HO early era consolidation.

Have the mechanism running smoothly.

Here is the loco in large scale:

autocoach said:
Wouldn't those be British OO "scale" or 1/76 4mm to the foot models. If you want more 1/72 start looking at the military modeling sites where this is a common scale.
Click to expand...

The Military 1/72 scale is exactly the reason that Doug Tagsold came up with his layout in 1/72nd scale.

NP2626 said:
The Military 1/72 scale is exactly the reason that Doug Tagsold came up with his layout in 1/72nd scale.
Click to expand...

Having done this for a short period, military modeling adds very few items.

There are only a couple of Ford style 30's Russian trucks available from the military world.

Almost all the figures in 1/72 military are rubbery plastic that is impervious to gluing.

The stuff I have found comes from the OO scale world. There are lots of suitable items that work.

One of the few 1/72 suppliers Reverisco( tin-soldier) offers some really nice early vehicles in 1/72.

Was asked why not HO?

We now have our Scale172 trains running. Simple mods to HO equipment gives us narrow gauge in a larger scale in the 1870s. This was my reason for doing this. All the other scales can't give me easy 1870s narrow gauge.

The far right wheel on the ore car is a HO scale 33" and demonstrates the difference. A really D-oh! moment, wondered why I had an extra wheel set.

The ore car give us an early coal car. The smaller wheels look good.

In our HOn30 adventure we found that the track can be painted at the bench and blended in with "fur grass" or Sculptamold/latex paint mixture.