Where is Your Model Railroad Layout Setup?

There seems to be many different places in modelers' home where model railroad layout have been setup. From bedroom size layouts (under the bed N scale) to large layouts in small out-buildings, there' a variety of layout sizes and scales where the modelers constructed their layouts.

My modest sized HO scale layout is in our homes basement. It's located in a room approximately 16 X 12 feet in a room that has a finished ceiling, dry-walled on three and a third sides, carpeted floor and climate controlled. The layout room would have been larger had not been that the Packer football/bar room was built long before the layout room and limited the size of the current layout room. A through the wall extension of the layout is planned for the near future. 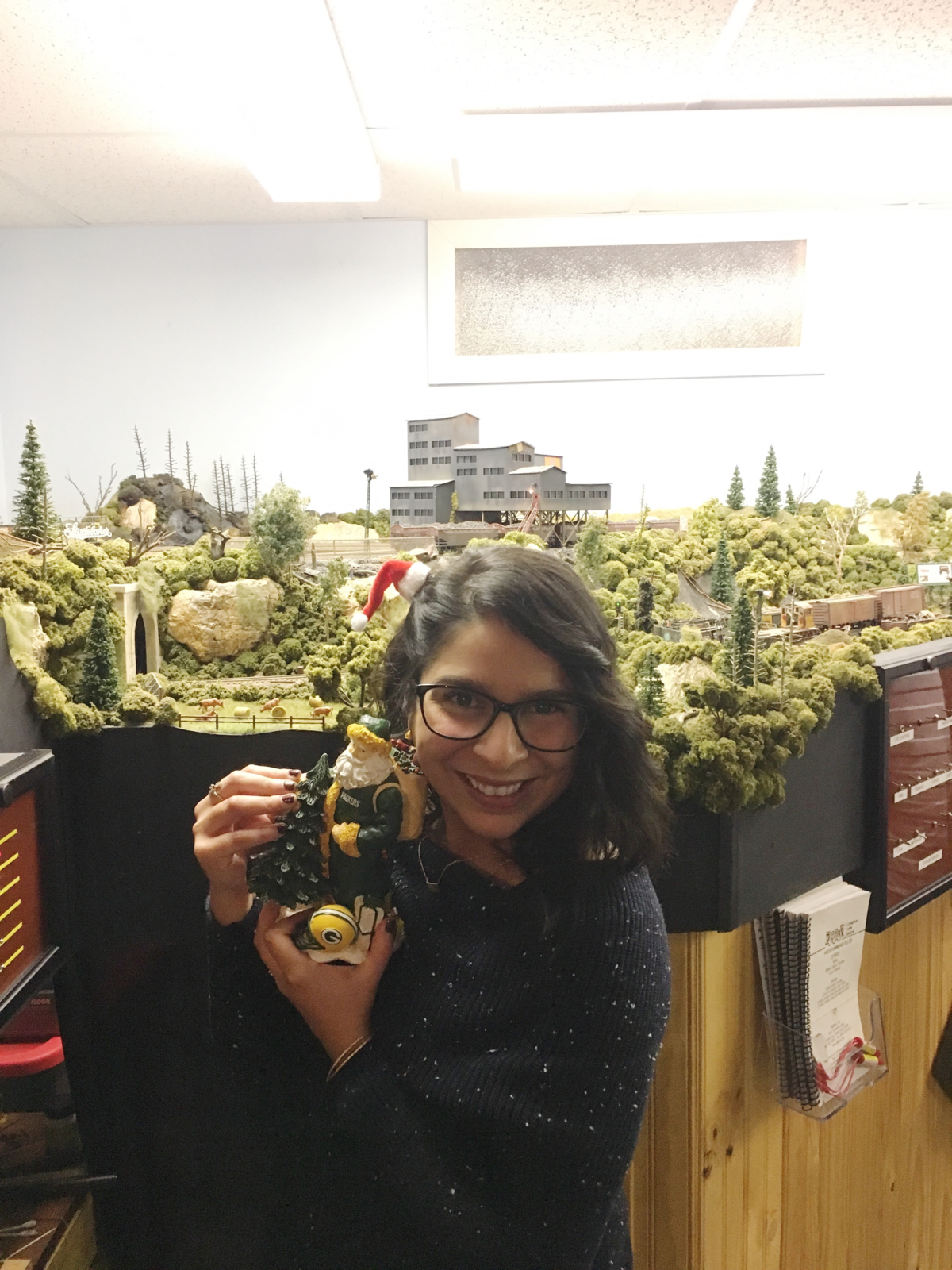 The only non-area photo of the layout taken at Christmas several years ago. Holding the Packer decor is my nephew's new wife, a food blogger who wrote for the Chicago Tribune and magazines. The mine has since been replaced by a another New River Mine. I wish I covered over the exterior window with drywall when I enclosed the room.-Greg 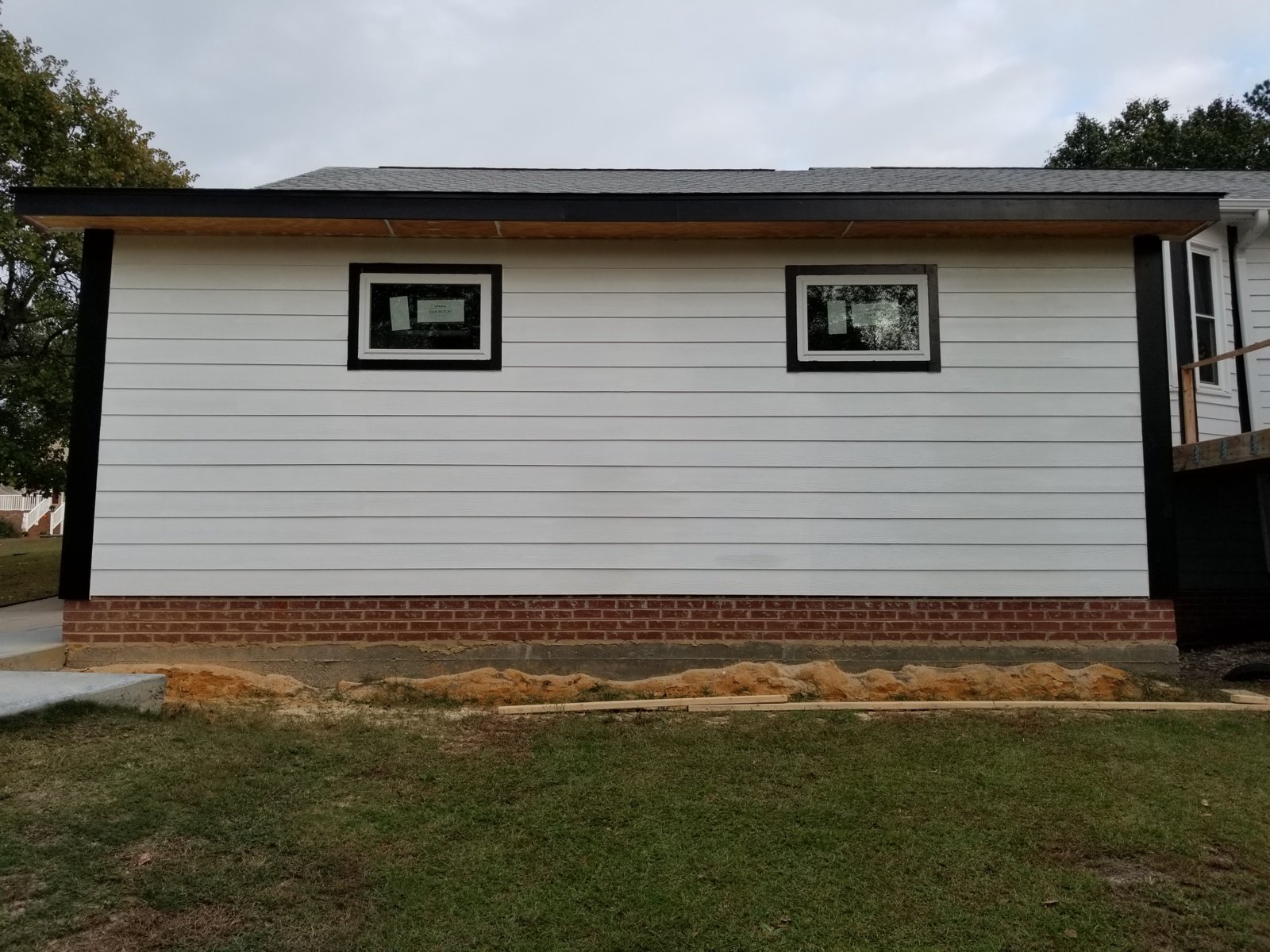 yet, but the room will be 25' X 12' in a dedicated garage built just for trains. Heated/AC, windows for light only 6' off of the ground. Will be the start for my HO empire.

Well your nephew did well to marry a Packer's fan!

Oh ya.... your layout looks great too! I will have to find or make a book holder like that for the Digitrax manuals like you have there, that is a keen idea!

For my layout... it is in Bedroom #3 and deemed as a temporary train room until the garage extension 20x60 is built this spring/summer.

James...I purchased that Digitrax manual holders from Office Max and they called it a brochure holder. I just got tried of looking for a manual every time I needed it for reference. Various deoder manuals are located behind the Digitrax manuals.

mine is in a 26'x22' building you can see my layout on virtual layout tour forum.
T

When we moved into our house 31 years ago, I anticipated moving my layout (built in sections) to the finished basement. But for about 20 years, I never got a chance to finish setting up the layout in the basement! Subsequently, I inherited my parents' library and a bunch of furniture, which wound up where the layout was supposed to be. A few years earlier, anticipating this eventuality, my wife suggested we add on to our main floor area which turned out to be a 14' x 28' addition. The only condition was that she would get half as a combination study/guest bedroom. That left me with a 14 x 14 dedicated train room (less the thickness of the walls). The result is a folded dogbone with a peninsula with a couple of spurs. Two walls have display shelves, but I could not put in a second level due to code restrictions requiring physical access to two windows for escape in case of fire! There are two levels on the layout, the lower at 32" above floor level rising to 36" on the other side of the room, with a 2.5 percent grade from one level to the other. I have two yards, one on each side of the room. The reason for the low levels is so I can operate seated, and also so if we have any small children come in. (My grandchildren are grown and not interested anymore...not to mention the current isolation situation.) I am not much for "prototypical operation", but would rather just run trains, especially passenger trains from the 1950's, and unit freights, the latter mostly pulled by steam. If I can ever figure out how to post photos, I'll try to do so.

The full basement. When I was looking for a home to downsize into in 2011, I was writing a contract on a very old house that would have required quite a bit of work. The realter asked if I had seen this house, and he pushed his laptop across the desk to me. It was a rambler with two car garage and full 2,000 square foot unfinished basement. New house, been on the market for 6 months in a fairly new neighborhood. I was interested, so I held onto the contract I was putting together and we rode over to this house. 3 acres of land, 1/3 wooded, front entry garage, some stone wall exterior, three bedroom with 15 foot ceiling great room. We went around the back of the house first which sloped down to the basement floor level. I could see in the windows all the utilities were in the center area with 2,000 square feet of empty/unfinished. 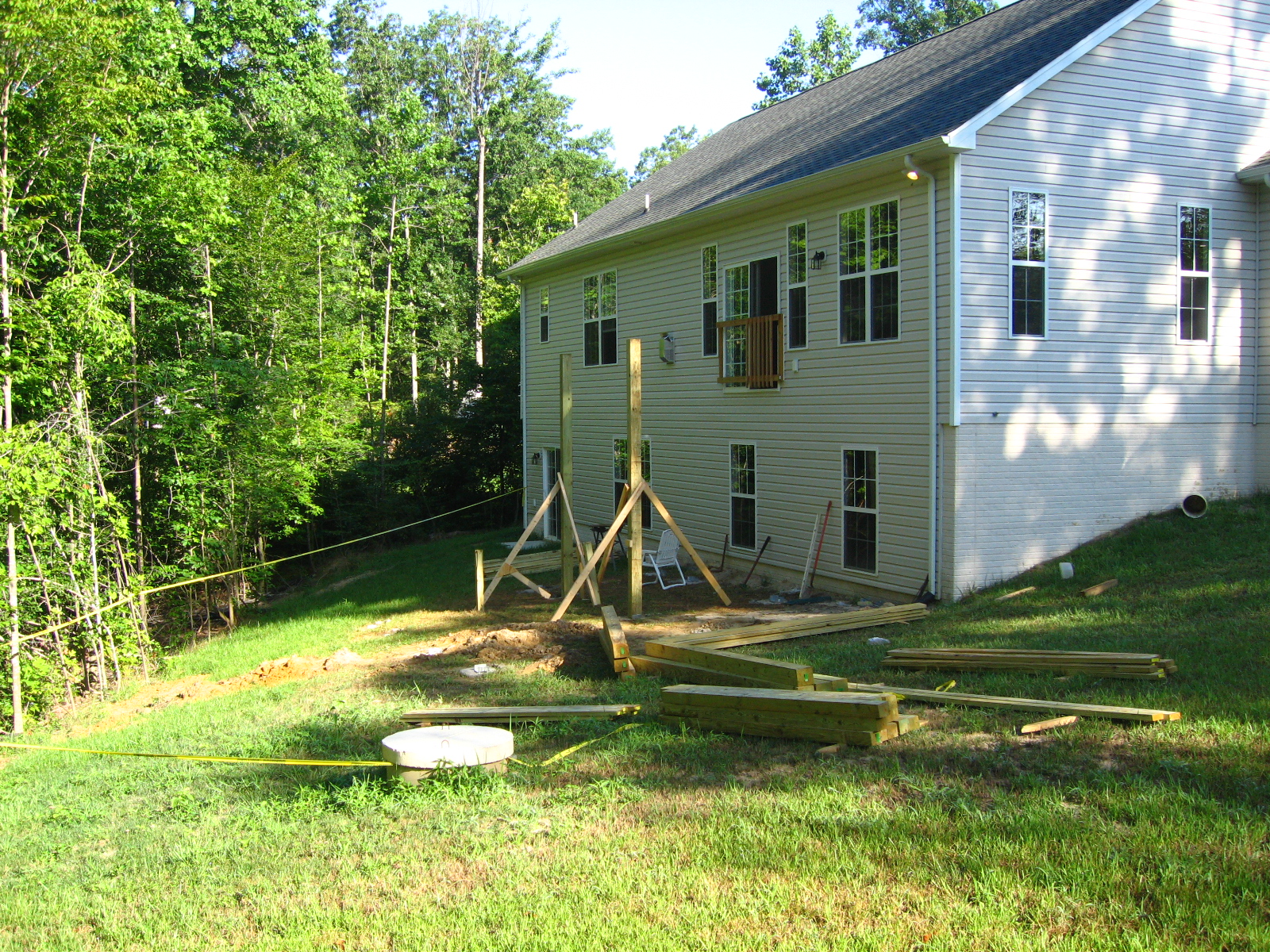 trailrider said:
If I can ever figure out how to post photos, I'll try to do so.
Click to expand...

Type your reply in the reply box. When you come to the spot in your reply where you wish to add a photo, click the "attach files" button underneath the reply box. This will open a box where search the folders on your computer and find the file you wish to post. When you find it, click the photo and it will automatically upload to the site. Decide if you want it to appear as a thumbnail or as a full size image, and click the appropriate button.
Thumbnail: 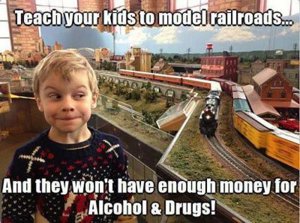 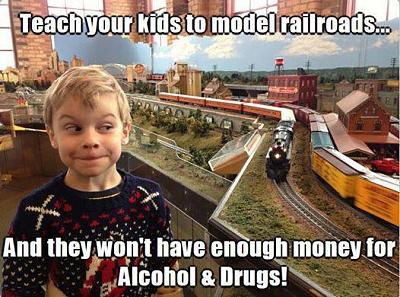 And that's how ya does it!
My layout used to be in a room about 10' x 10', but then the wife told me I could take over the main room in the basement. I didn't hesitate! The former train room is now a workshop, and the layout got torn down and is in the process of being expanded. I was able to reuse much of the lumber from the old layout to build the benchwork for the new one, which will be 19' x 7'.

The track plan is subject to change, but this how it will basically be. I do have LED shop lights installed above the back of the layout 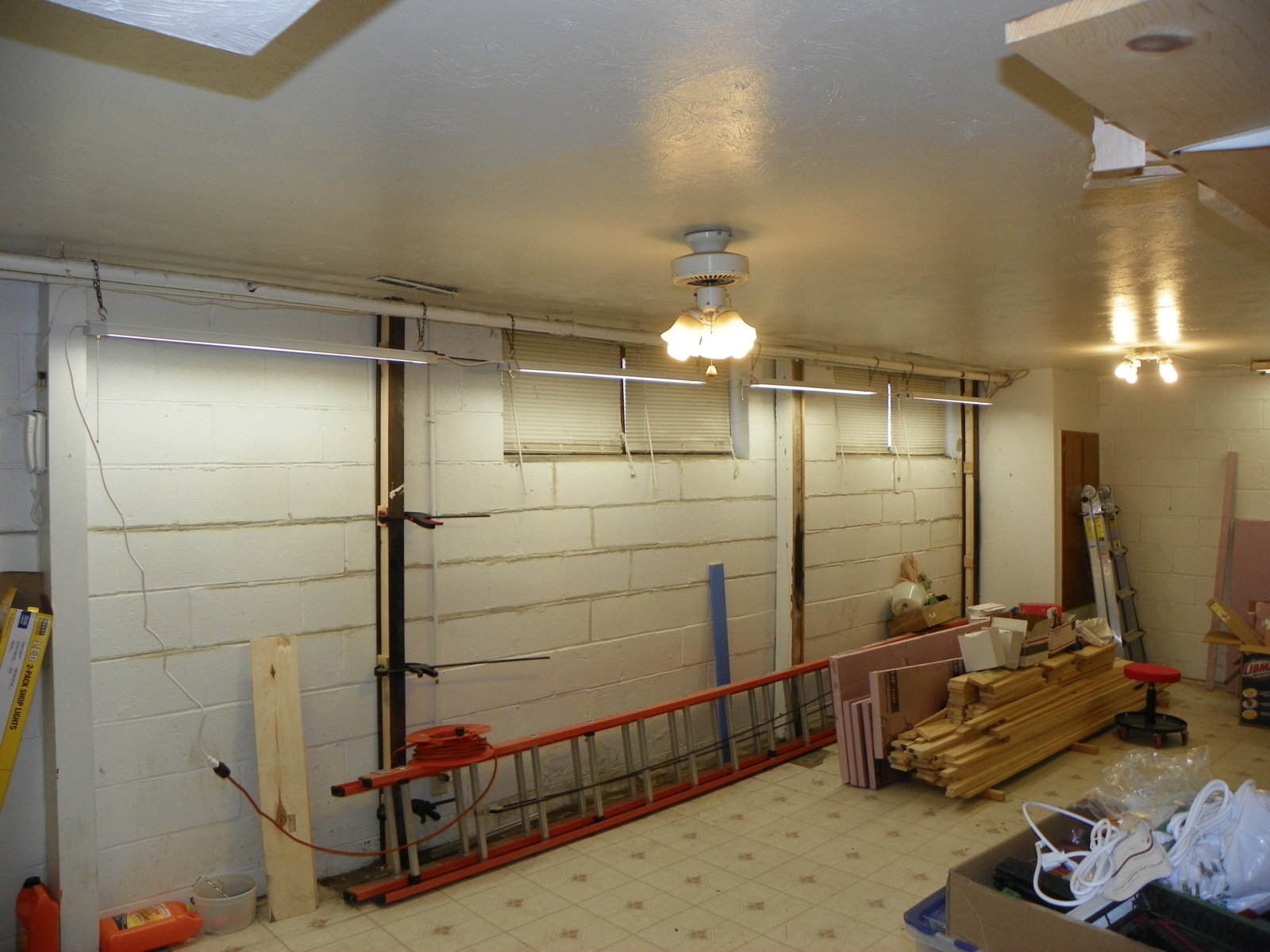 and have 4 that will be installed above the front of the layout. I need to get the electrical raceway, switch, and 2 outlets installed for them. Unfortunately, the LED lights for the front are not linkable, so 2 lights will be plugged into each of two outlets. The outlets will be controlled by a wall switch.
I'm still working on the lift-up section for the benchwork.

Mine is in my unfinished basement. 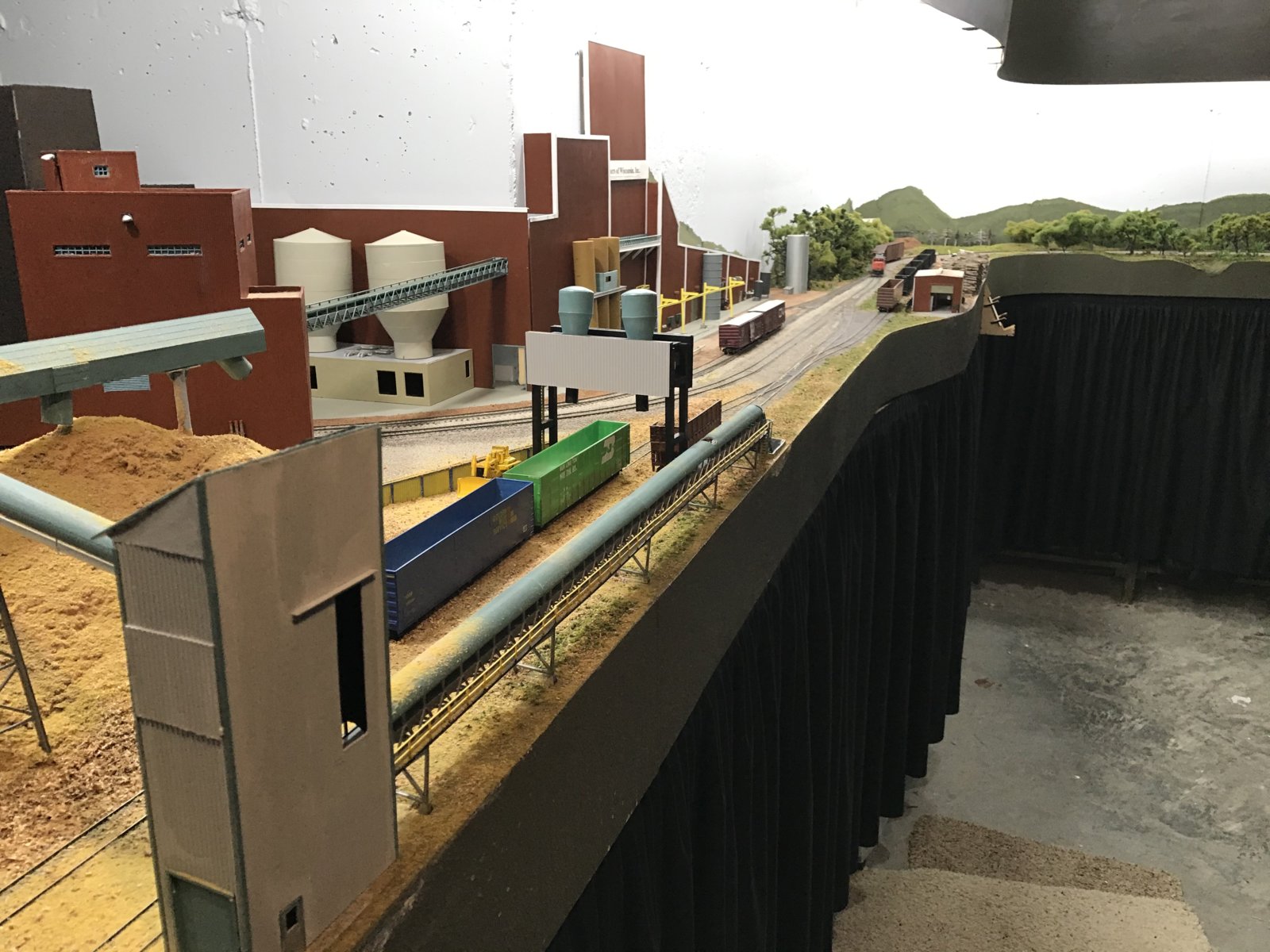 I built a dedicated 20' x 32' building out in the yard. I model HO and I have two levels that aren't currently connected by a helix; it may not happen anytime soon. Here it is under construction in late 2009. The area to the far left is a separate storage room. It is climate-controlled. 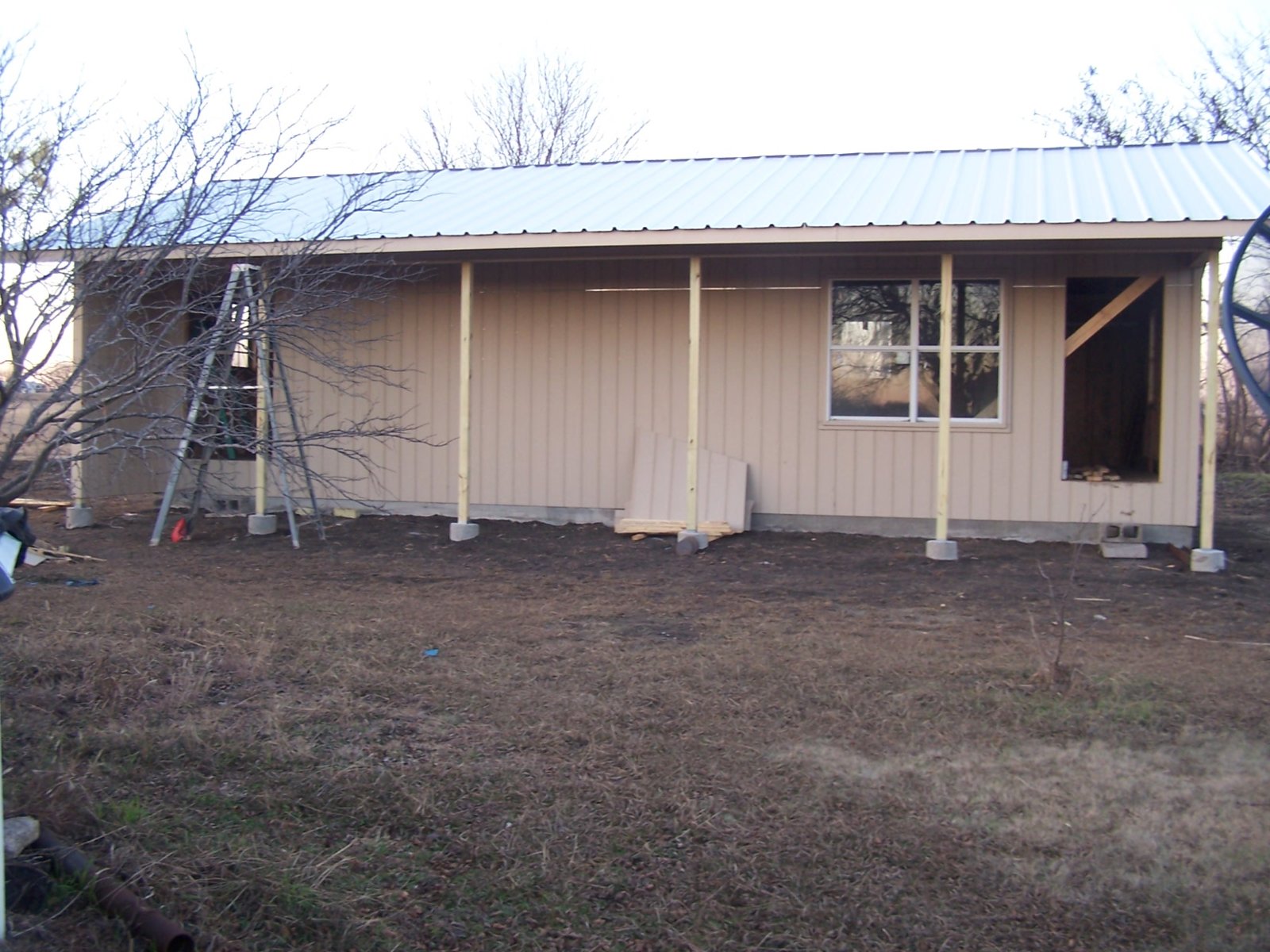 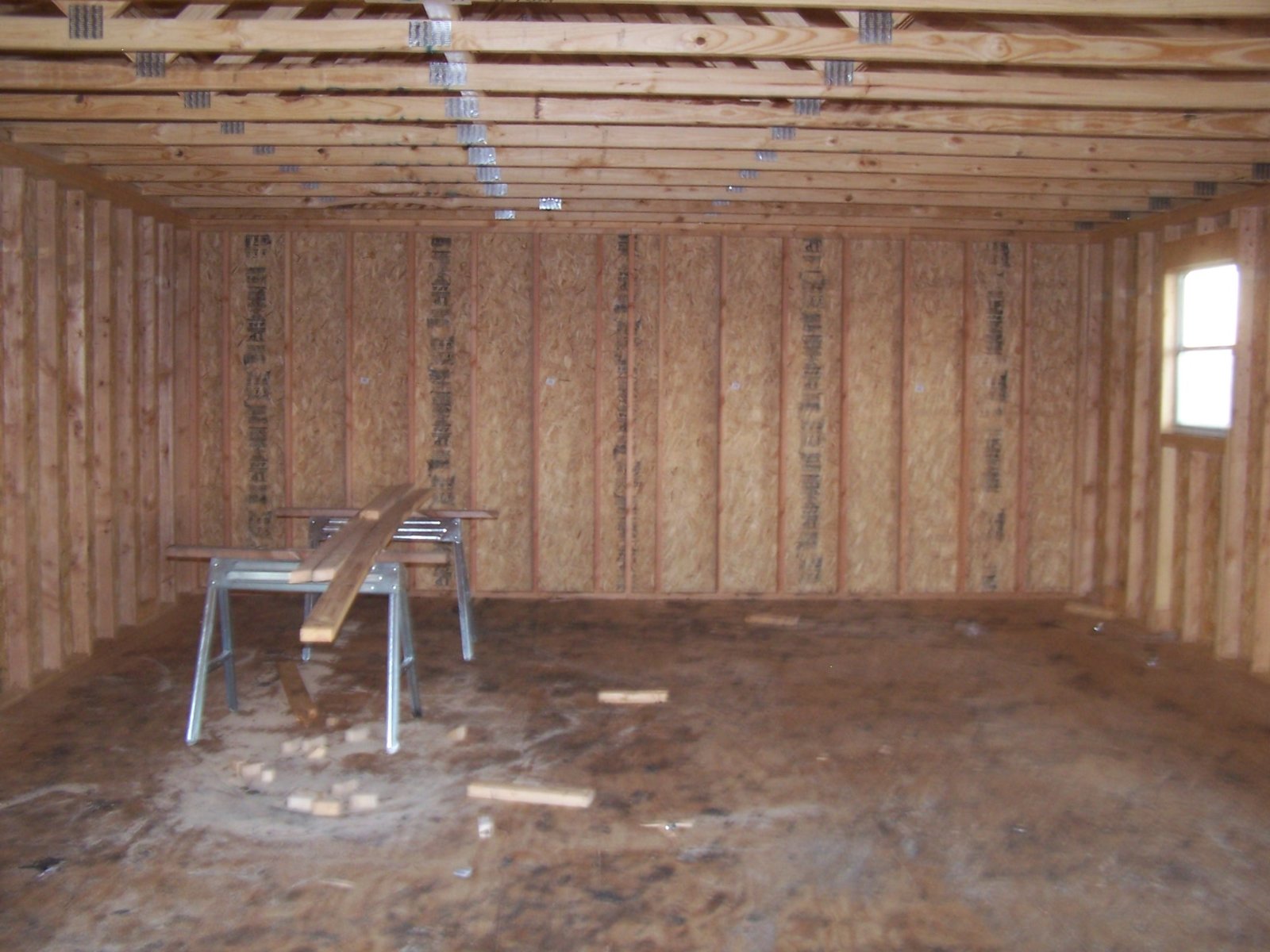 It is now fully insulated with 1/4" plywood walls and ceiling. It's hard to describe the layout shape, but it is around the walls with a large U-shaped peninsula with a 62" turnback loop. All mains travel through the scene only once.
Each level has about 165' of main line with over 800' of passing sidings, industrial spurs and three staging yards.The main staging yard has 12-16' single ended tracks, the other two have five each, one of which is double-ended. All eleven passing sidings as well as all of the staging tracks can hold my normal 22-24 car trains. I like switching the most and have 70+ industries, many still just structures plopped down on bare plywood. I think that I have about 115 switches, mostly operated by ground throws.
Can't really get an overall shot of the entire layout due to available camera angles. While all of the benchwork and most all of the trackwork is completed, I am only about 35% completed with the scenery. It's going faster now that I am retired.
I have been posting progress in the Coffee Shop along with various ramblings.

Mine is in the finished basement. When we bought the house, there was a bar area in the big room, but only the upper cabinets remained on the wall. My space takes up an area approximately 10' x 9' (with the new filled in area). I have a "u" shaped table around the outside, with a 4' x 8' space in the middle. I then have a couple of lift bridges across the open end for when I run trains as I don't duck under any more.
R

My wife and I moved into our current home (fixer upper) in late 2017 and spent the first year working on kitchen and master bath remodeling. Starting in Dec 2018 we pulled a permit to finish our unfinished basement. 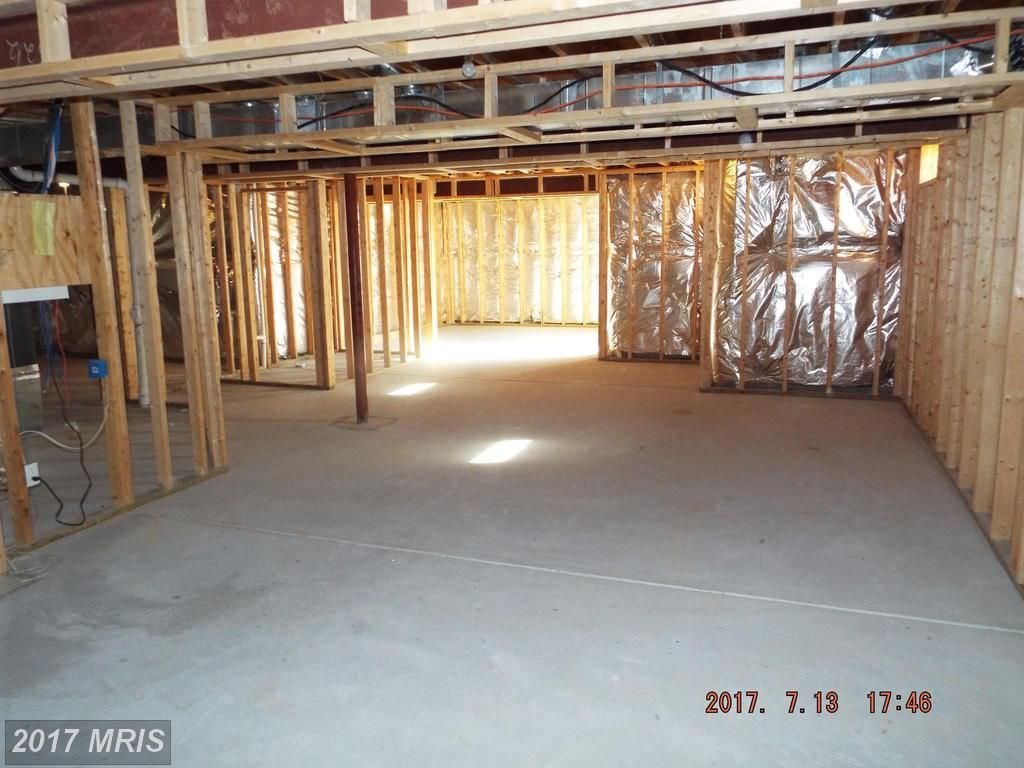 Other than plumbing and wiring, my wife and I DIY'd the finishing including a full bathroom which my wife did all the shower and floor tiling.. It took about a year. 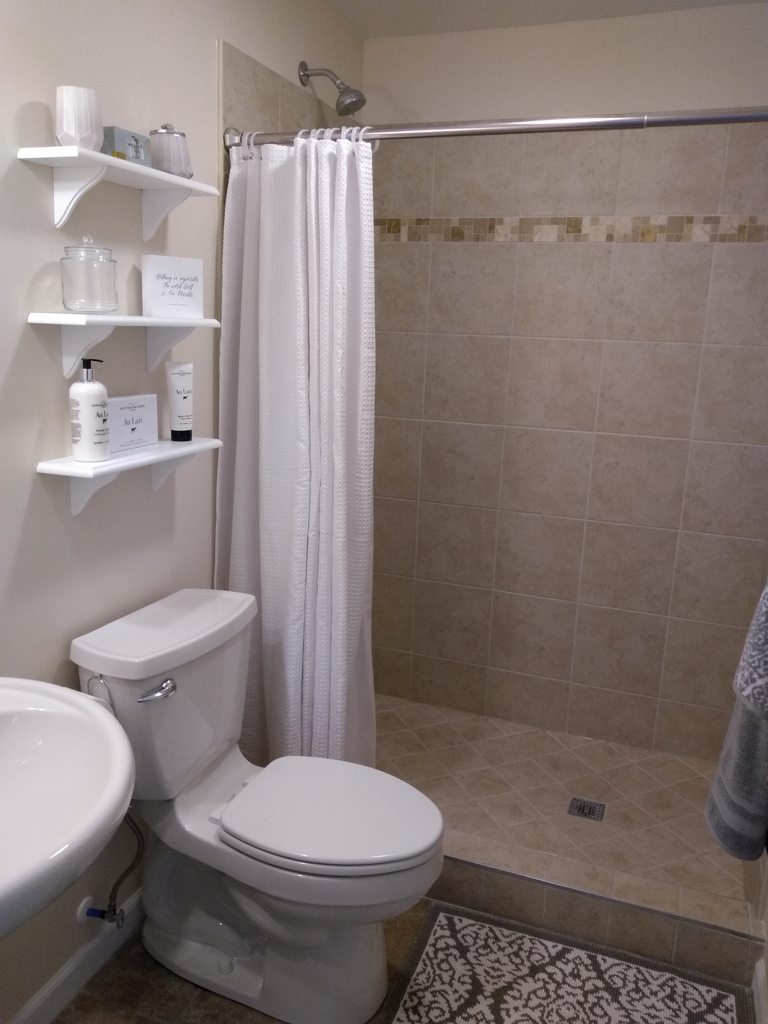 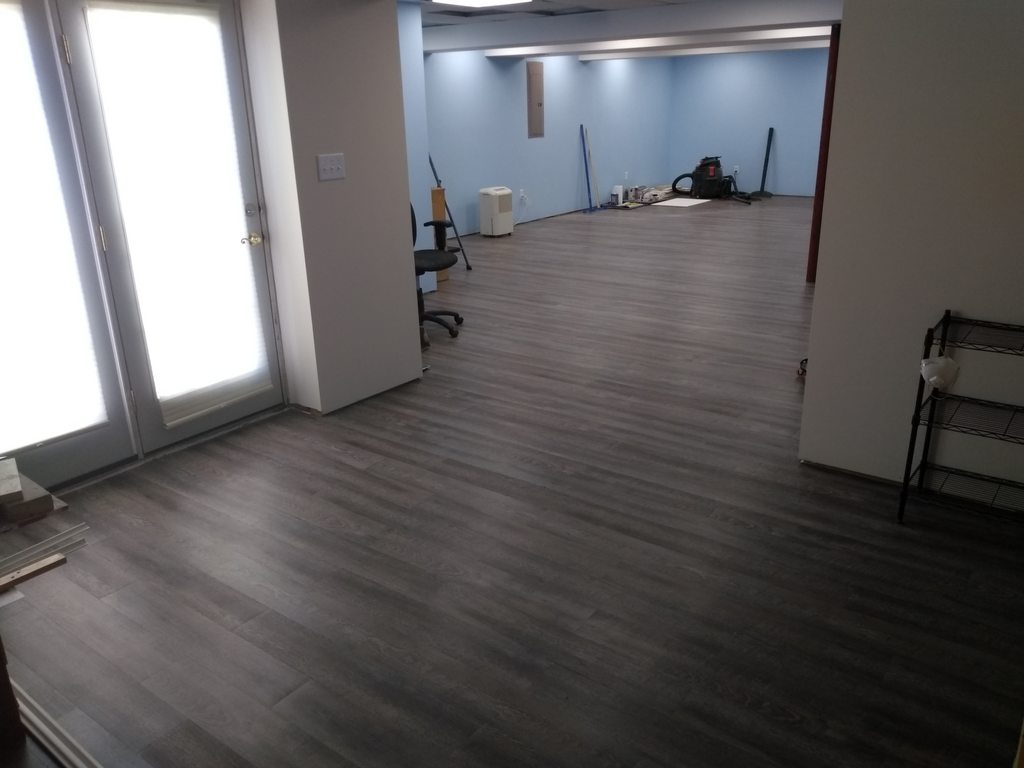 Starting last December I started building bench-work in the main part of the finished basement, which is about 33 feet long and about 15 to 18 feet wide. 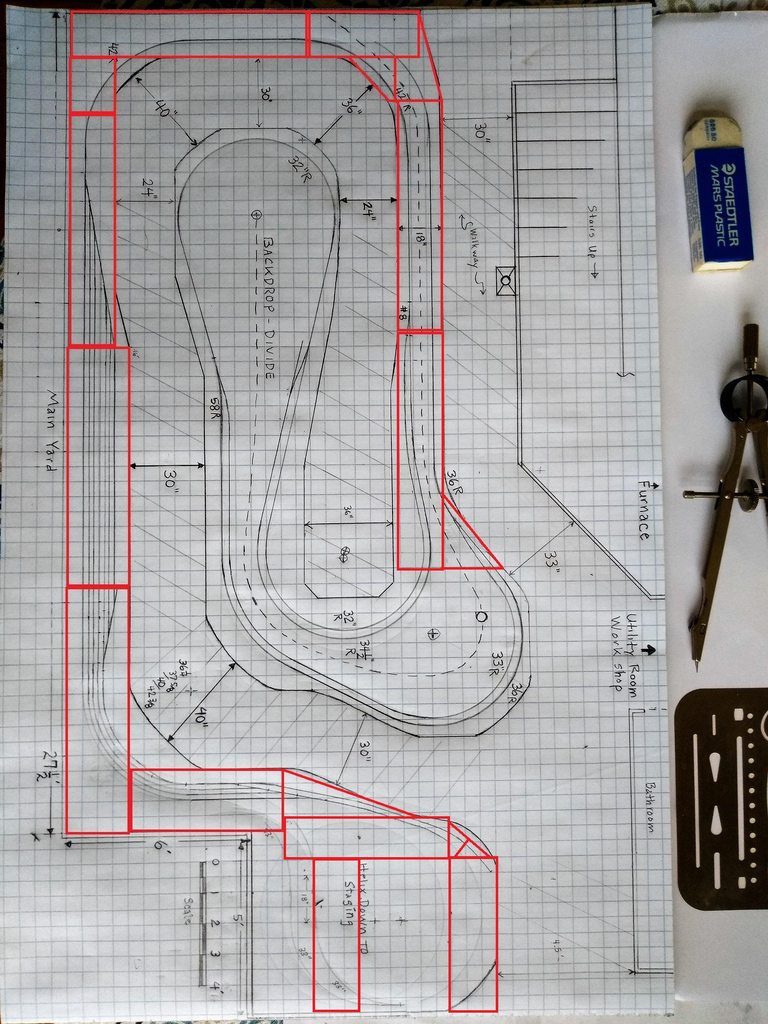 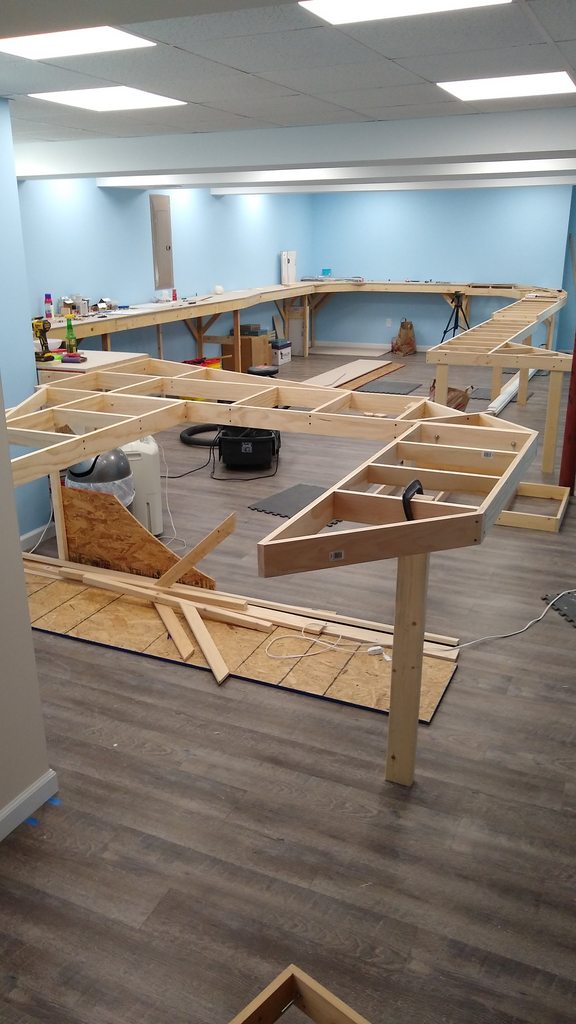 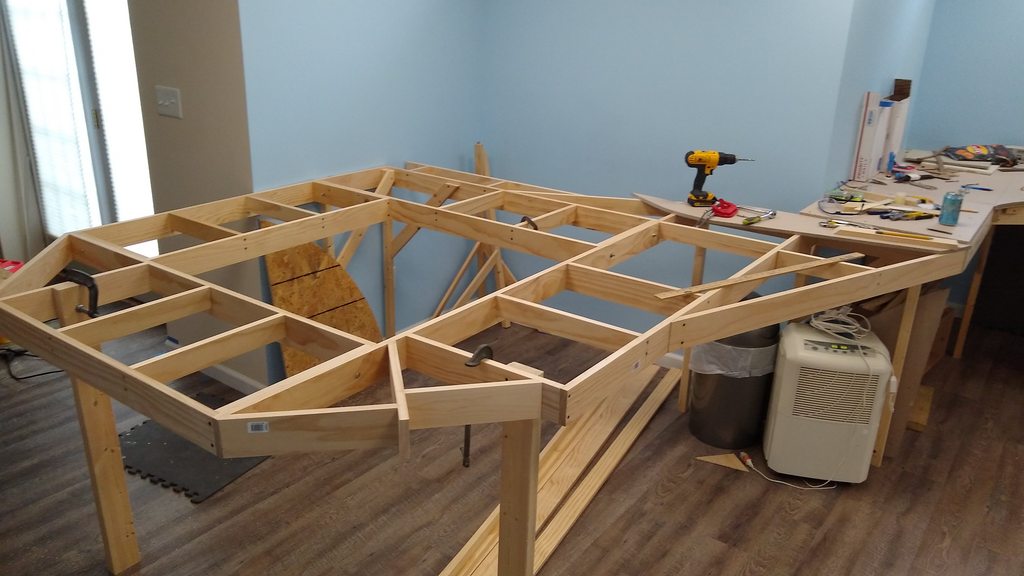 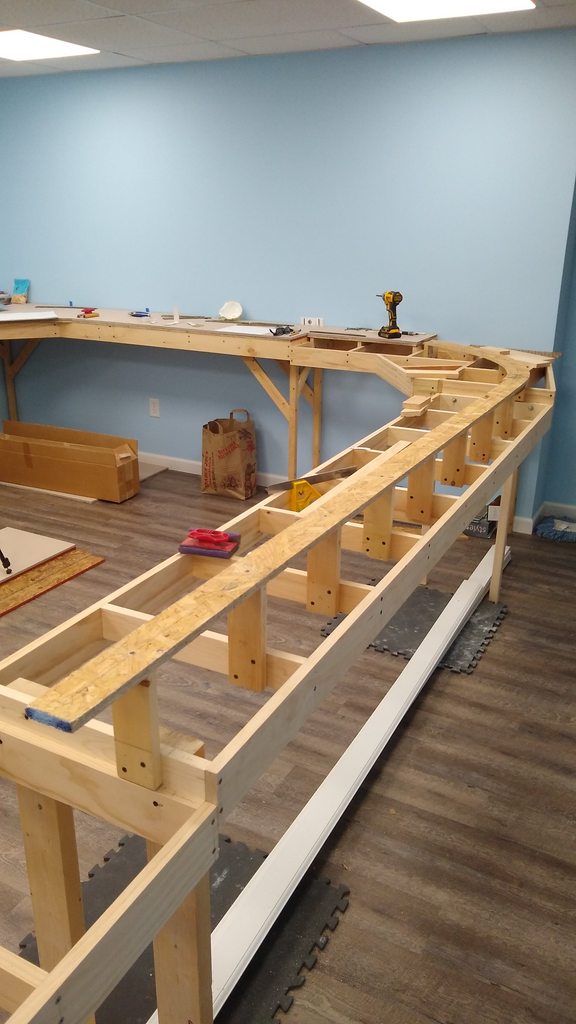 Most recent section of bench work under construction. 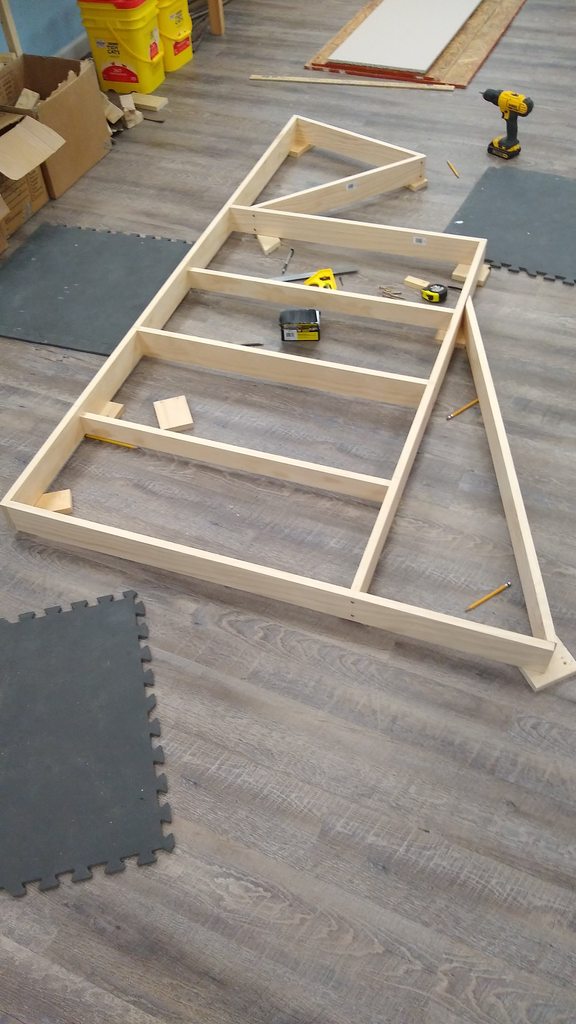 I picked up some extra lumber last weekend in case Lowes gets shut down by the gov for Corona..

man...looking at all of these makes me want to get the last kid out of the house to college even quicker!!

then we will be looking to move to some land out of the city...will hopefully get a big basement space if all goes well...she gets the first floor...I get the basement for trains, band equipment and sports cards!!

Mine is in a 12' x 11' spare bedroom that I took over after our daughters moved out. It's currently only on two of the walls, but I may expand it into the area with the bookshelfs later. 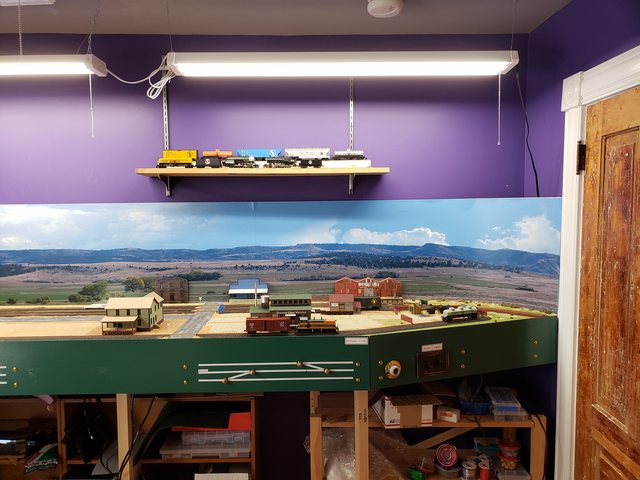 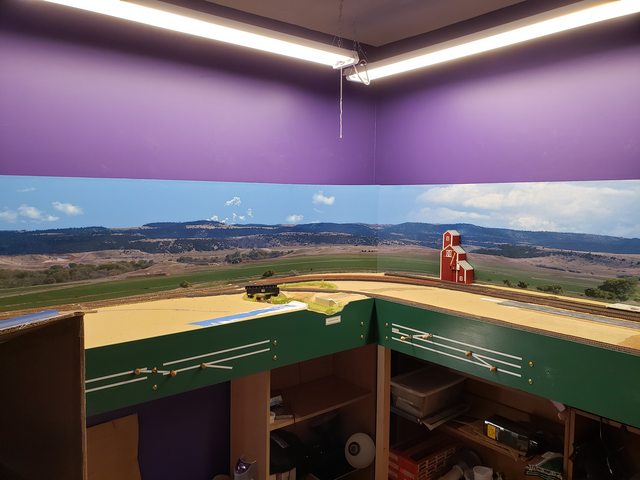 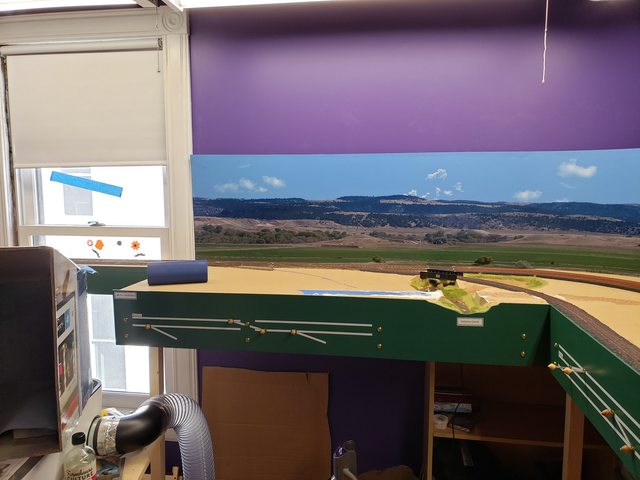 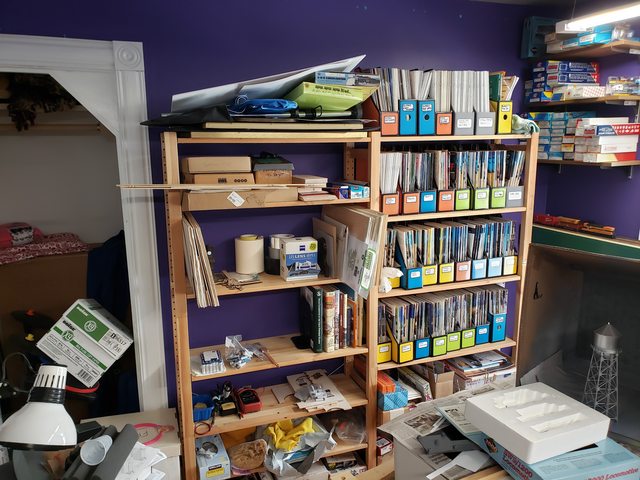 We are currently living in a big, old house and are considering moving in a few years. Having a good space for a layout is on the list of features for a new house.

My layout is in the Train Room. duh