I know there is already a trend started about removing paint and decals from engines but I don't want to get off subject in that one by asking another question. I am wanting to know if there is a way to just remove the decals (IE the numbers) off of an Athearn blue box unit. I would want to keep the paint and such, I just need to get the numbers off to renumber it (and possibly add a flag to the side).

I heard that a simple pencil eraser will take off the Athearn decals, can anyone confirm this or does anyone have any other methods for the safe removal of the decals? Thanks.

Staff member
Well I've just checked six of my Athearn (blue box) and I'd say the logo's and numbers were painted on using a mask, not decaled. Under magnification there are spots where the base color is showing through. Noted when I'm stripping one for rebuild, let's say a silver body and a red "Santa Fee" lettering, the silver and red would be gone from most of the body leaving the Santa Fee lettering in silver, which then required another application of fluid to remove it.
My guess if it's just a number you want to change then one of those gray colored erasers might work. I just strip the paint from the whole body but that's not much help to you for your problem.

Use COMET, you know the cleaning powder that comes in that green tube box, you get it at the grocery store. Dip a Q-tip in water, dip it in Comet cleanser, and rub off the lettering you want to remove. Take it easy though, don't scrub too hard or you remove the paint. 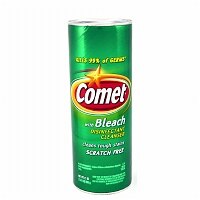 I just did a bunch of Athearn lettering removals the other day, this really works!

Disclaimer: It may leave a glazy rub mark, but overspray it with glosscote, then dullcote, weather and you'll never see the difference.
Last edited by a moderator: Mar 27, 2006

I used to use a sharp blade on a hobby knife and a little patience. It worked well too.

Over the years I have tried just about everything for removing decals & I found that Comet w/Bleach works the best. It doesn't take much & don't make it too wet or it will run down the body & fade in a streaked matter.
mtrpls has the right idea.

I agree with the Comet idea - works really well! But do be careful. I was doing this the other night on a locomotive and the yellow paint in the back was coming off easier than the red numbers...!

I want to thank everyone for the replies. I got the lettering off last weekend but finally put one side of the decals on last night. The photo below show my progress. I realized the flag was the wrong one (it is from an SD70M and I should of used an AC4400CW flag) but I didn't have the AC4400CW flag decal sheet so I put the SD70M one on anyway and figured I could change it later if I wanted.

One thing I do now regret is leaving the 9 and 8 on the cab. I should of took all of the numbers off and redid the entire number.

Looking good! Love when people get into discussions like this!
S