Staff member
Today's view of the toilet paper department at my local Kroger: 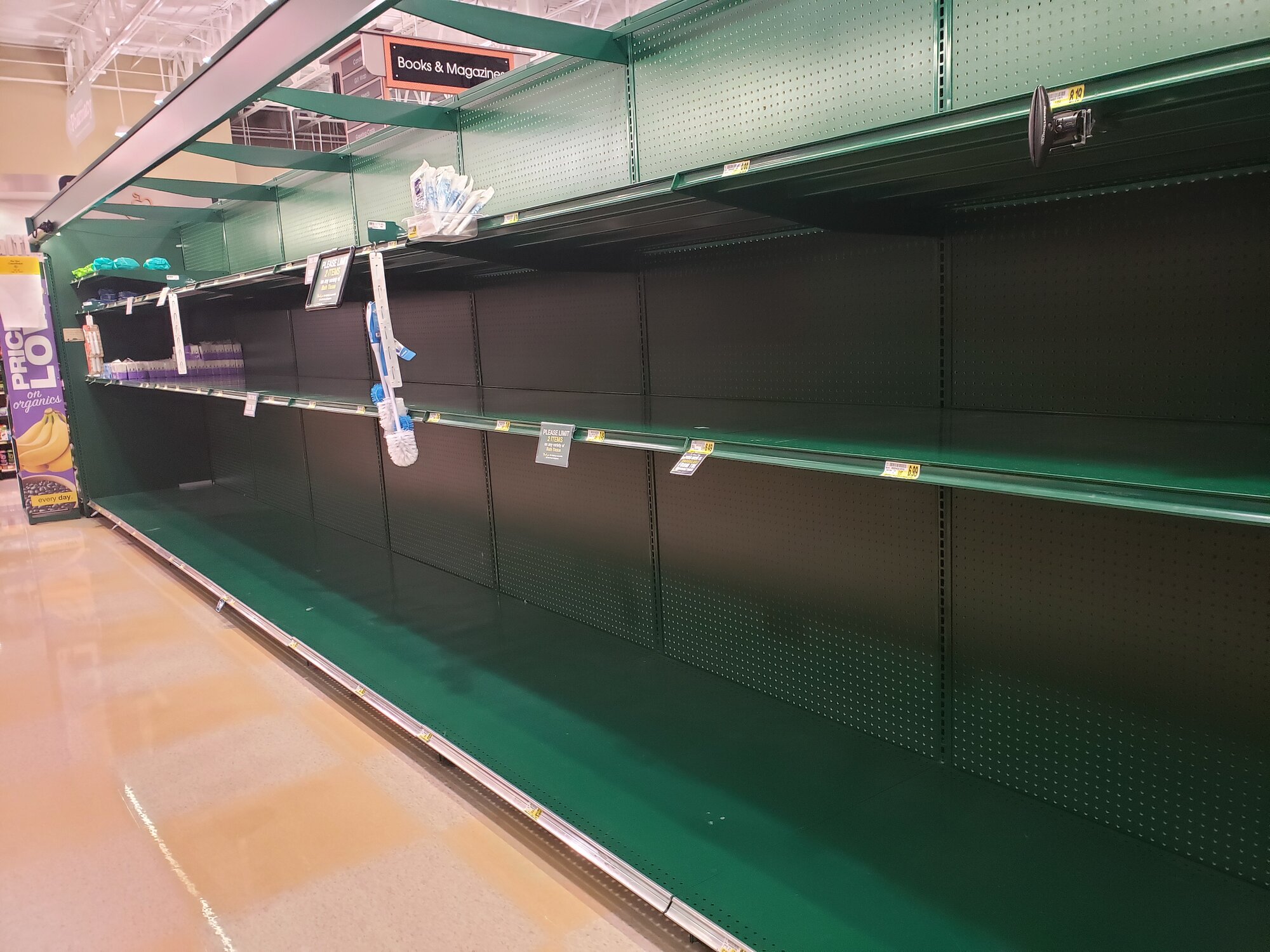 The entire supply is wiped out evidently. .

IronBeltKen said:
Hi Shop Dwellers, 80*F and cloudy with a SSW breeze in my central Maryland neighborhood. Predicting scattered t-storms for later, probably won't get them though.

Thanks for the "likes" and/or comments on my pictureless Wednesday post - Hughie, Guy, Karl, Patrick, Louis, B.Bob, Garry, Curt!

Curt - great looking power plant! I have that kit with the walls painted but not yet assembled, I'm going to make it a repurposed structure with shrubs and trees growing up between the rails of the abandoned spur...someday. All my coal traffic is going to the coke ovens.

William - great to see you here! Have you been in touch with Carey? How is he doing?

Not much of anything new to report mrr-wise, still waiting for Atlas to ship the remaining detail parts I need so I can continue with the loco restoration project. In the meantime I've been chilling with a number of live performance videos of my favorite rock bands from the 1970's, some of them are nearly 2 hours long - real time-killers! Of course I've also been gradually de-cluttering the layout surface from all my scenery paraphernalia in twenty-minute time chunks, all I can handle without feeling overwhelmed. Been enjoying everybody's layout and/or proto photos, I'm hoping to be able to share some of my own within the coming year.

I'm also waiting to receive a model of a sound-equipped GP38 that I got on eBay [hope the vendor does a better job of packaging mine than they did with Justin's! ] The order tracking said I was supposed to recieve it today; but the USPS Regional Distribution Center (RDC), that's ~10 miles from my house, didn't send it to my hometown post office. Instead they shipped it off to another RDC on the Eastern Shore that's ~70 miles driving distance in the opposite direction! First I assumed it was another USPS screw-up, then I remembered another one of my orders following the same convoluted route from the same RDC two weeks earlier. So maybe that's just the standard route for that particular truck or driver? Last time I checked, it had been sent back out from the Eastern Shore RDC after sitting there a few hours - hopefully en route to my place[?]

Nice weather predicted for tomorrow, so I'll be on the riding mower instead of the in the trainroom.

GarryCBQ said:
The entire supply is wiped out evidently. .
Click to expand...

Although that sort of looks like my local Publix. William.

I finished up the mill build this morning and after lunch I started the small Walthers concrete coaling tower. I got everything painted then assembled the office and coal dump shed. This is the last pre-build before I start on the layout . I do still have a roundhouse and ME bridge supports to build but they will be built on the layout. Today in the mail I recieved 350 half inch wide 3 ft long cardboard strips for upcoming scenery.

Thank you to everyone for the likes on the power house.

Louis- I hope you get over your Gout quickly.

Willie- Thank you. I look forward to seeing your new addition.

The photo color is off. It's actually a rattle can of camo sand. 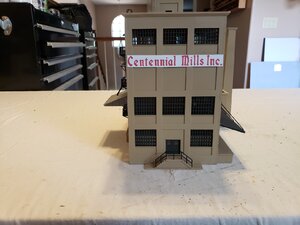 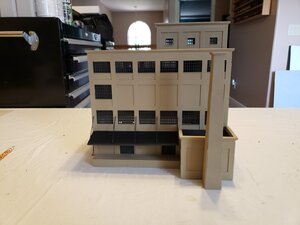 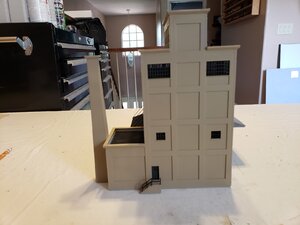 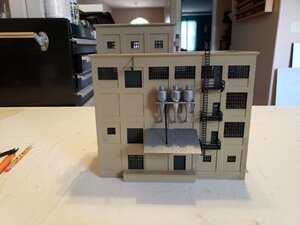 Thanks, good to know! He was having some major health problems when I last visited him in the summer of 2012 [during a family trip to visit my sister-in-law in Pell City], and I haven't seen him posting anywhere online.

L&N Castle said:
Gee Gary,you're really on a"roll" with that one.

GarryCBQ said:
The entire supply is wiped out evidently. .
Click to expand...

What are the two things the starship Enterprise has in common with a roll of toilet paper?

They both circle Uranus and wipe out Klingons...

Staff member
This just came across my desk. Gives a new meaning to "crash test dummy"

Good evening everyone. The rain forecast for every day this past week never materialized. So I had to irrigate the lawn. About 30 minutes per section, with 10 sections. because of favorable conditions and good water pressure, I was able o get nearly 100% coverage. I also hoses the truck down, to remove some of the yellow pollen. Spent a lot of time out doors , with this and a few other chores. Plan for tomorrow, is to trim the forsythias, then take all the brush and leaves to the recycling center, and get back in time for the Lutheran Services our local congregation offers streamed on FB.


PRR Modeler said:
I think what you're trying to say is "no standardization" instead of "no standards"
Click to expand...

Curt: Maybe too many "standards"? Clarification: The slogan "Standard Railroad of the World" dates to the 1920s or a hundred years ago...By the end of World War 2, the PRR's management had lost direction, and the PRR was no longer the "Standard" Railroad
The Flour Mill looks very nice...any problems with the assembly? I have one to assemble in the near future.

Willie: perhaps some urban scenery would work for a backdrop?

Ray: Great photo. I thought it was a grain elevator, rather than a cement plant. Pays to Sthe caption.

Terry: Somebody has to have some, why now, all of a sudden?

Anyone ever heard of Esplen (PA)? 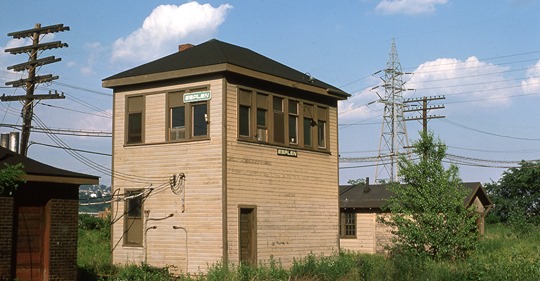 Beleve it or not this tower and out buildings, is located in the center of Pittsburgh, PA. It locates at the South End of the Ohio Connecting Bridge where the Scully Branch leads to the Panhandle. I was there once many years ago, under unusual circumstances. 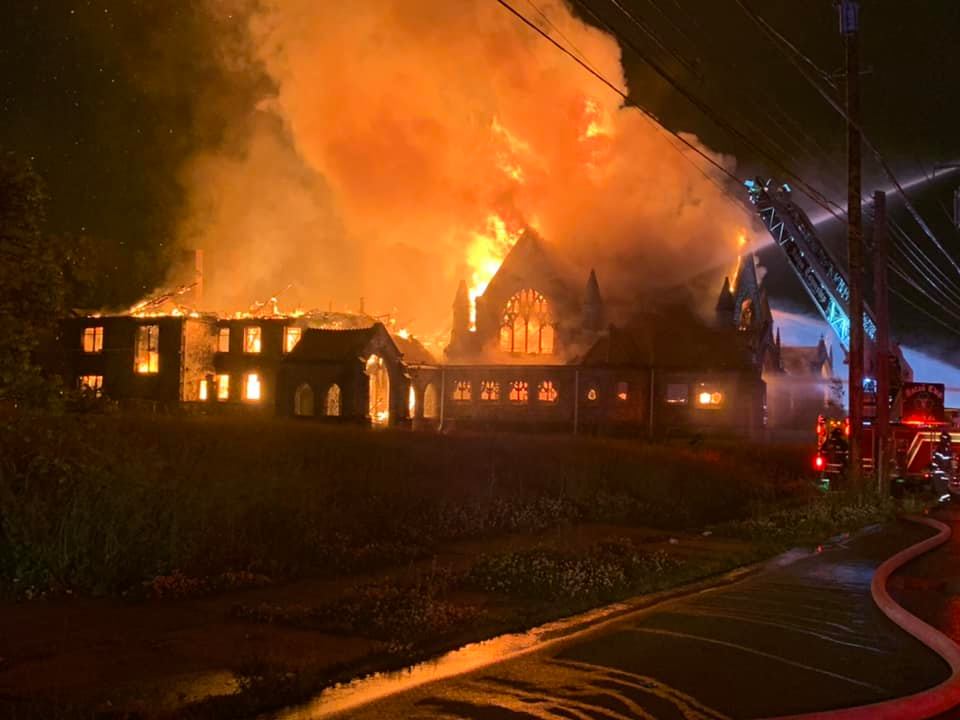 The photo was of a Five Alarm fire which engulfed the Third Presbyterian Church of Chester, PA (My old Department), beginning at 2:00 AM May 28, 2020. The Church was dedicated, in 1896 and remainedin use as a House of Worship, until 1990, when it was repurposed for other church outreach programs. In 2019, it was placed on the National Register of Historic Buildings, and ownership was transferred to a local preservation organization.
The cause was determined to be Arson. Ironically, the fire occurred on the anniversary of the death of John Calvin. 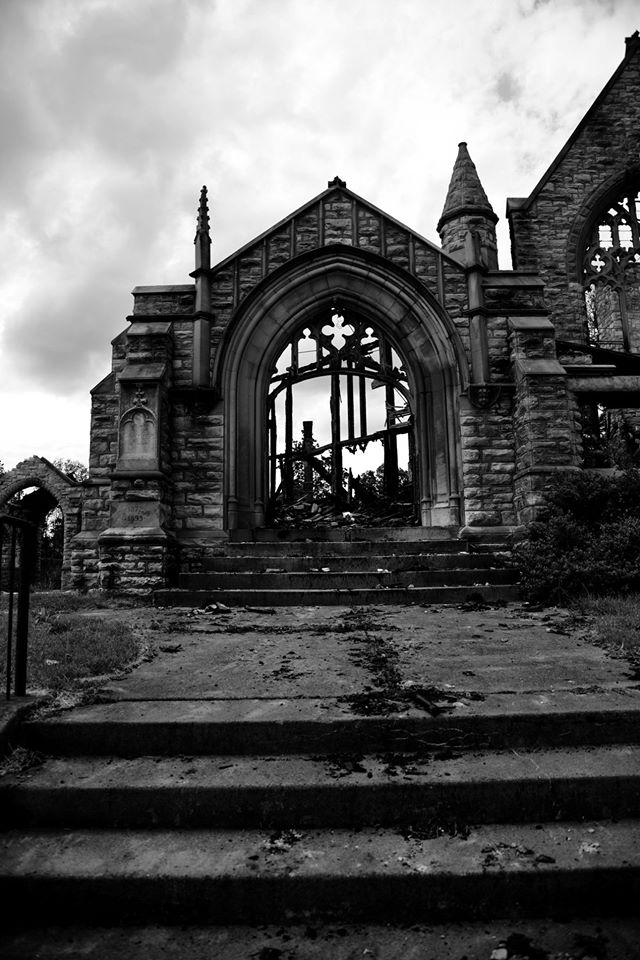 Hate to see ANY house of worship destroyed.

Damn, why can't a Clear liquid diet include VODKA or TEQUILA INSTEAD of Magnesium Citrate ???
Wish all pleasant dreams
Phil 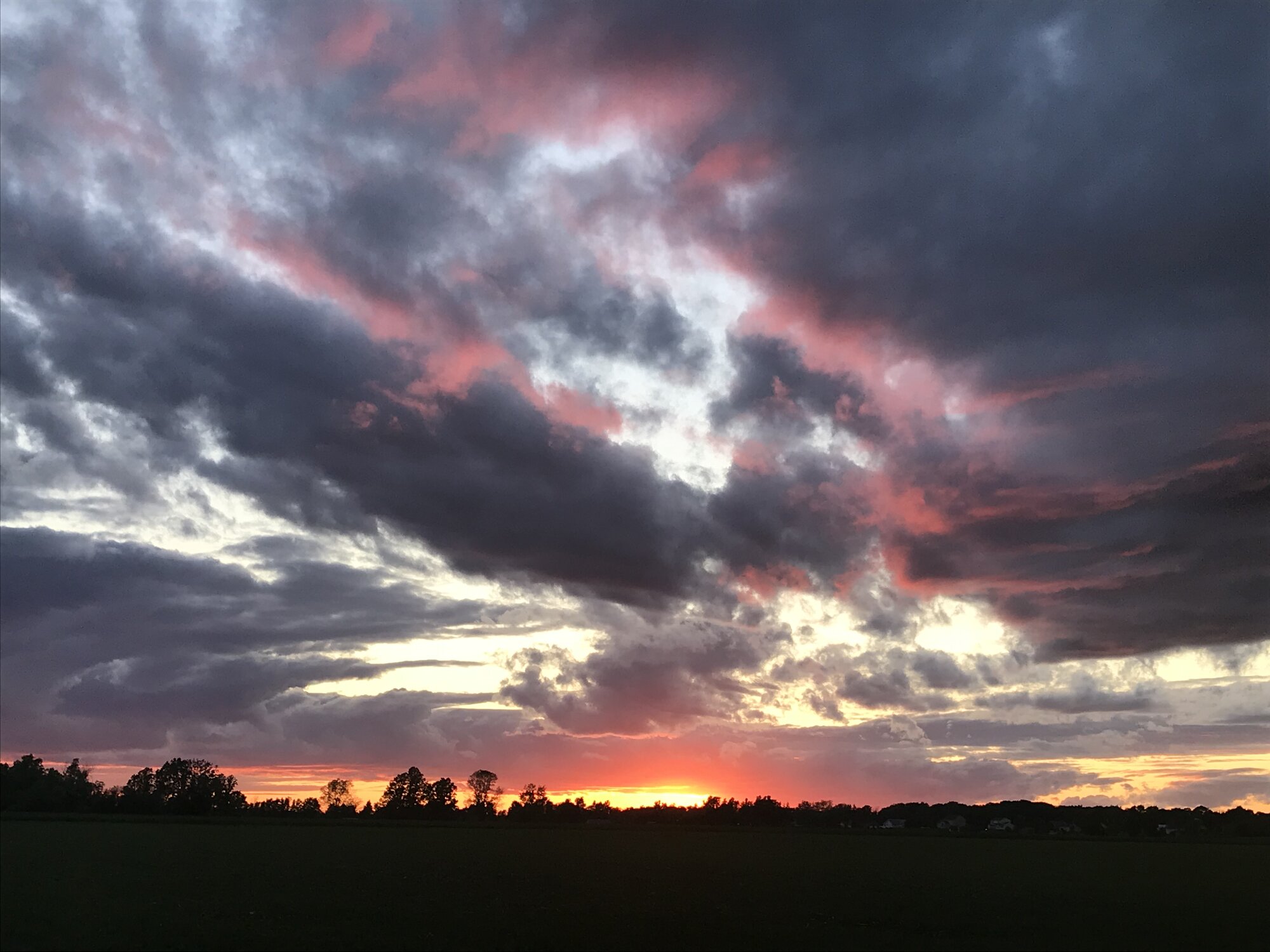 I have been doing a lot of fishing guys don't hold it against me. My cousin son has been going with me and I have been teaching him the ropes. He is doing well as uou can see. He got his 1st big pike on Lake Champlain. 48 inches. The 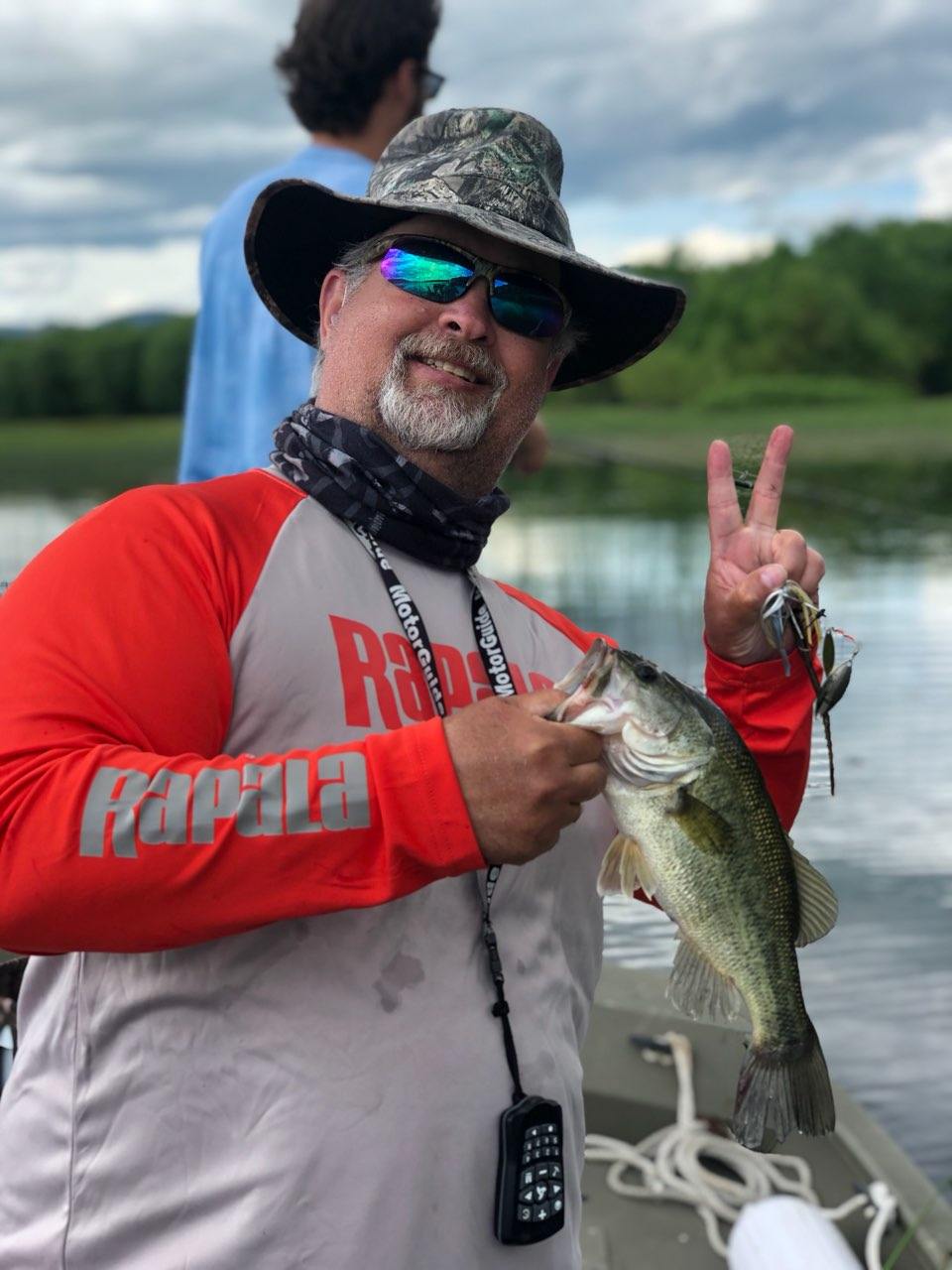 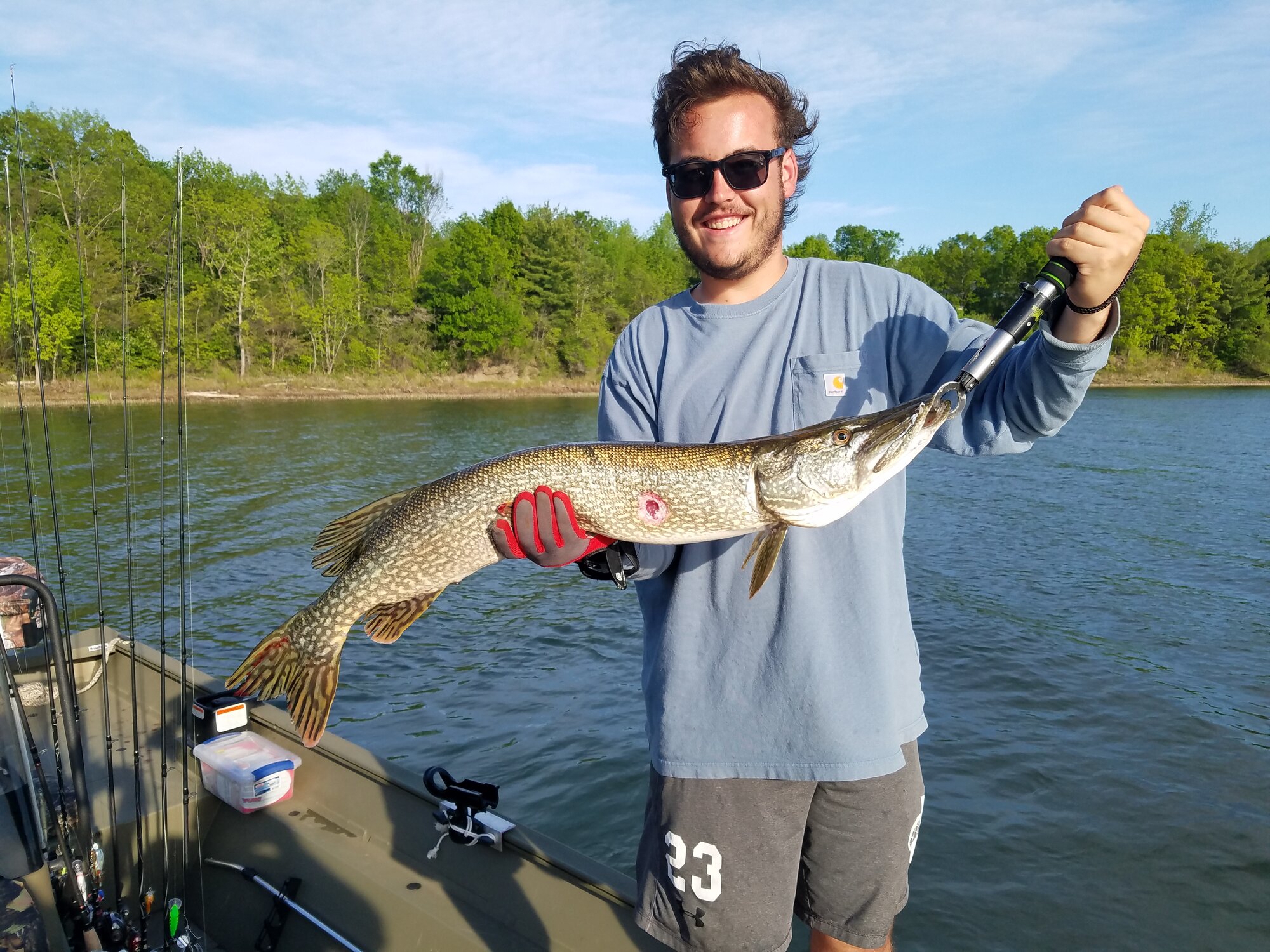 smile says it all.
F

Damn- it looks like a "CUDA. Congrats . Now ,if he can model trains as well, WOW!

Flip said:
Damn- it looks like a "CUDA. Congrats . Now ,if he can model trains as well, WOW!

Trying to create that bond by making memories. He has seen my layout progress. He is not quite there yet but is ever slightly interested in my progress. He was over a few times and we ran some trains. So we shall see. I am patient enough. Let him come into it on his own. I don't like the idea forcing things etc. Same with the fishing. I do my best to give all I can for results and enjoyment. Time will tell. Me not having kids of my own is different. I do have 3 godsons and 1 of them is interested in both fishing and trains. He lives in Alabama. I talk to him weekly. I also visit him once a year. I have 3 nephews but none of them are interested in trains or fishing. The 2 youngest do like to go shooting with me though.

Staff member
Good morning. It's mostly cloudy and 63.
Yesterday, I got out the hedge trimmer, and was trimming the bushes around the house, when I discovered a wasp nest in one of the bushes. No need to ask how I made that discovery... I did manage to avoid getting stung, somehow. I'm going back in a few minutes before they are fully active, and see if I can trim any more before getting them riled up again.

bnsf971 said:
Good morning. It's mostly cloudy and 63.
Yesterday, I got out the hedge trimmer, and was trimming the bushes around the house, when I discovered a wasp nest in one of the bushes. No need to ask how I made that discovery... I did manage to avoid getting stung, somehow. I'm going back in a few minutes before they are fully active, and see if I can trim any more before getting them riled up again.
Click to expand...

My Williams by Bachmann PRR Congressional passenger cars are running, albeit a little slow being pulled by my MTH Canton Railroad SW 1500. The train looks good on these O84 curves, not even a flicker in the passenger cars. I cannot wait to see it being pulled by my Williams by Bachmann 5-stripe, Tuscan red GG1. That will have to wait as I have already put away the GG1, more motivation to keep making progress in my train room.

The only reason my MTH switcher is still on my little 9’x7’ test loop is because I have not yet tried out the MTH remote commander. It is hard for me to get excited about MTH.

FYI: I decided, to hell with MTH’s recommendations that don’t list any modern Lionel transformers. It is running simply fine powered by my Lionel ZW-L.

I love the sound of a train in the morning! It is a pleasure to watch a toy train run.

This gout flare up is stubborn! I am living on tomato sandwiches and it still lingers. It has gotten better and moved from the first big toe joint to the second or knuckle joint of my left big toe. That made it safe to cut the lawn, front and back. As bad as it was, I was concerned about permanent damage. God knows I have enough of that in this half broken down old body I abused for far too long.

The sun was strong yesterday, now my face looks a little like a tomato. The humidity was much lower than earlier in the week making it pleasant outside.

All in all, I feel great, time to do something constructive. That reminds me I have a big box on the back porch from Home Depot that FedEx dropped off sometime last night. I wonder what is in it. Opening the box will be first on the list and depending what is in I will see what I get into next. That is after I put away my PRR Congressional.

Have a great day Everybody!