Staff member
(I tried to upright one of Dave Banta's photos, but could not get it to return properly in the lineup! Please excuse me from my mistake - The original post was made by Dave Banta (logandsawman)

Will begin on the Locomotive project, purchased this 0-4-0 brass on Ebay several weeks ago. The price was $72.00 and it fits in the era with the depot project completed earlier.

It will be part of my window display for now, then will go on the layout.

After completing the research NP had a similar model which was photographed in St. Paul and noted to run to Taylors Fall, which is a spur from the NP mainline in Wyoming. I will follow that color and number scheme.

Here are the initial steps of the project 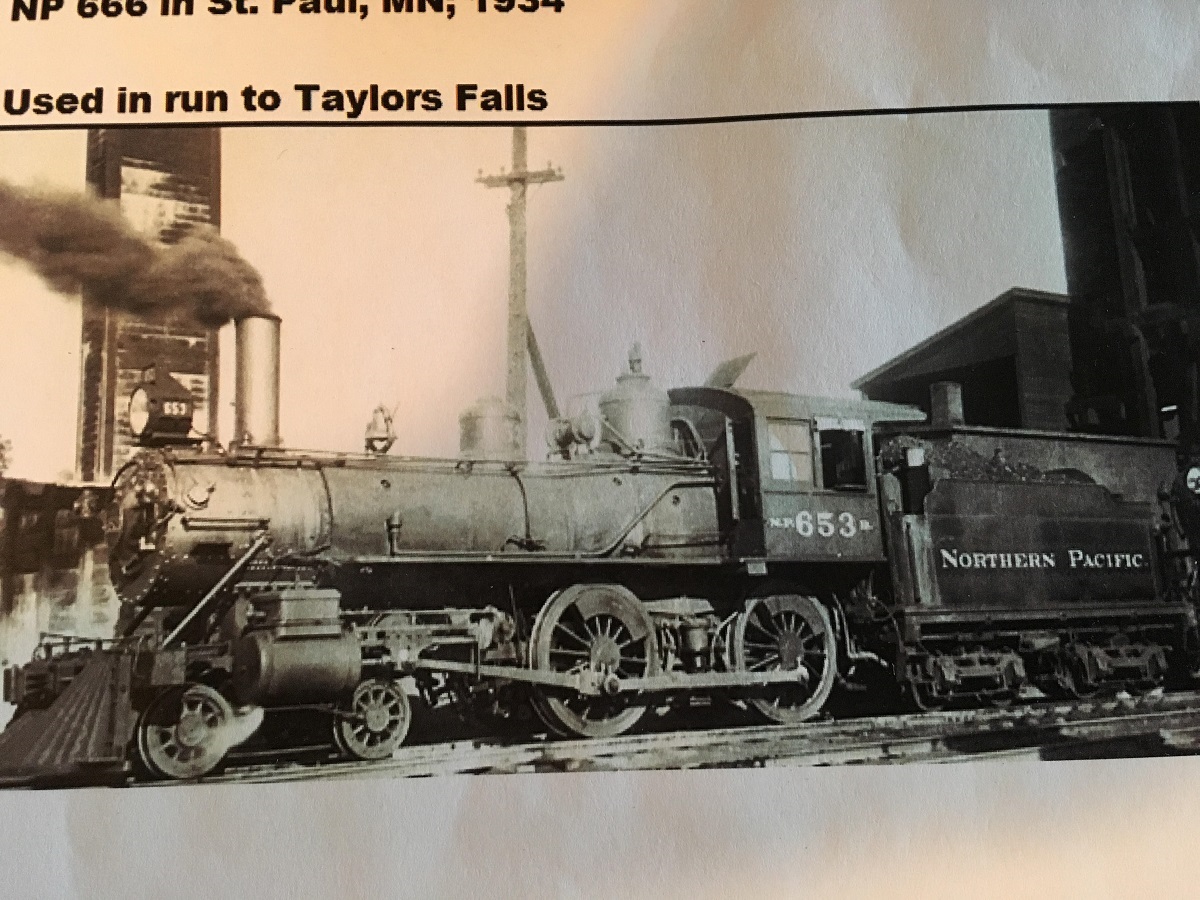 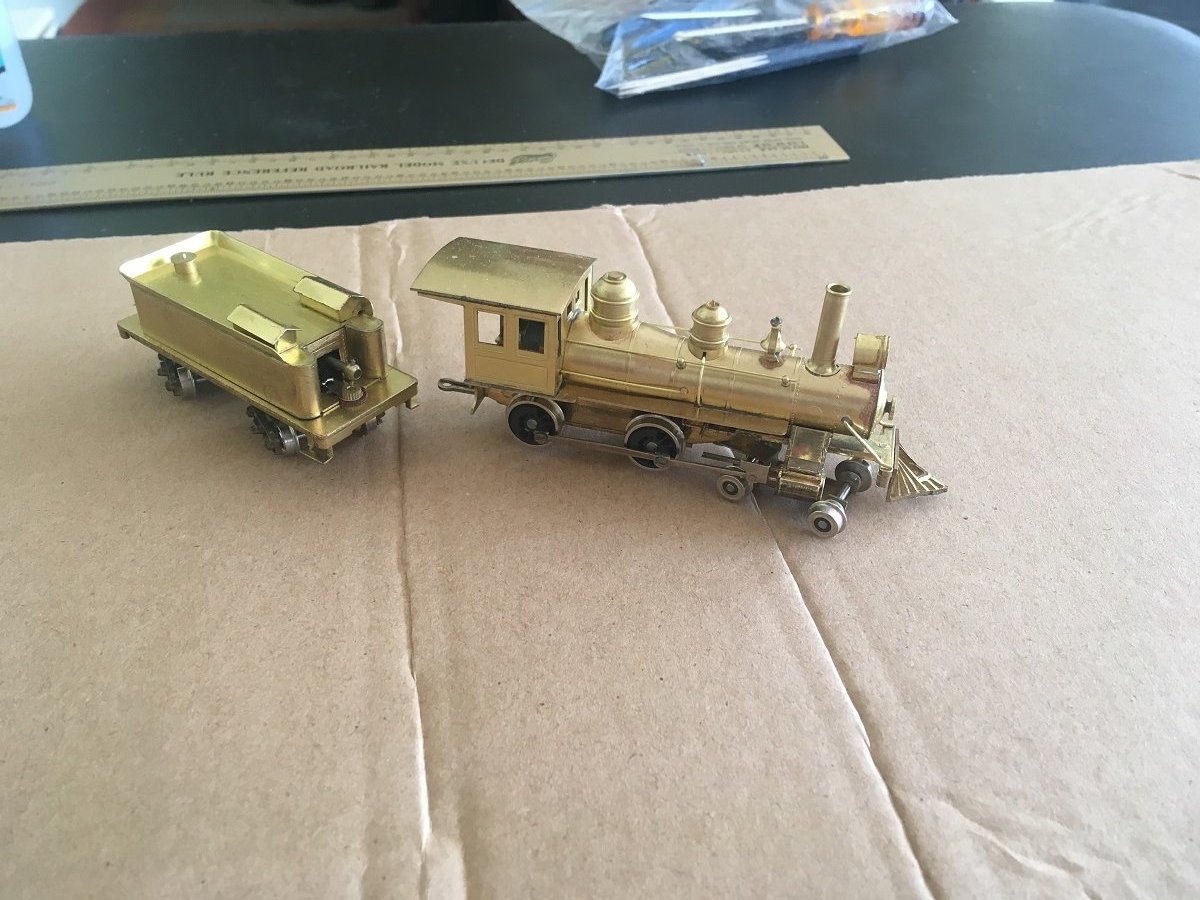 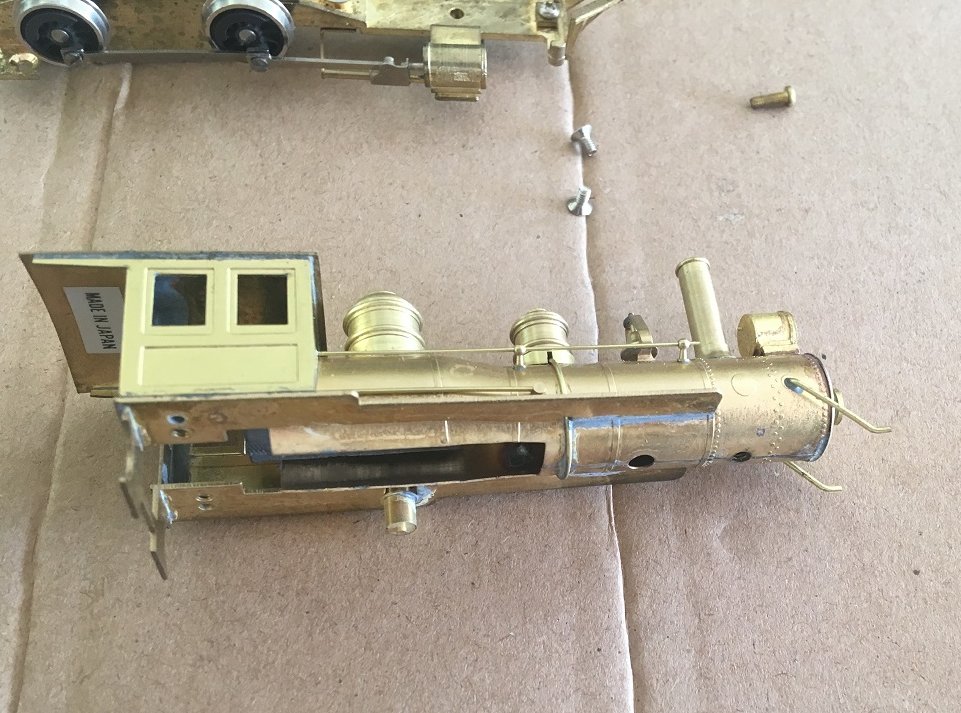 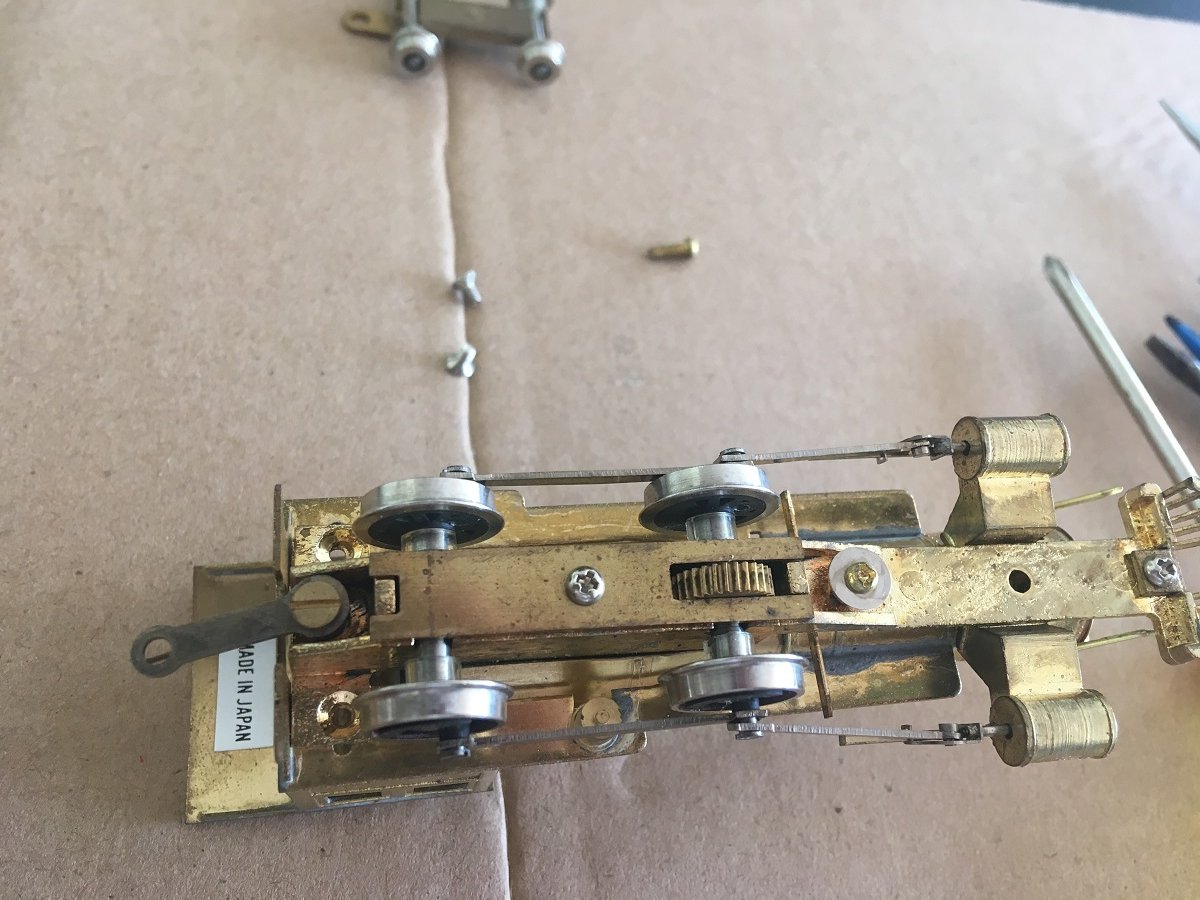 Hi Sherrel, I couldn't get the photo straight, on my screen it was oriented properly but couldn't transfer to the site properly.

Thanks for getting it. Dave

Here I am getting some of the paint down. Have masked off the black first then the gun metal so I get the two colors right.

I can't believe how simply this model was made. As I remember, my plastic Bachmann consolidated was way more complex to disassemble.

Also, a couple areas that unscrewed I could paint properly: 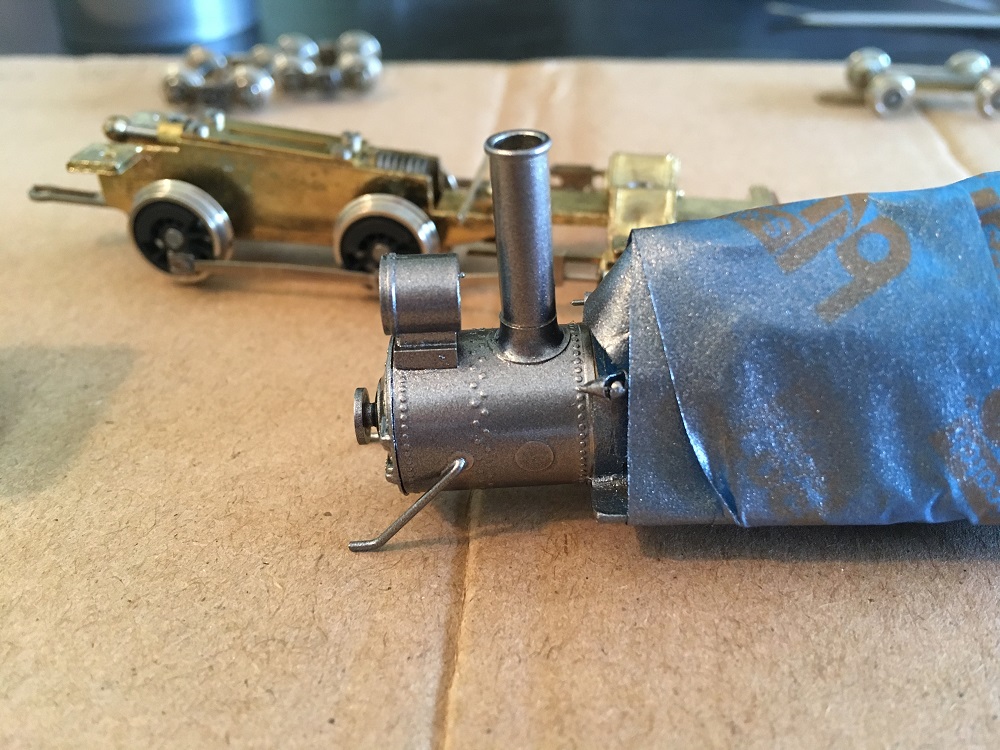 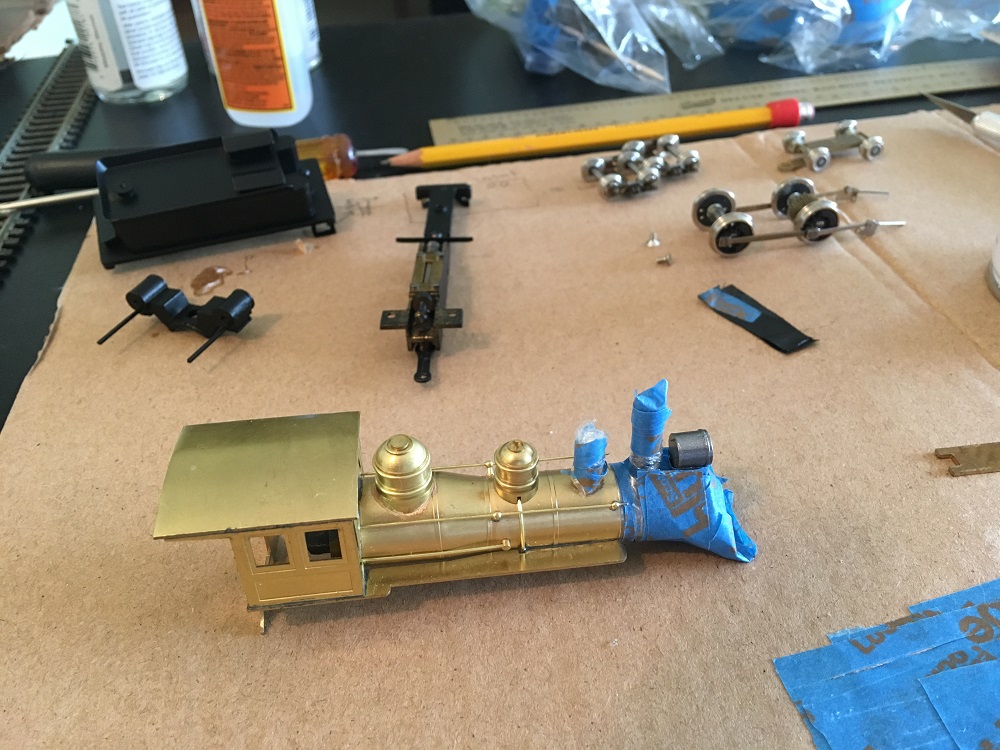 Staff member
WOW - DAVE, You are going like a California wildfire!
Better watch it, or you will run outta projects?
Have you started sketching plans for that excellent space?

It seems to me like it is going slow. There is a ton of waiting between coats and things.

1) I have to assemble and paint a NP caboose next, to fit the display.

2) Then I have a few buildings that were damaged which will be worked on.

Working on the layout plans in my head, mainly be a big oval track with the Wyoming module fit in which is a few pages back and a couple more city sidings, including Groningen, which is also posted previously and is a simple rural siding which I will put on the layout.

Mainly I want a long track to run the train some distance on.

I am getting some work done on the 4-4-0, finished the "rough" painting and getting the decals positioned.

First I tried these larger letters on the headlamp, then decided to strip them off (masking tape worked) and get a smaller font.

Yet a smaller one is included with the decal pack but they were super hard to handle.

I had to put the decals on in stages because they tended to slip and move if I worked next to one that wasn't fully adhered: 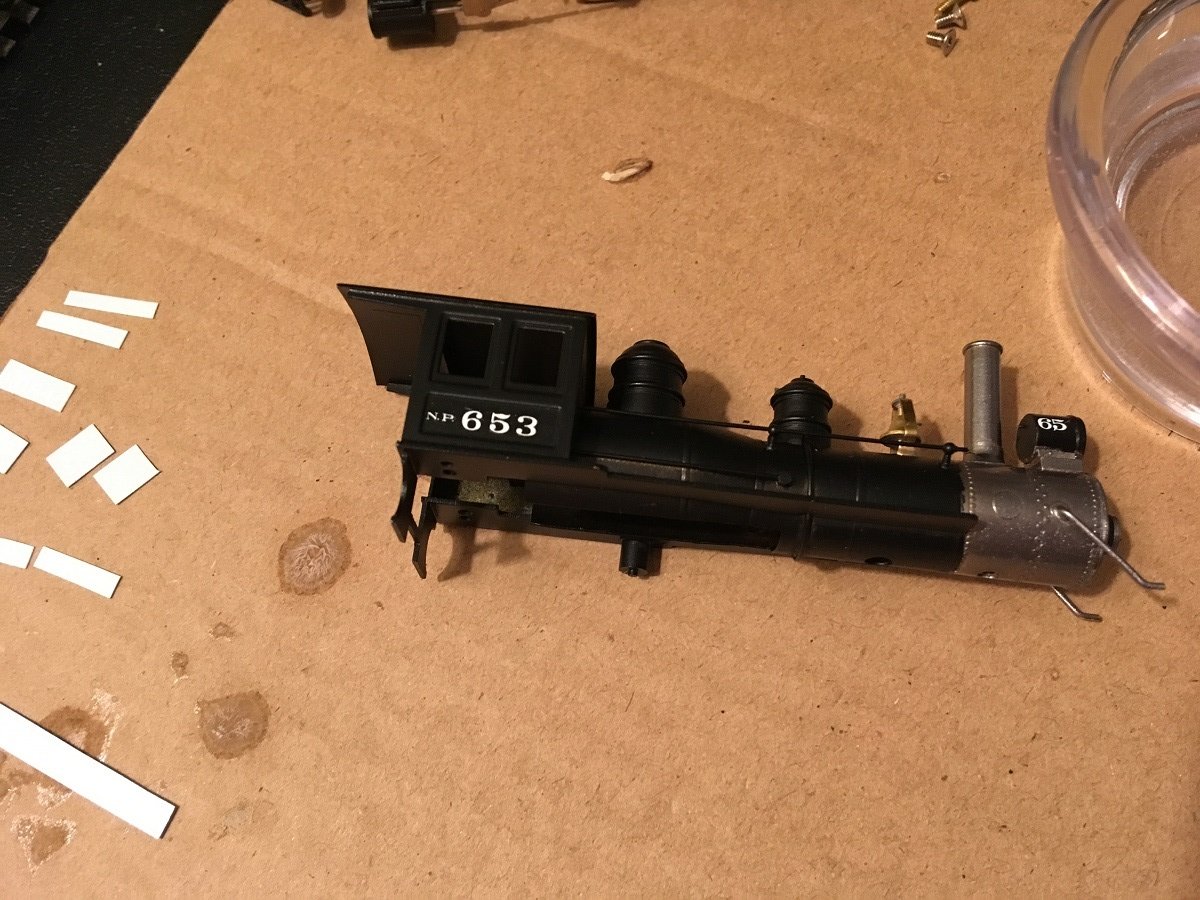 above, first attempt, had to put the letters on one at a time and wait for them to dry or they would move when I added another. Also, removed the headlamp numbers to use smaller ones 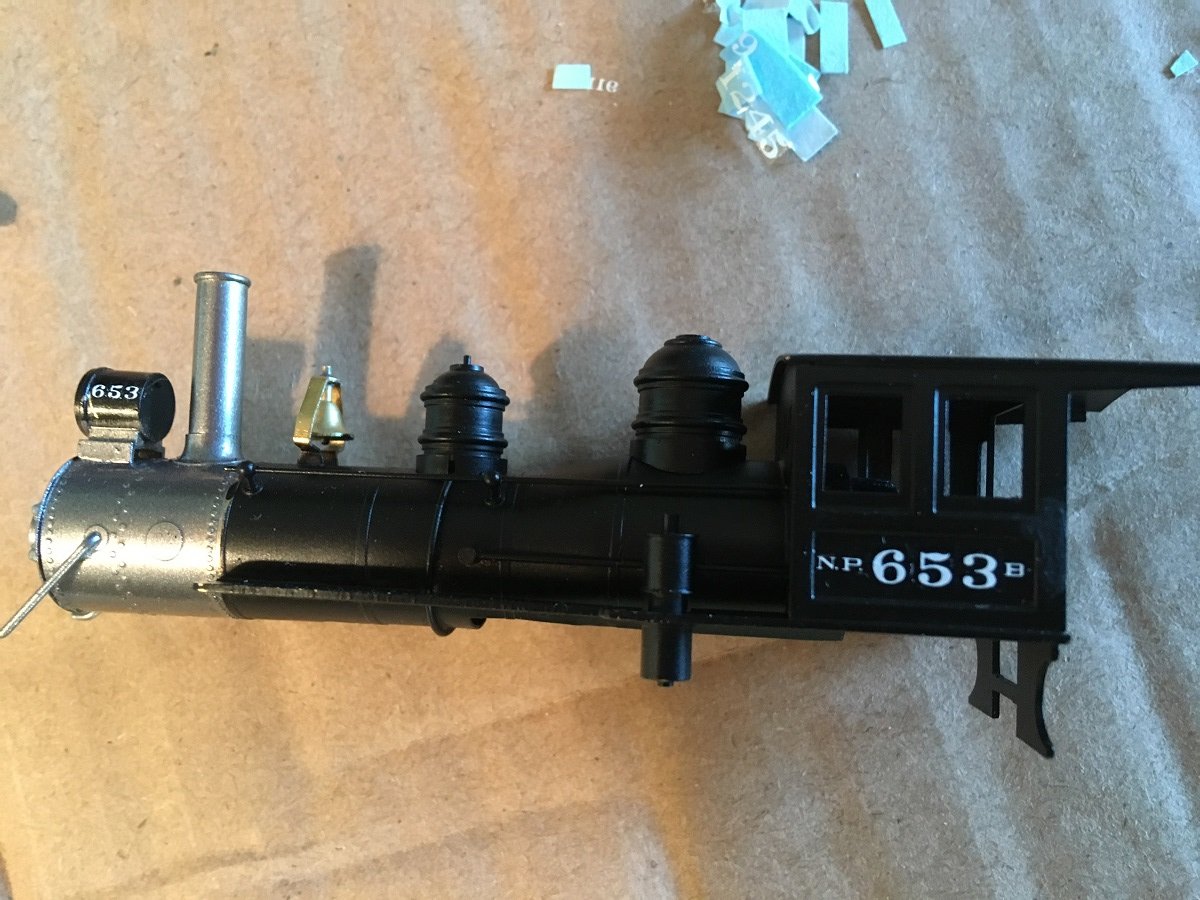 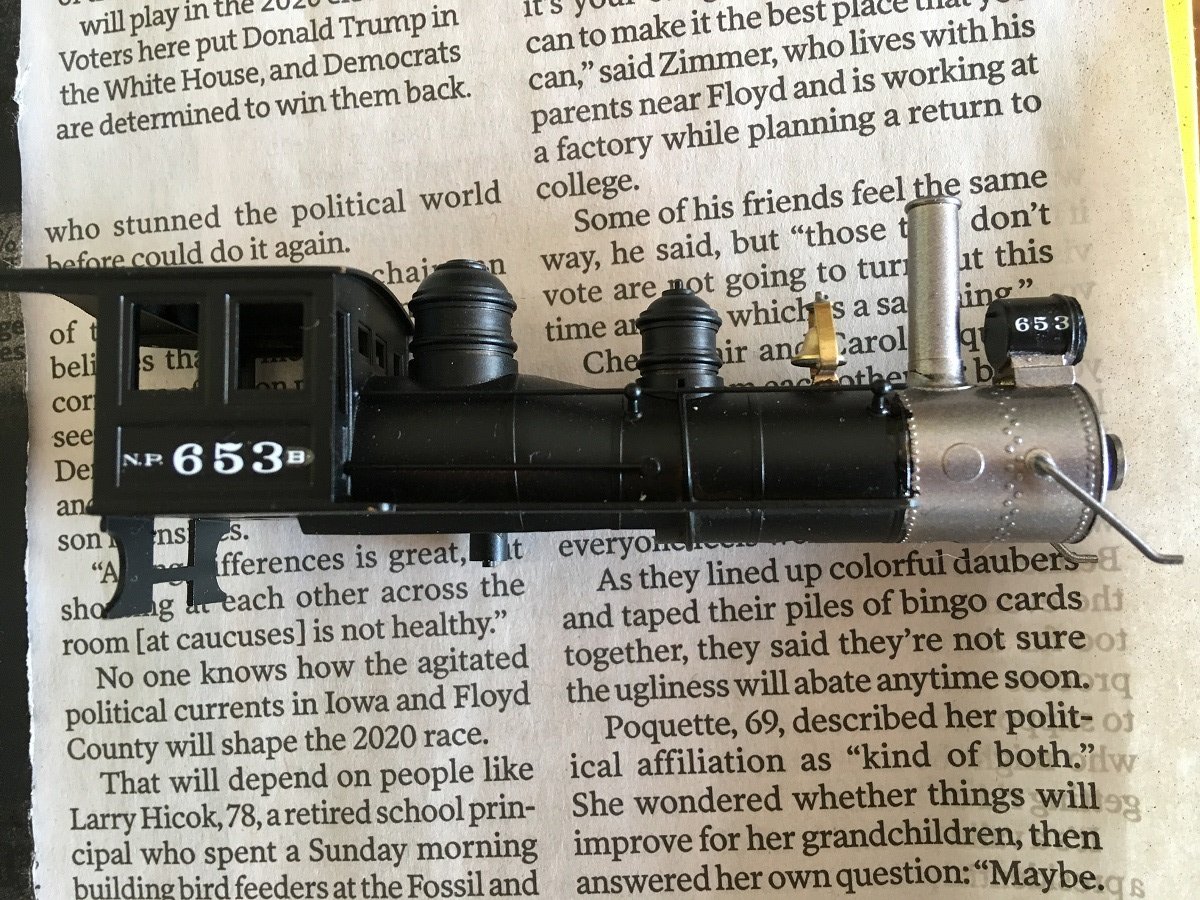 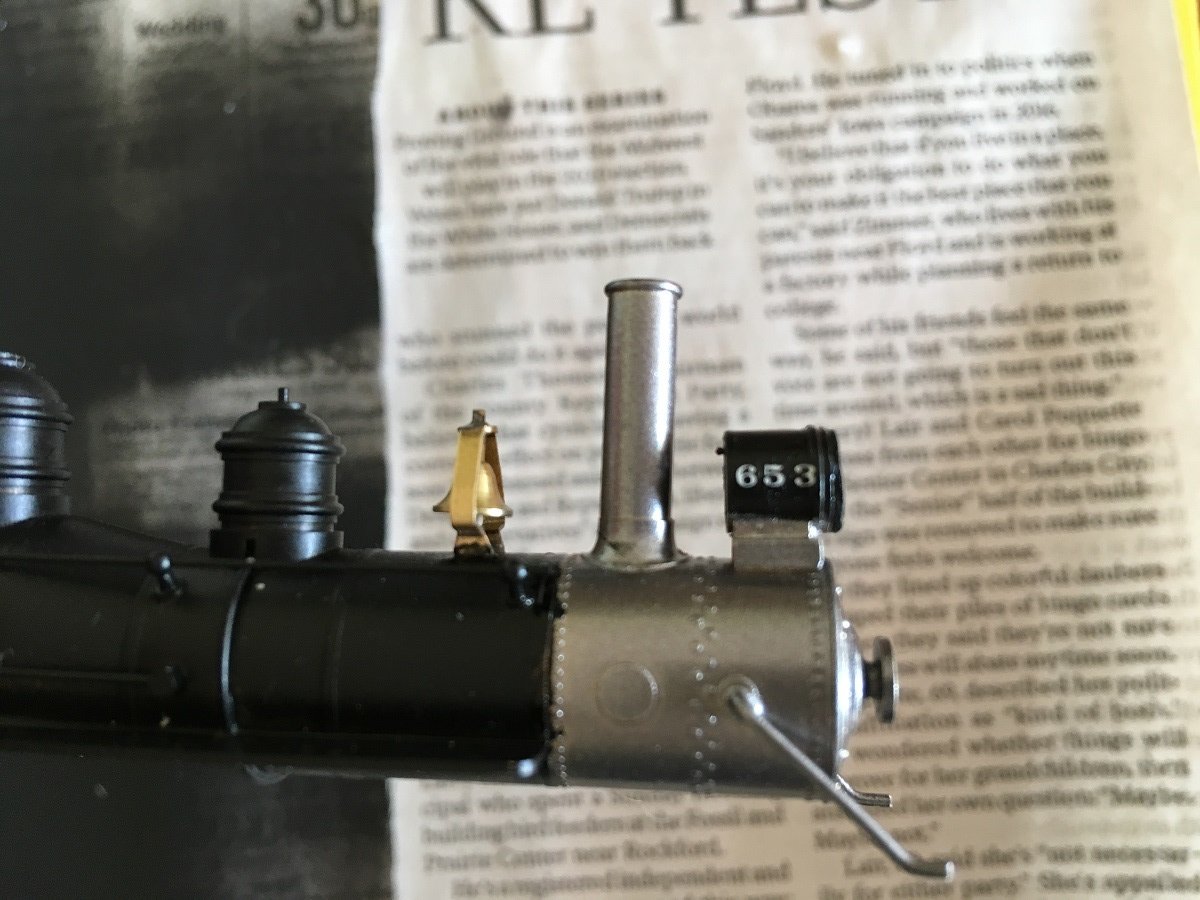 I used some plastic for the lamp cover, painted the edge black but otherwise the lamp has a plastic lens cover 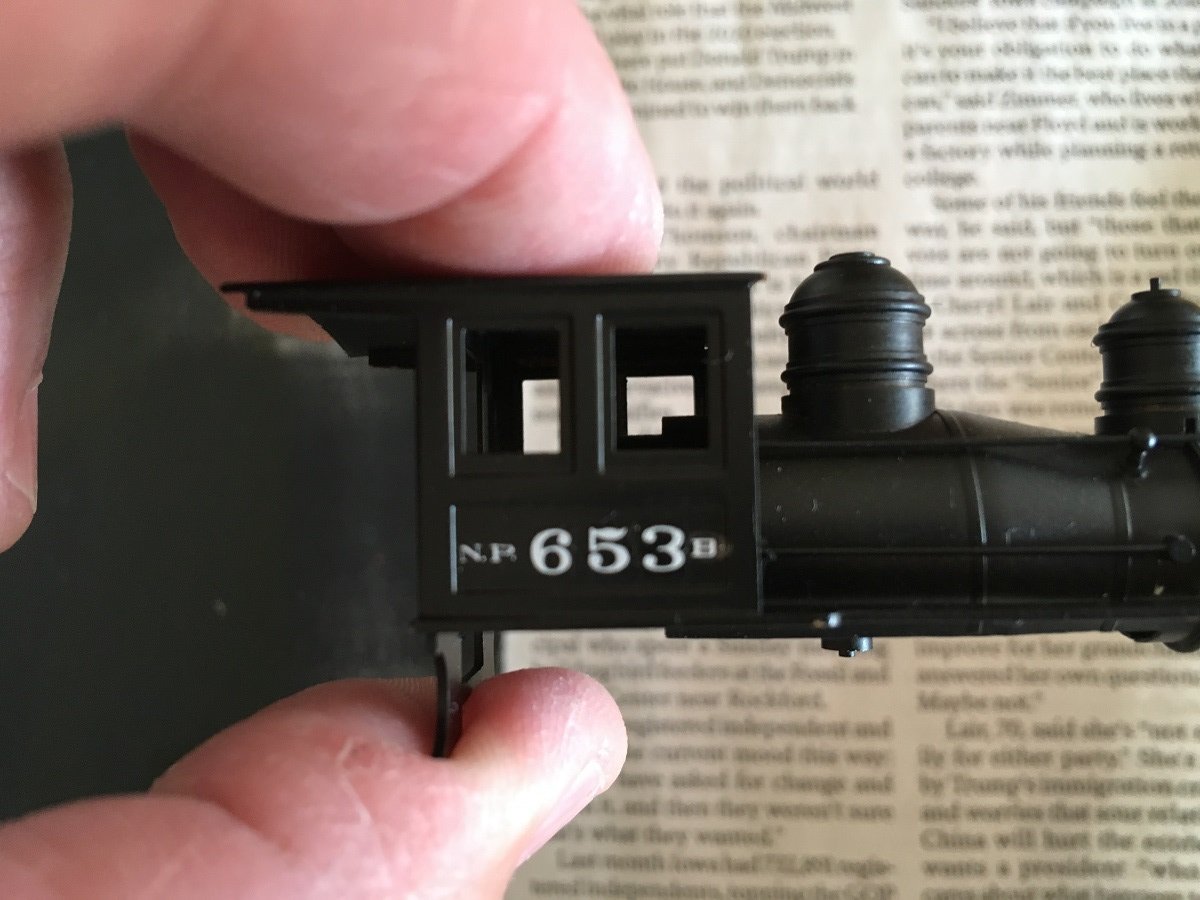 As a final step will use Dull Coat also

Coming along nicely. Like the little guy. Should fit right in for your time period.

thanks guys, I successfully got the last of the decals on this evening, however will photo it tomorrow (concerned if I bump it one may slide off

Thanks, Sherrel; here is some more progress on the painting project; the tender went through several coats of paint, some powder, and then dull coat.

It isn't perfect but I am satisfied with the results. To do it over I maybe would have recoated the one side and done the decal over (I have extras), but at some point going over and over does not produce any better results: 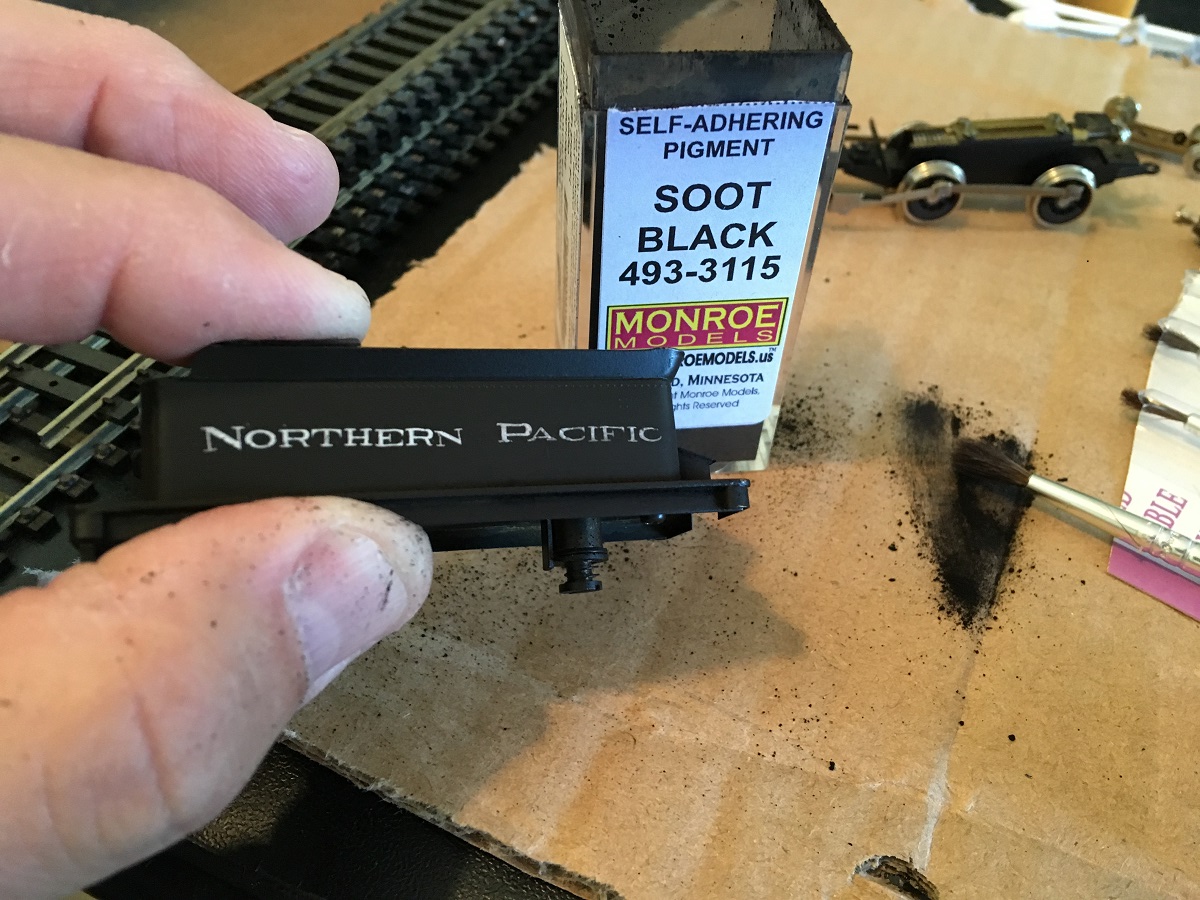 I ended up with a couple scratch marks in the close up, couldn't honestly see them after I did the soot.

The above photo is the other side. In the bottom one, the dullcote was applied to adhere the soot, also added some coal.

Here is the result of the front numbering project, spent an hour on this!


This shows a little of the profile on the headlamp This is the front on view getting these somewhat centered was the challenge. Everytime I went to adjust it would not stay exactly and sometimes another one would move a tad, finally I just said that will have to work.

Next I will add some soot, do the dullcoat, then the windows will go in

Well I finished up my 4-4-0 tonight. Fashioned some windows like the original was the last step prior to assemblage:

Here is the prototype: 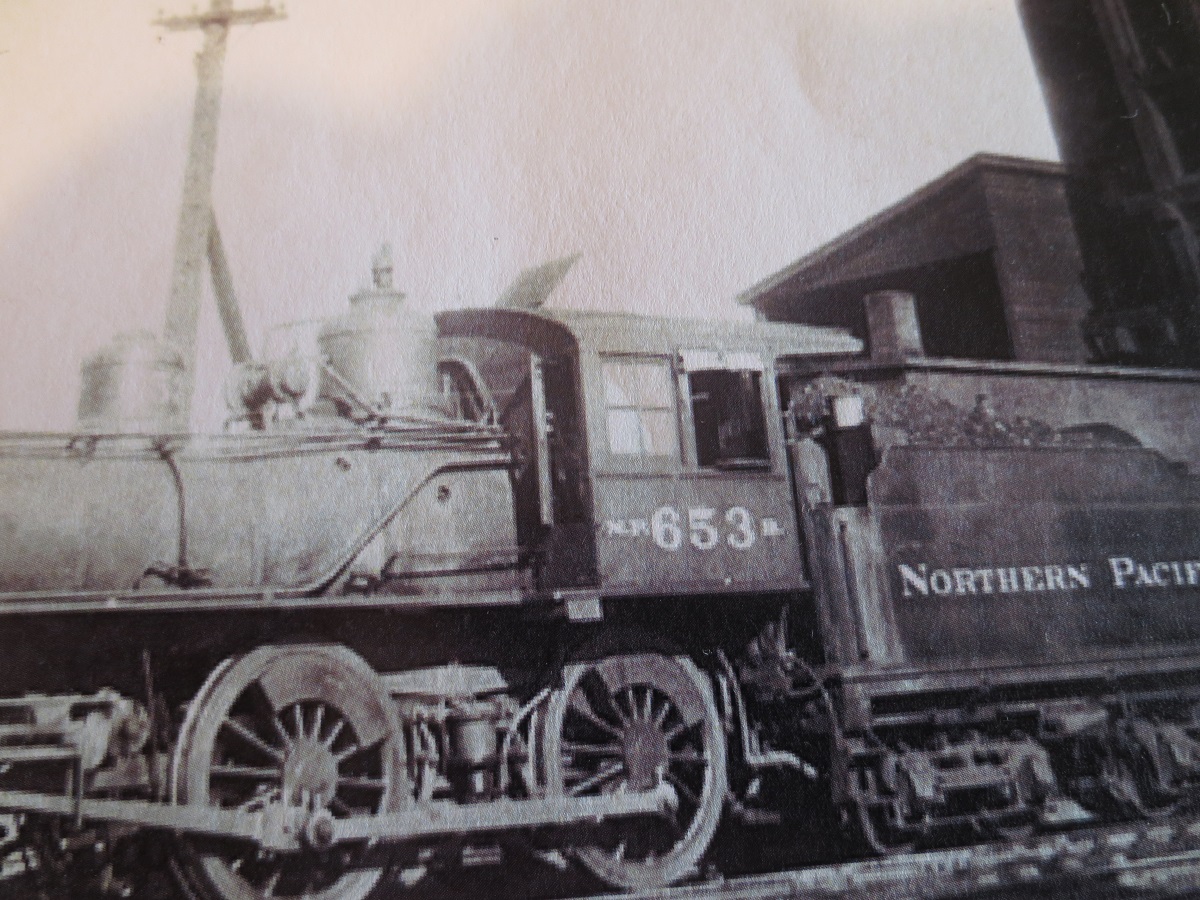 I cut out the plastic then narrow strips of paper, used black marker to get the munts: I trimmed the munts with a small scissors. They are glued on with the testors product shown below: Here is the arrangement forgetting them placed, the magnifying glass, tweezers, glue, toothpicks 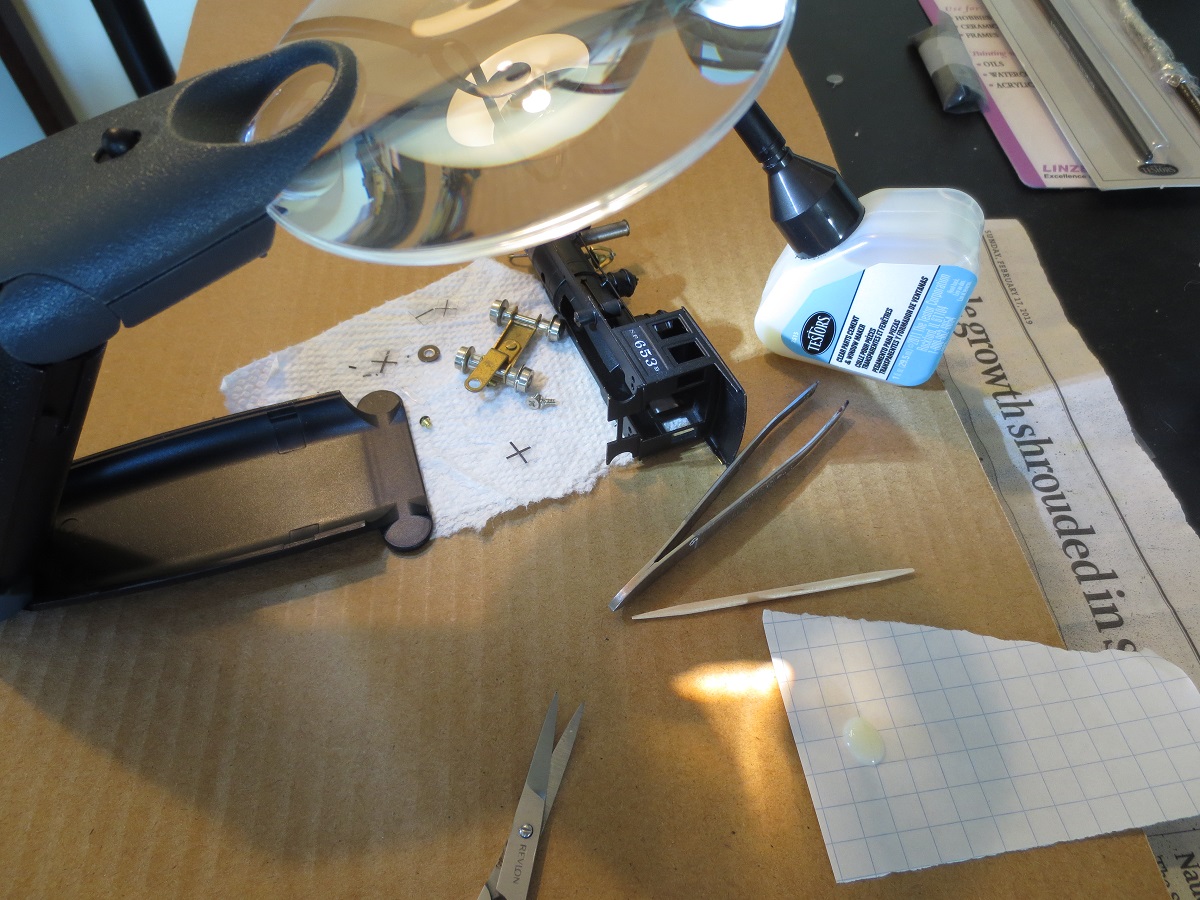 Here are a couple shots of my finished product:

My current layout amounts to no more than side by side 36" tracks on a pine 2 x 4:

(I hope the bear doesn't steal the show) 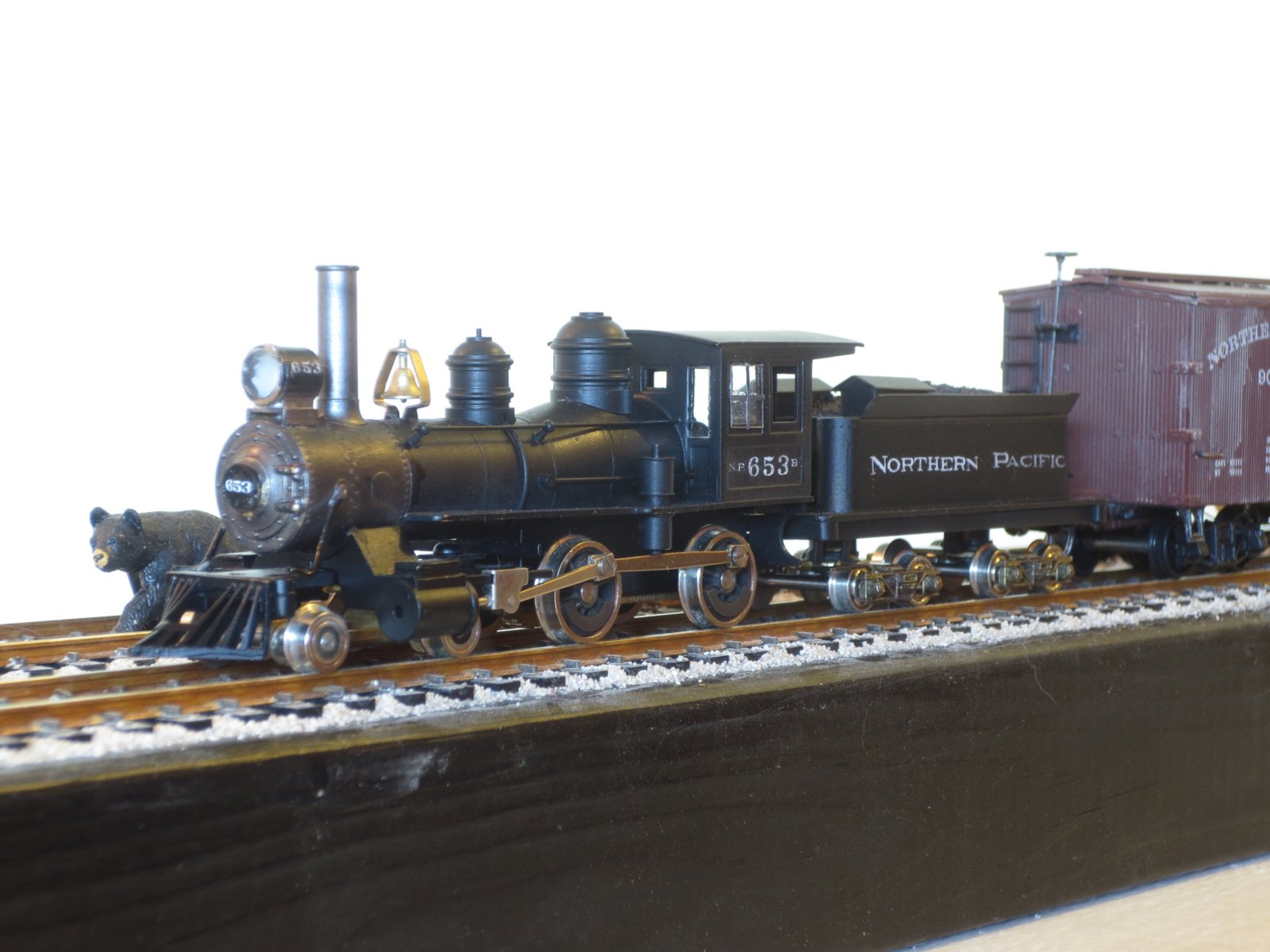 My next project will be one more Roundhouse box car followed by the AMB caboose kit.

Thanks for looking!! Dave

Dave,
Very nice train! I was never into older steam, but you have me taking a closer look. Very good work on the build!
Jim

Hello, Decided to get down some ideas for the new track plan. Spent a couple hours on this yesterday and will share some of the thoughts here.

2. With this sketch, I can have two spurs go into the center of the room, one with a logging spur to Taylors Falls (out of Wyoming) and a second spur out of Gronigen to the sandstone quarry

Here is a beginning rough in: the blue is where the stairs comes in. The redline denotes 2' width for the track and scenery

I made some adjustments to the layout plan, the entire concept will be drawn out using Paint on my computer! There won't be any fancy layout software here, but with the space available I do not envision any difficulties fitting the desired elements in.

The minimum radius will be 30" for the spurs and 36" for the mainline. Above, you can see I added the Taylors Falls spur which will be scenery, trestle, and a logging camp: however it will dead end in the woods and not go all the way to Taylors Falls. 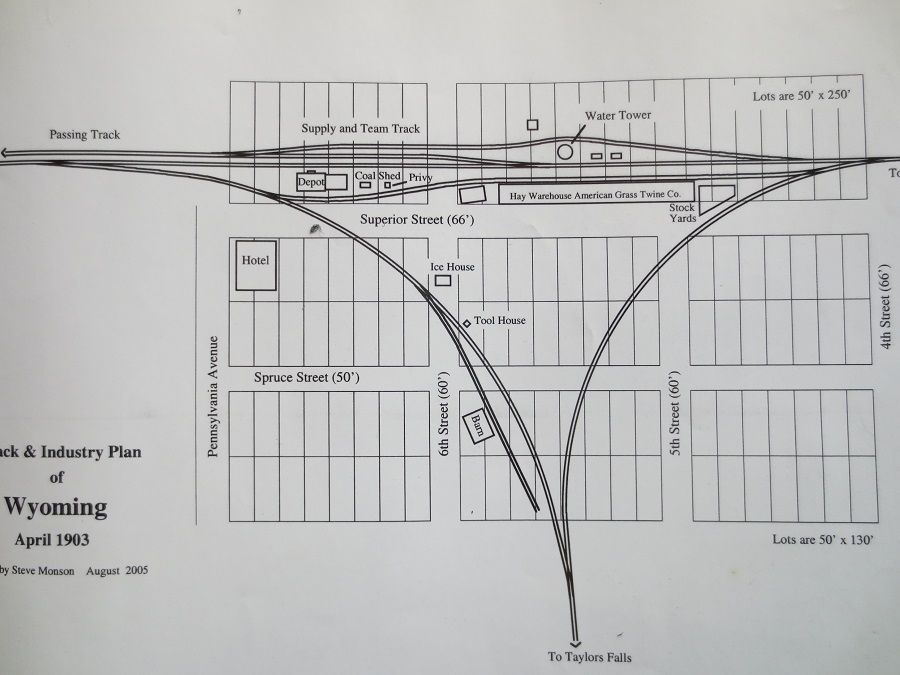 For your convenience, here are the photos of Groningen; the top one is 1939 aerial photography with the tracks marked out in red, and the bottom one is circa 1900 viewing North: The aerial photo isn't the greatest quality but you can make out the roads, building (generally by their shadows), and fields 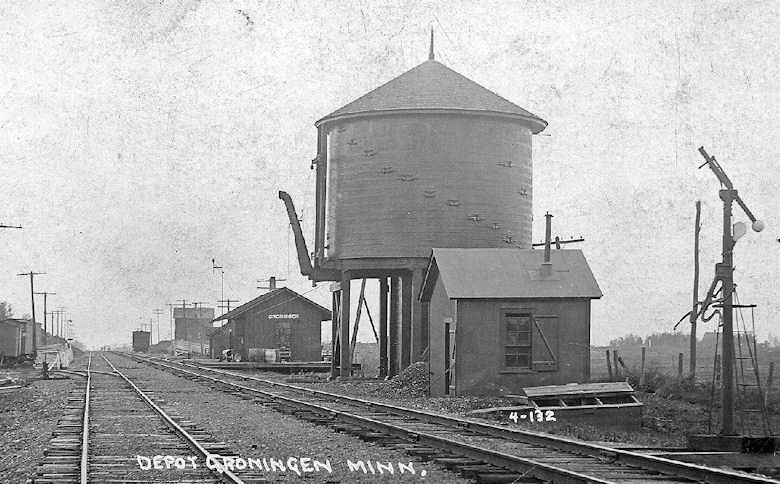 Dave - I like everything your doing. I always liked wyes. The logging camp and quarry are nice as I have been in many over the years. Looking forward to seeing your progress!
Y