Quite a number of industries/structures have been considered for this corner piece of real estate. 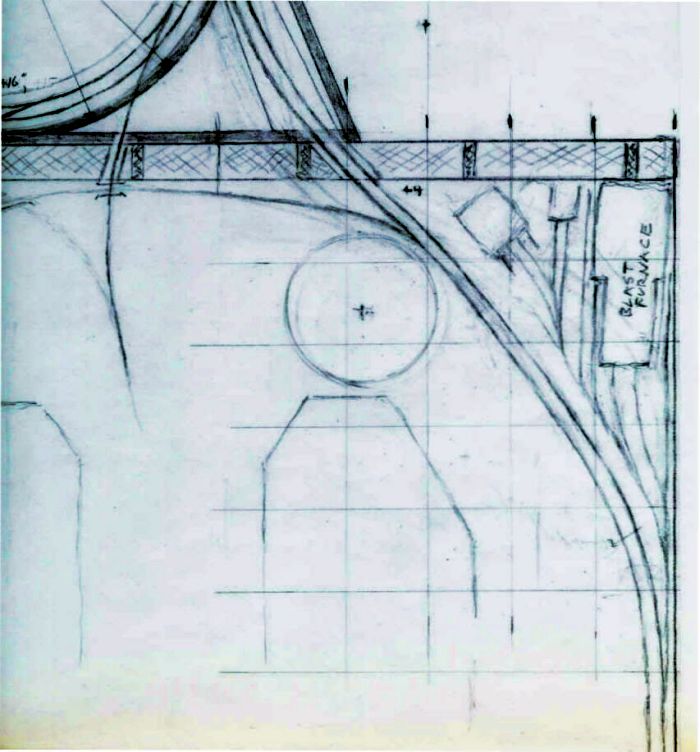 Most recently I had moved 'Allied Rail Rebuilders' out of that very corner, and out to an open field in front of the bridge portion of the stone arch viaduct.


My intention was to pursue placing a power plant scene in that corner location, building flat of that power plant against the backdrop , image of big coal pile on the backdrop, then electrical distribution structure out in front of the plant. (and maybe 3 smoke stacks).


Oops, .....this morning I unpacked and was taking photos of the coke structures that were part of that steel mill scene I bought a few years ago. I figured I might as well sell this structure off as there is no way I would have room for it down near my steel mill. I had never really looked at one of these coke plants that closely, nor considered utilizing one on my layout.


BUT I got to thinking, that being another coal consumer, would this structure fit into that corner along with the coal fired power plant?....just maybe? It is a pretty interesting structure that could stand on its own rather than being directly attached to the steel mill.

I'm liking it,...even while I will be accused of 'too much' in a small space

Awhile back I got this suggestion given to me about a few of my errors.


Have a look at the next 2 photos 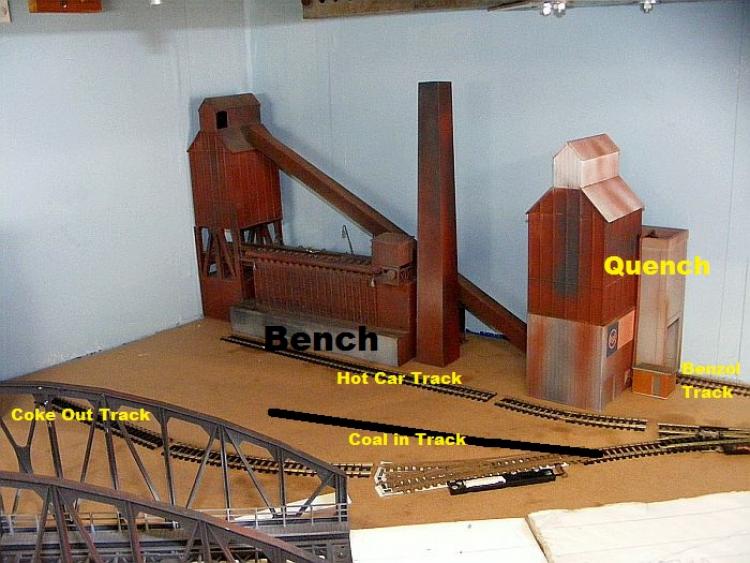 The next photo show the location of some of the new structure that would tie it all together. 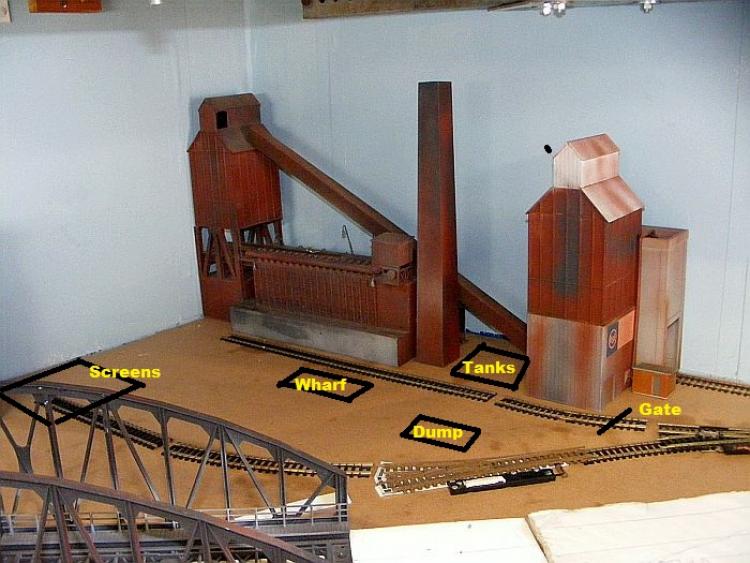 That ought to do to get your thinking started,
Regards,
John Garaty
Click to expand...

I was glad to get this knowledgeable info from a fellow who actually worked at a coke plant.
B

if its got the coke collecting car (hotcar) and its tracks with the quencher chamber, then that is the "coke side" . If your model has the ram on it, then that's the "pusher side".


The big pipe with the yellow arrow is the gas off-take main This took the gas and other compounds liberated during the coking process off to the by-products plant for separation into gas, sulphate of ammonia, benzol, toluene, tar and other compounds. On all the batteries at Port Kembla, this gas main was on the coke side, but I can think of no real engineering reason why this should be so.


As far as light coming from the battery, on the coke side the only light would come from the oven that was in the process of being pushed. The door extractor machine that runs along the coke bench beside the hotcar track on the has 2 purposes. The first is to take out the coke side oven door prior to pushing and then to re-install the cokeside oven door after the oven is pushed. The second purpose is to insert the coke guide into the oven after the cokeside door is removed. The coke guide forms a hollow channel the height and width of the oven that carries the coke across into the hotcar while the oven is being pushed. The will be a continuous red/yellow glow from the oven that can be seen while the coke guide is in place or when the extractor moves clear of the oven after the push so any spillage can be cleared from the bench before the extractor moves back in to re-install the oven door.


The oven also has to be "taken off main" before the doors can be removed from either side for pushing. This involves "lifting the lid" and doing some other stuff on the vertical standpipe that feeds across to the gas off-take main (with the yellow arrow). While the oven is "off main", there is usually flame coming from the top of the standpipe. The oven "goes back on main" after both oven doors have been re-installed after the oven has been pushed and the oven has been charged and levelled.


Hotcars are usually restricted to each oven battery but they can be shared between batteries while the adjacent battery's hotcar is down for maintenance. This is not ideal because it slows down the pushing rate of both oven batteries. At Port Kembla we had 6 separate oven batteries all lined up on the one hotcar track. In the mid 1970's #2 Battery was dead, but the hotcar from #3 Battery ran through to either #1 or #4 battery. Another part of the trainee's duty was to be the "observer" when this happened.


Hotcars are very specialised pieces of equipment. The driving locomotive is electrically powered by live rails under the side of the coke bench. The actual catching wagon has an angled deck on it and is robust enough to take having several thousand gallons of water dropped on every 10 minutes or so when the coke is being quenched under the quenching tower. The hotcar does a simple yo-yo run - catch the oven as it is pushed in a nice even thickness layer/move to under the quencher tower/quench the coke/move to the coke wharf and drop the quenched coke onto the coke wharf/close the coke drop doors on the hot car wagon and move to where the Extractor is set up for the next push/repeat until the end of shift. It sounds easy, but it isn't.


If you have 2 rams in action on a battery the hot car becomes "the weakest link" in how quickly you can push ovens. This is another reason why the hotcar stays on its assigned battery. If there is only one ram operating on the pusher side (most usually) then the ram becomes the weakest link, which is why the ram driver is the top paid operator on the battery.


I hope that this helps you to make some sense out of what your Walthers kit represents.

So begins my attempt to correct my mistakes, while concurrently trying to keep the plan simple


I have moved my quenching structure out from the wall, and aligned it with the quenching car track. Now that new coke can be cooled off by quenching, and furthermore perhaps a few hours sitting on one of several spur tracks back there.

Now that track over near the wall can become my coal-in track? I would image that the conveyor that goes up to the coke plant's coal reserve could be picking that coal up from a grated area at the end of that spur (where that cardboard box is),...or perhaps it could be a covered drop off ? .....

That would give the coke plant its own supply of good quality coal, and alternately provide a holding track where quenched coke cars might rest for some period of time?

BTW I think I need to eventually get something like this for that side of the coke oven,..

How about if the drop off point for that coal-in was a vertical coal tower that accepts the coal cars, then delivers the coal to the coke terminal via a conveyor from the bottom of its coal bin (which is above the coal cars themselves).

I would have to provide an opening in that lower segment (silver portion) of that coal tower.
B


Okay as I looked thru a lot of those photos today I did see a lot of wharf locations right off that hot track. So now I propose to put a wharf right along the coke collection track (the white slab in these photos). And I will add a new track down to that wharf to pick up the cooled off coke. Don't know that I will detail that loading procedure yet.