Finished the track plans, and the base plate onto which the coal mine will be built. Now I need to turn my attention to the left and down that long ramp that will take the trains down along that side of the layout to connect back to the mainline. At the bottom of that ramp there will be an intersection of turnouts that will allow the trains to access the refinery area. The refinery area is going to fill that opposite corner, and include both oil products and propane products,....so oil and propane tank cars will be loading and moving around on these tracks on either side of the refinery.


Early on I had wanted to possible find a location for at least a small cryogenic plant along with a spherical storage tank for those liquefied gases. It stems from my long time fascination with those cryogenic tank cars. I bought at least 8 of them when BLI finally bought out those plastic ones. Up to that time I figured the only way I would be able to afford those brass cars was to kit bash them like Bobby Pitts did such an excellent job on. 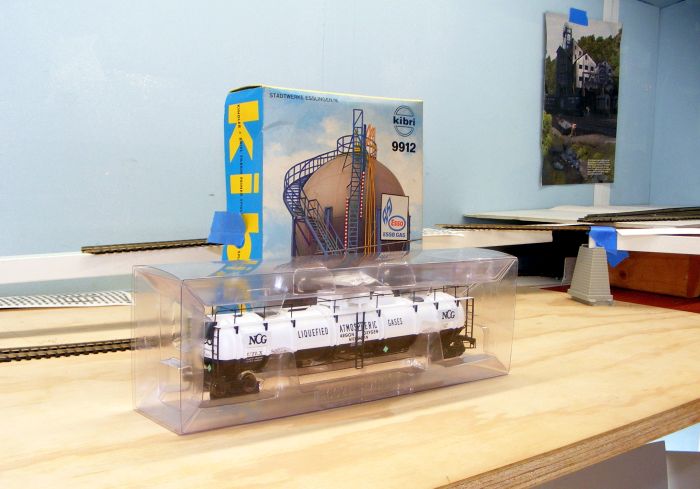 Lets see, can I fit something in that space between to two opposite ends of the layout, and outboard of that ramp of track? First off I needed a long track parallel to the ramp track that could allow for staging some of those tank cars that would be coming and going from the refinery. Perhaps I should have two such 'staging tracks' for the variety of tank cars involved, plus even some coal loaded cars might pay a visit.


By happenstance I placed some turnouts and spur tracks at angles off of one of those staging tracks. Here is what that looked like. 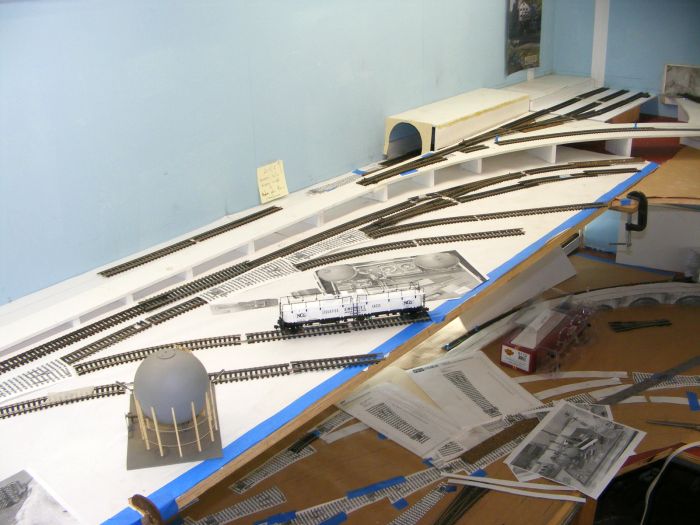 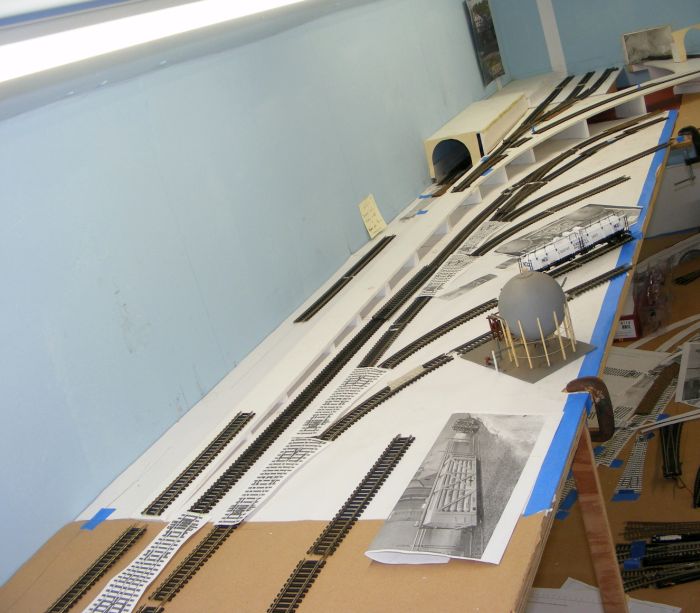 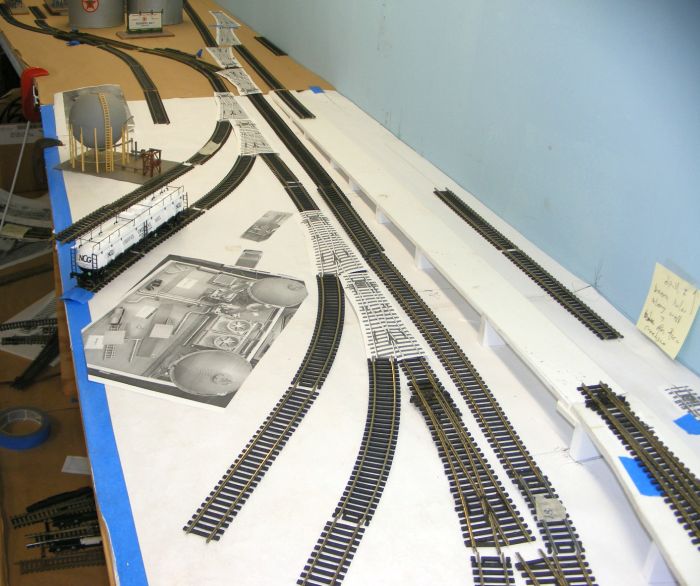 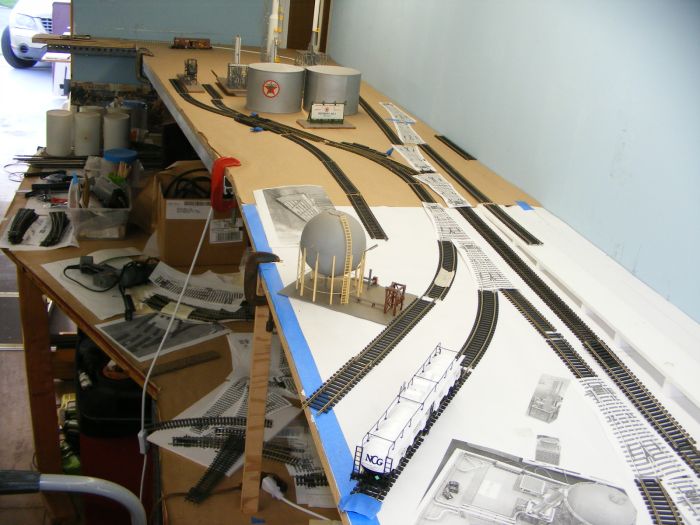 I randomly placed those spurs in 'pairs' thinking each pair could service a small plant each. And the spurs are long enough to accommodate two of those cryogenic cars. The small plants would be located in between those spurs, and might consist of spherical stowage tanks (have two already), short squat condensing towers, taller towers, etc.

Nothing set in stone,..just brainstorming.

I'm trying to figure out what might be done to 'disguise' that ramp of track running down that side behind the cryogenic plants. The ramp can be seen rather clearly in a few of those pics.

I did NOT want to make it some sort of man-made steel structure, but rather an 'earthly' structure. But it is pretty tightly sandwiched in between that mainline track running along the wall, and the siding/staging tracks for the refinery et al. That would make the sides of that ramp-roadbed/mound pretty steep?

Just be sure to solidly attach the helium storage tank to your layout before you fill it. The prototype is bigger and made of steel. Your model is made of plastic and could float away.

But to answer your question, could steel panels driven into the ground (close to the track) work? Think cofferdam.

I think I have that helium kit as well. Interesting to see how you place it.
B

I have had some interest expressed in my Helium operations. So I thought I would share a snap of my Helium reduction refinery and much modified old AHM Helium car. For those who are in the Santa Fe Railway Historical group may have seen my article on modeling the AHM cars in the 4th Q 2014 issue of the WARBONNET.

The refinery is pure imagination but is based on the "feeling" of the Excel Helium plant at Keyes, Oklahoma.
Pat 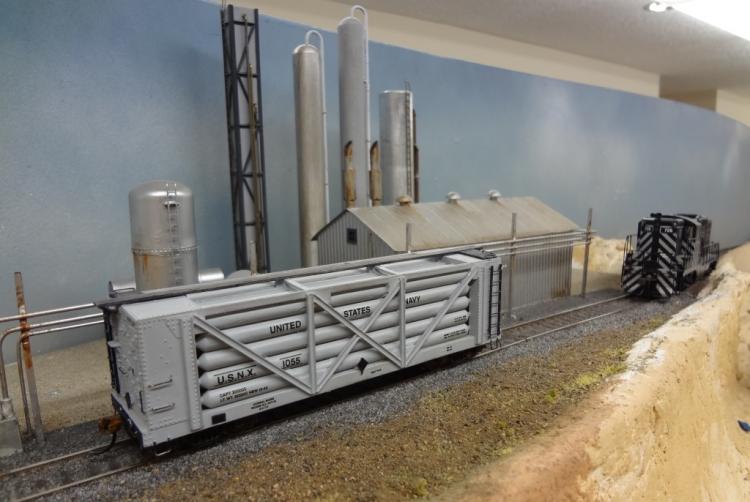 Those helium cars look pretty good, but I almost wonder why none of the modern manufacturers have not chosen to make a new model of these cars?
B

Creating Molds & Helium Car
Any more updates on this thought? Sounds like an interesting method to produce just hundreds of items vs thousands?

Fri, 2018-03-02 17:58 — krjone01
Formlabs has a white paper on using their SLA resin printer to create injection molds. The molds don't last as long as a steel mold, but you can always print another.
https://formlabs.com/blog/3d-printing-for-injection-molding/
Kevin Jones
Click to expand...