There is also word that yet another locomotive has arrived a week ago. A "Cotton Belt" unit.....bought on a burn sale. GP-40 Cotton Belt SSW SP it is currently in the shop getting programed. Also on the horizon a new box car to pay homage to the boss's home town where he was born is on the way. Then there is a beast of a machine coming as well, One of the first SD90MACs 6,000 hp loco.....we already have one in our fleet and decided on another. We here at JR's UPRR are able to resolve the problems of the 6k units and have it purring like a kitten and performing well. This unit is coming soon.

During 1995 to 1998, UP completed a series of tests and operations using four tenders for diesel fuel. There were four diesel fuel tenders.

October 4, 1996
"Omaha-Council Bluffs area employees are invited to view one of UP's new fuel tenders on Friday, October 4. The UPT-7 tender will be on display from 7 a.m. to dark on the intermodal yard track south of the Harriman Dispatching Center parking lot as part of the HDC Fuel Days celebration. The company now has four fuel tenders in service across the system. By carrying an additional supply of fuel, the tenders are reducing locomotive dwell time, extending the distance trains can travel and enabling the company to fuel more price competitively. The four UP tenders are numbered UPT-5 through UPT-8." (Update Line, Union Pacific Communications Department, October 3, 1996)

UP had four tank cars converted to serve as diesel fuel tenders 1995. The cars were numbered as UPT 5 to UPT 8, numbered following the four LNG tenders (UPT 1 to UPT 4). The diesel fuel tender program was initiated in late 1995, placing a single fuel tender between two new General Electric C44ACs. The combination of a fuel tender connected between two locomotives was usually assigned to unit coal trains coming out of the Powder River Basin in Wyoming. The fuel tender program came to an end due to wear and tear on the fuel tenders themselves, since tank car frames are not designed to take the buffeting and differing longitudinal loads that locomotives are designed for. The tank cars used were standard tank cars, which are also not designed to take the high mileage of being coupled between locomotives (approximately 90,000 miles per year, about four times what a standard tank car would see). The program was in operation during from approximately July 1996 through May 1998 (date range supported by dated photos of fuel tenders in service). All of the fuel tenders were out of service by April 2000, and stored at Council Bluffs at UP's Fox Park passenger facility. They were still there as late as June 2002. (part from Trainorders.com, January 26, 2006; See also: an article by Michael McGowen in "Union Pacific Modeler", Volume 3, pages 84-91)

The tenders were tested beginning in May 1996. They were converted from four Class O-70-1 tank cars from the 70000-70199 number series. The fuel tenders were numbered UPT 5 through UPT 8. The tank cars were originally built in the 1954-55 timeframe by American Car & Foundry. The cars were modified by Union Tank Car in Muscatine, Iowa. The cars were 51 feet long and had a capacity of 19,167 gallons. ("Fuel Tenders; UP's Answer To Better Delivery Times", The Streamliner [UPHS], Volume 13, Number 2, Spring 1999; article includes several photos and drawings)

Tough call, they're both beautiful.

OBTC 1909 said:
Tough call, they're both beautiful.
Click to expand...

I agree....I just had to have the unusual ES44AC I understand that it never existed but I will be getting a Union Pacific livery one very soon....

Alcomotive said:
I agree....I just had to have the unusual ES44AC I understand that it never existed but I will be getting a Union Pacific livery one very soon....
Click to expand...

I'm one of those guys that doesn't really care if something existed. If it's plausible that it could have happened, that's good enough for me.

I think that the paint job and colour on the UP 1996 looks awesome !

What in tarnation is this?

The guys were surprised as what pulled out of the diesel shops. It was snucked in late last night... the boss wanted to trick their minds with this paint scheme. The guys know darn well this was never a scheme for this locomotive but the boss says we are paying homage to the DRG&W. So be it and eveyone agrees that it has a real cool factor! It will be a nice addition to JR's UPRR stables.

We bring you a GE Dash 9-44CW in a Rio Grande livery. So what ya'll think!

Staff member
Goodness - that is a lot of HP!

Well the hits keeps on coming and rolling in.....

This beast showed up and Wyatt is estatic about this one. UP #8039 SD90MAC 6000hp as it originally was intended for.... not the 4300hp She will be speed matched to the existing SD90 UP #8102 on the roster. They will be assigned together to tank hauling duties. She's got a nice sound WOW system installed and all the bells and whistles. May later convert to LEDs. JR's UPPR has been amassing some serious road power lately the deals keep on rolling in. Wait until you see what shows up next. The buzz and scuttle butt now is there are some serious iron coming on the high rail in the form of STEAM! JR's UPPR management decided to look at getting a few stars for the steam program to run some excursions. Stay tuned. Enjoy the pics of SD90MAC......

Management just got back from a trip to Birmingham, Alabama......

A slew of new motive power arrived in the yard.....all kinds of locomotive rumbling moving in on the rails.....new paint schemes for JR's UPPR Heritage Fleet in acknowledgement....or nod to the fallen flags. (although these are fantasy schemes and not prototypes...we are accepting them on JR's UPRR)

The boys got a call for (2) more locos coming into the yard! UP MOPAC Heritage unit #1982 SD70Ace and a new re-built switcher SW1500 UPY #1072. Both were great deals and much desired to have on the roster.

Wyatt sure liked the MOPAC unit..... 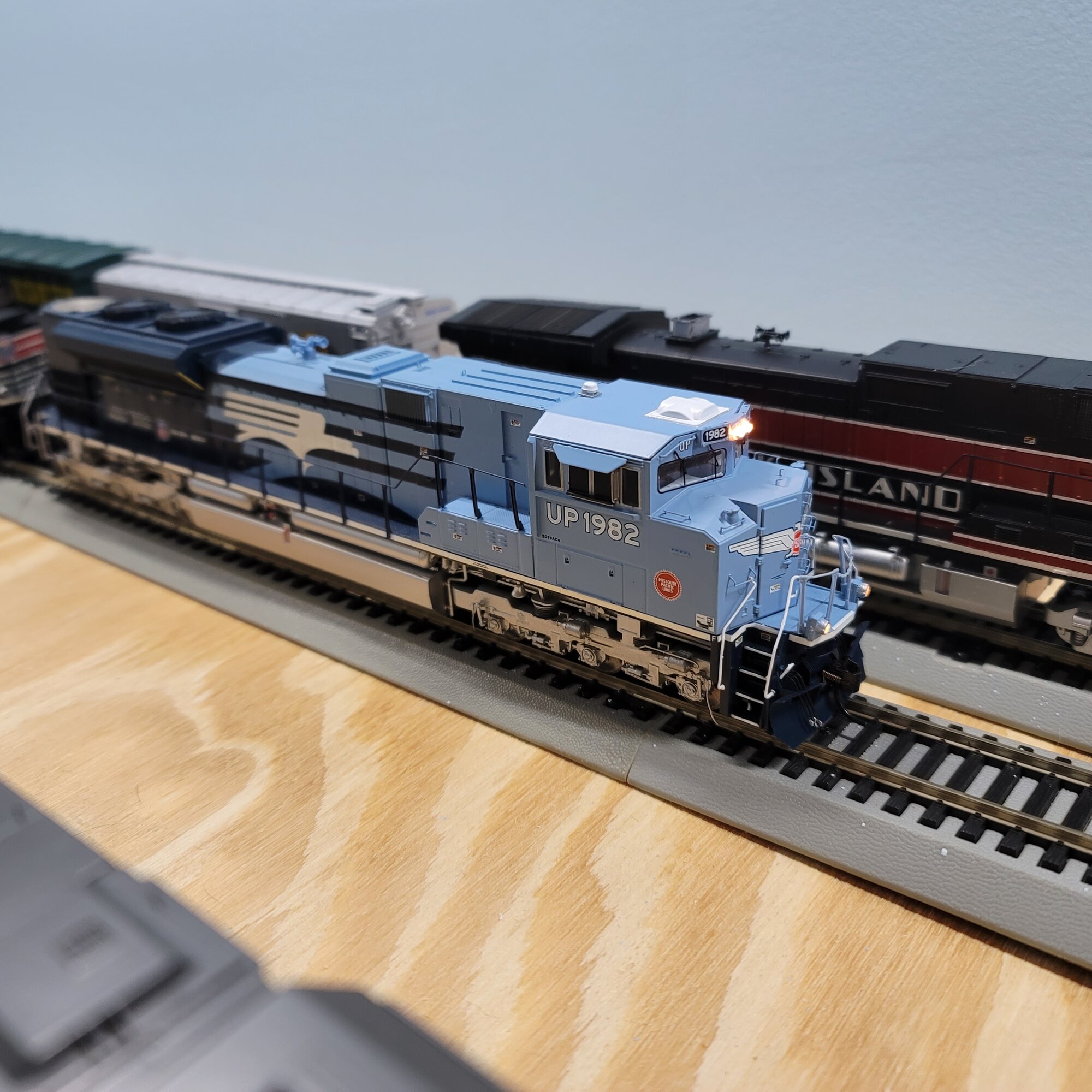 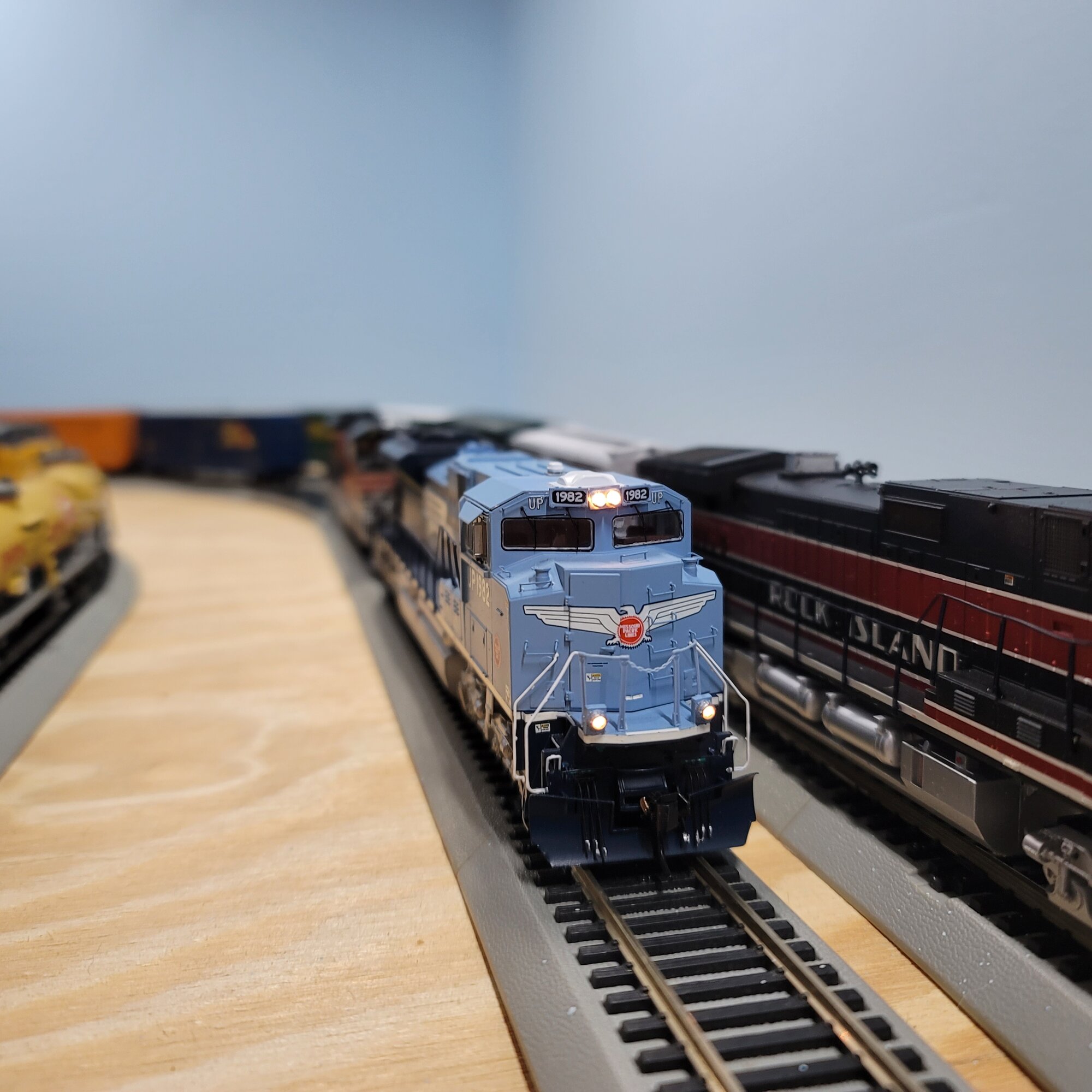 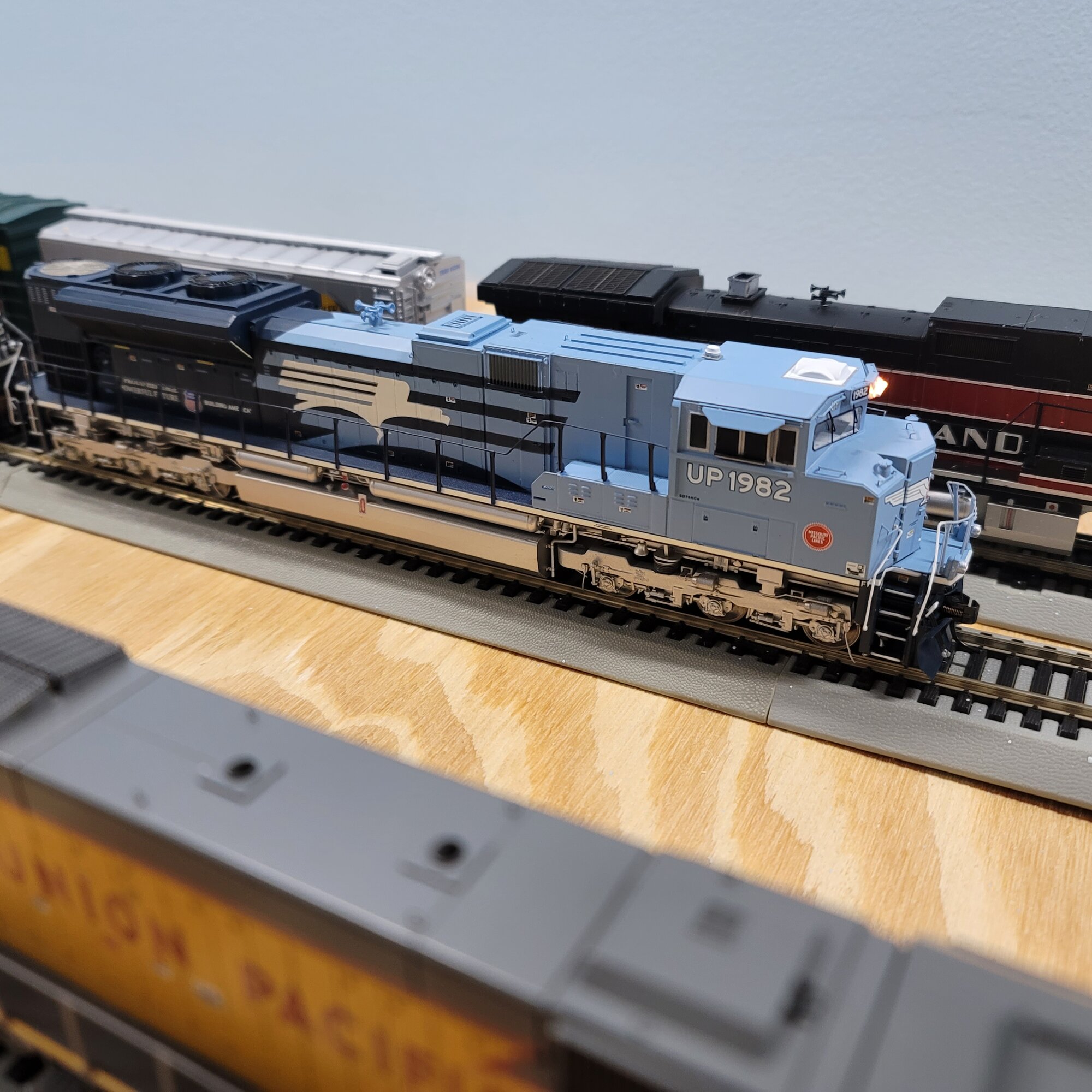 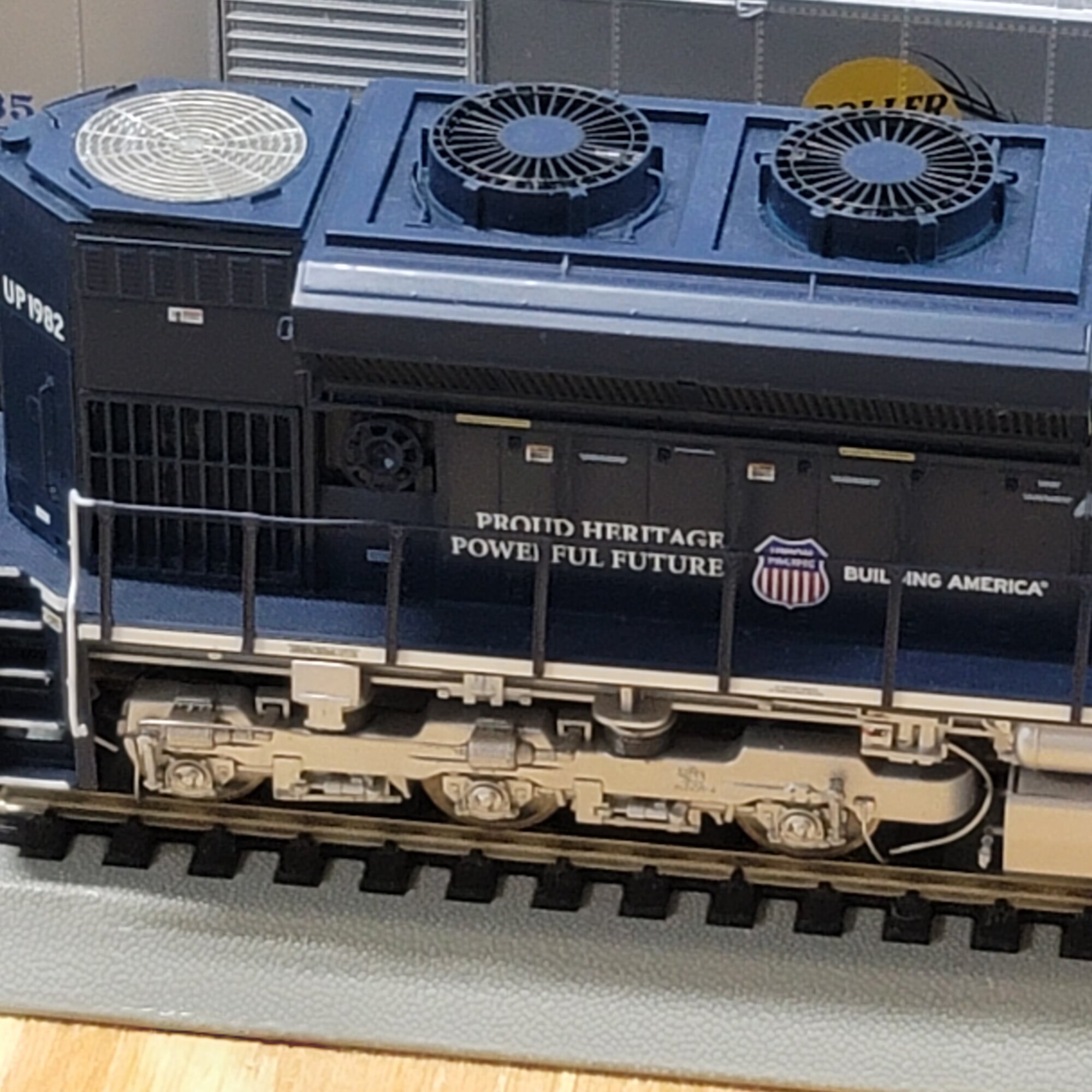 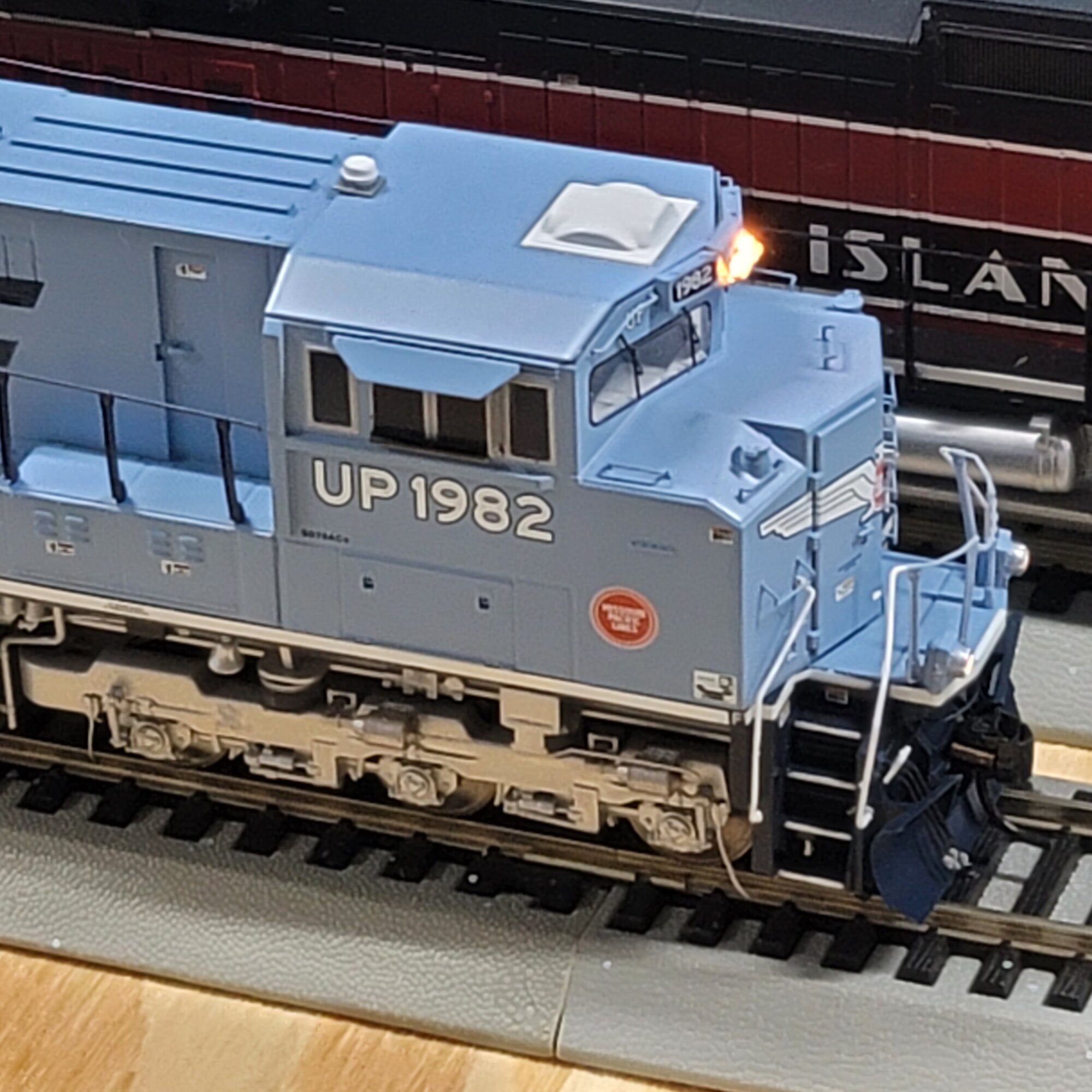 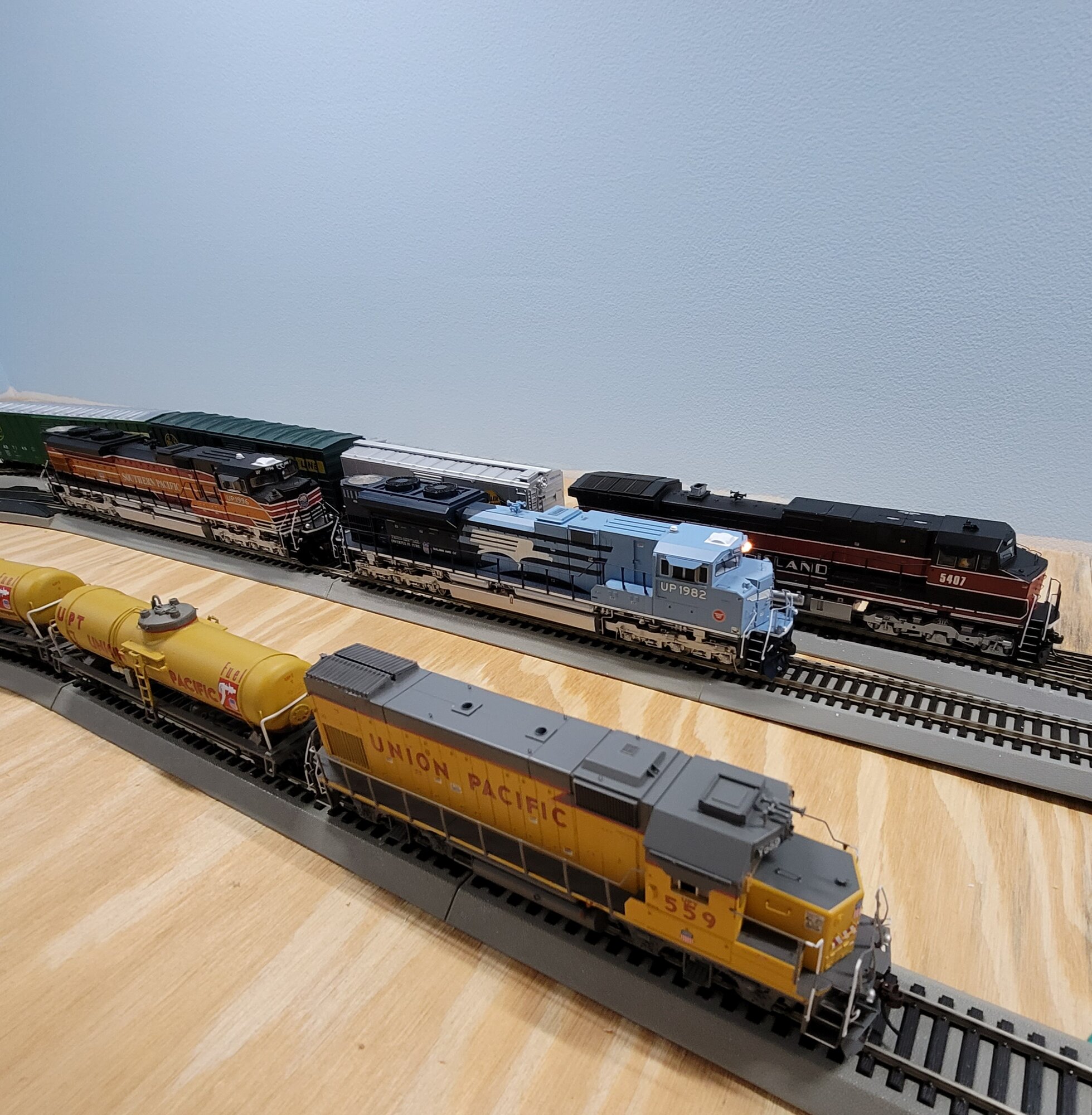 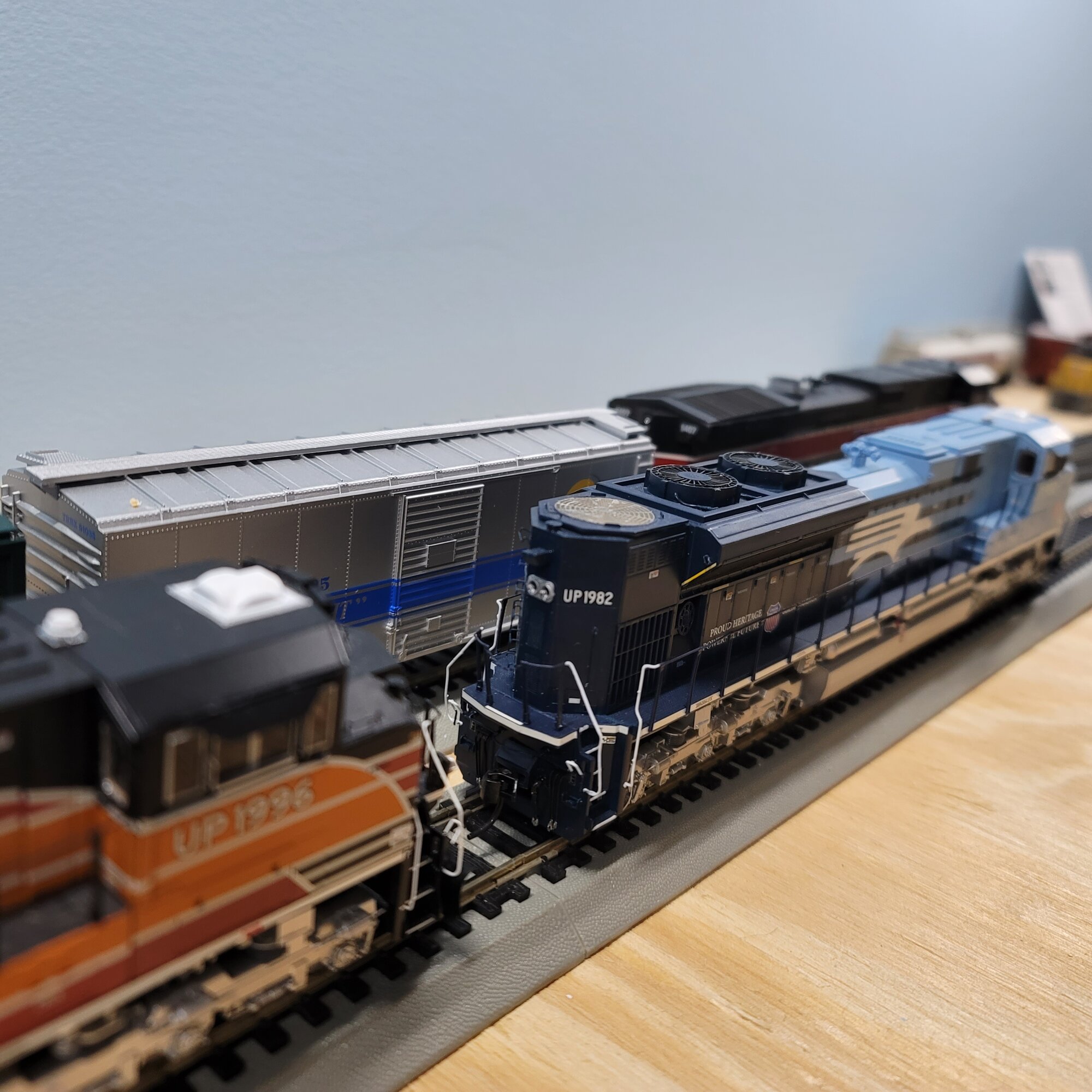 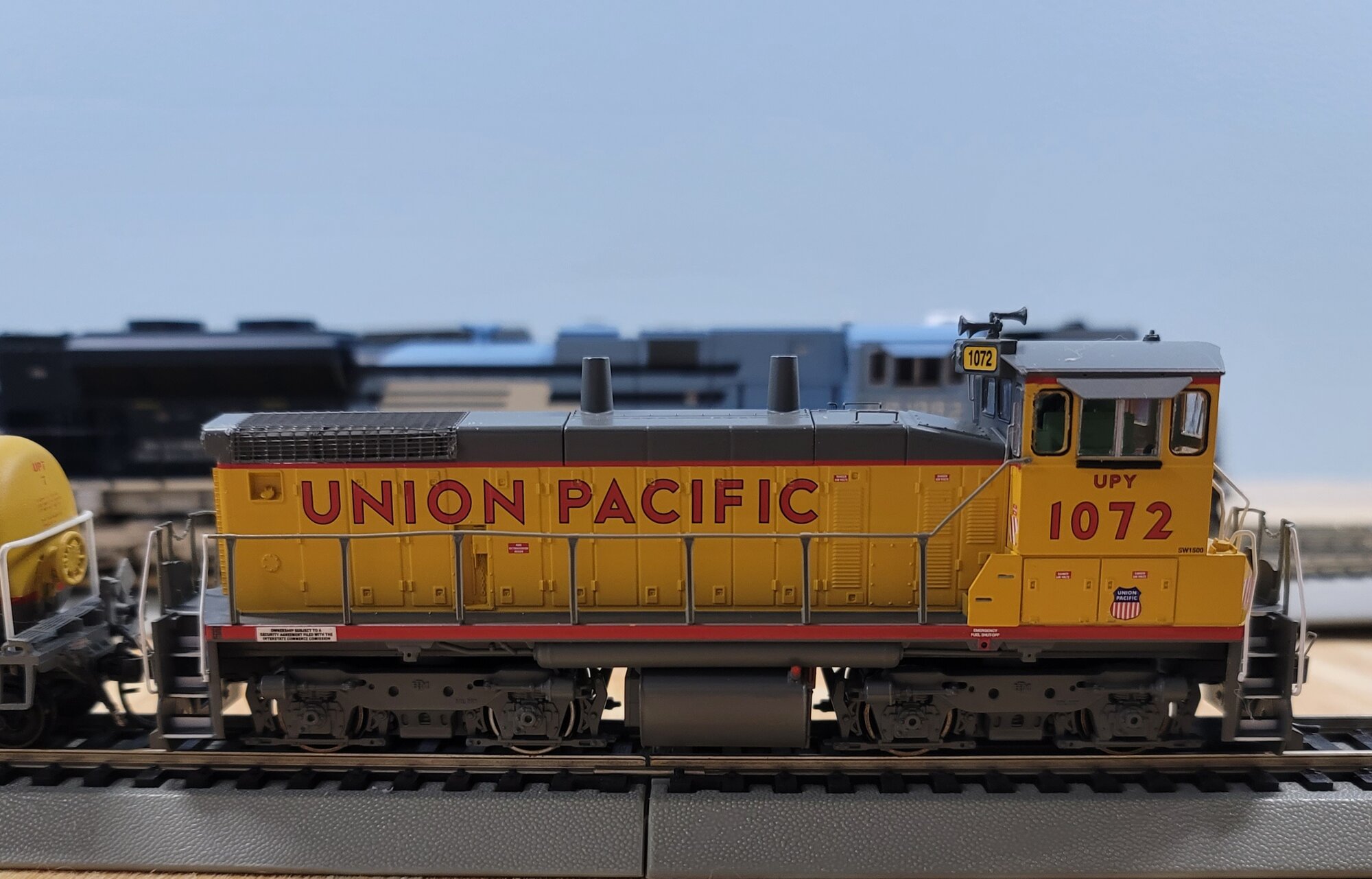 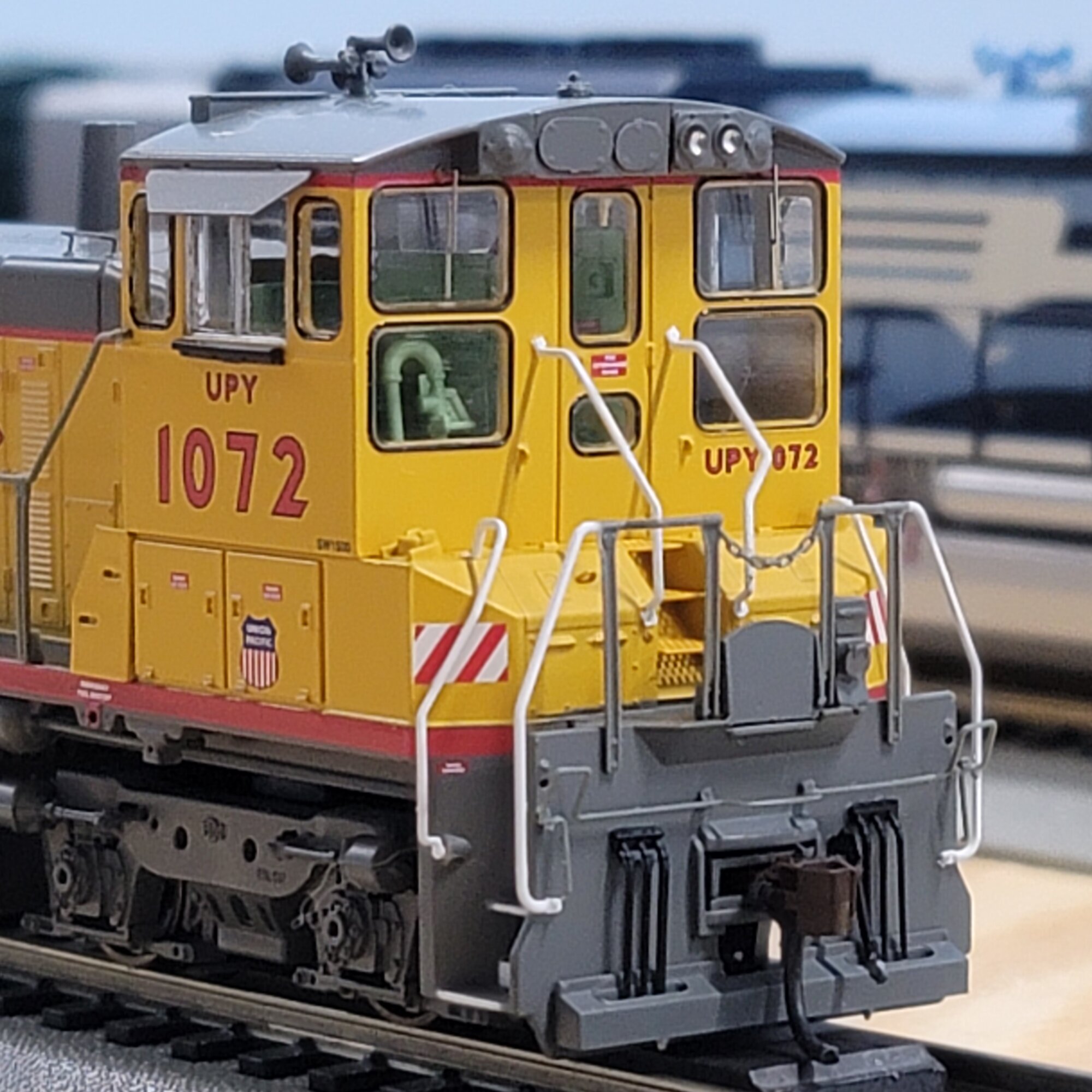 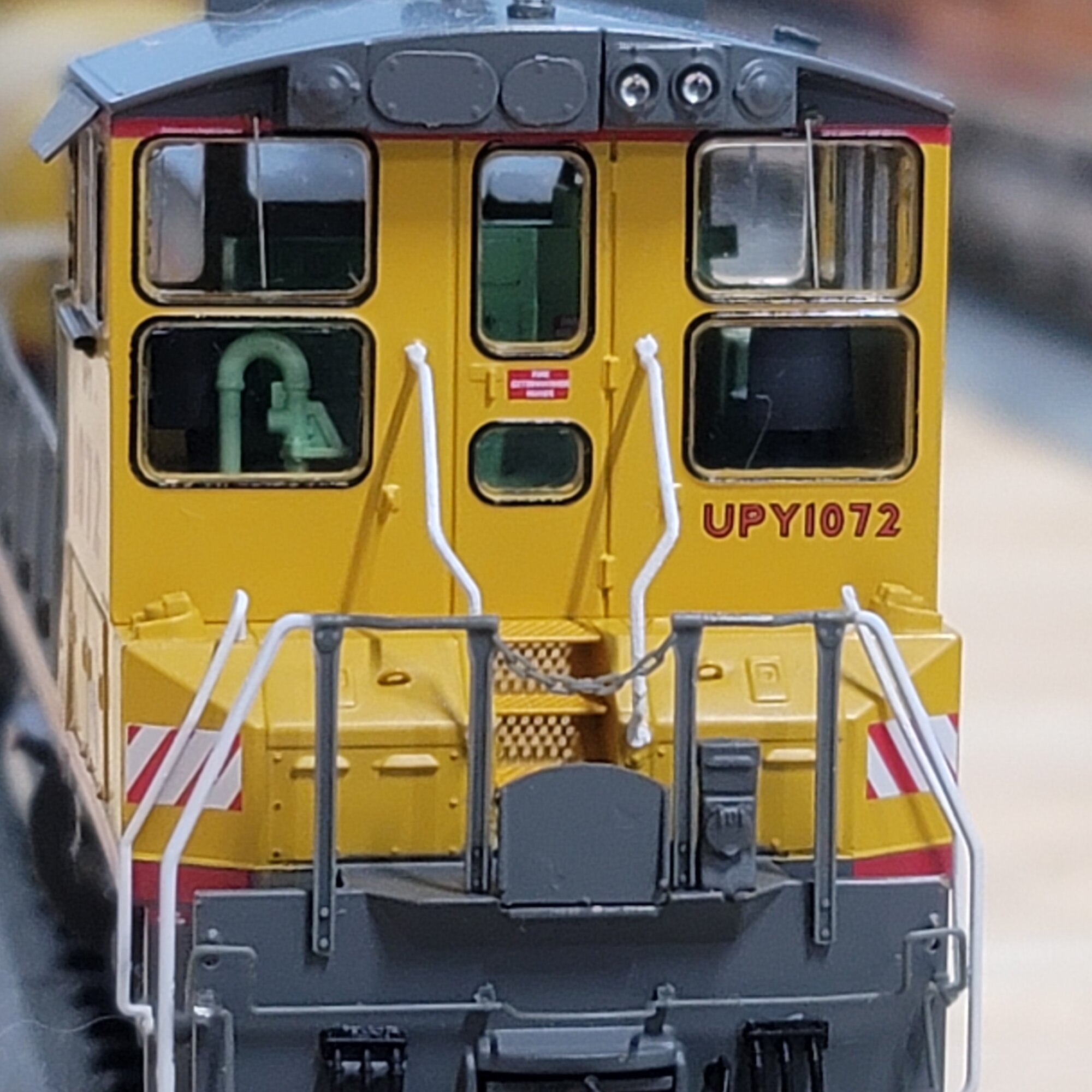 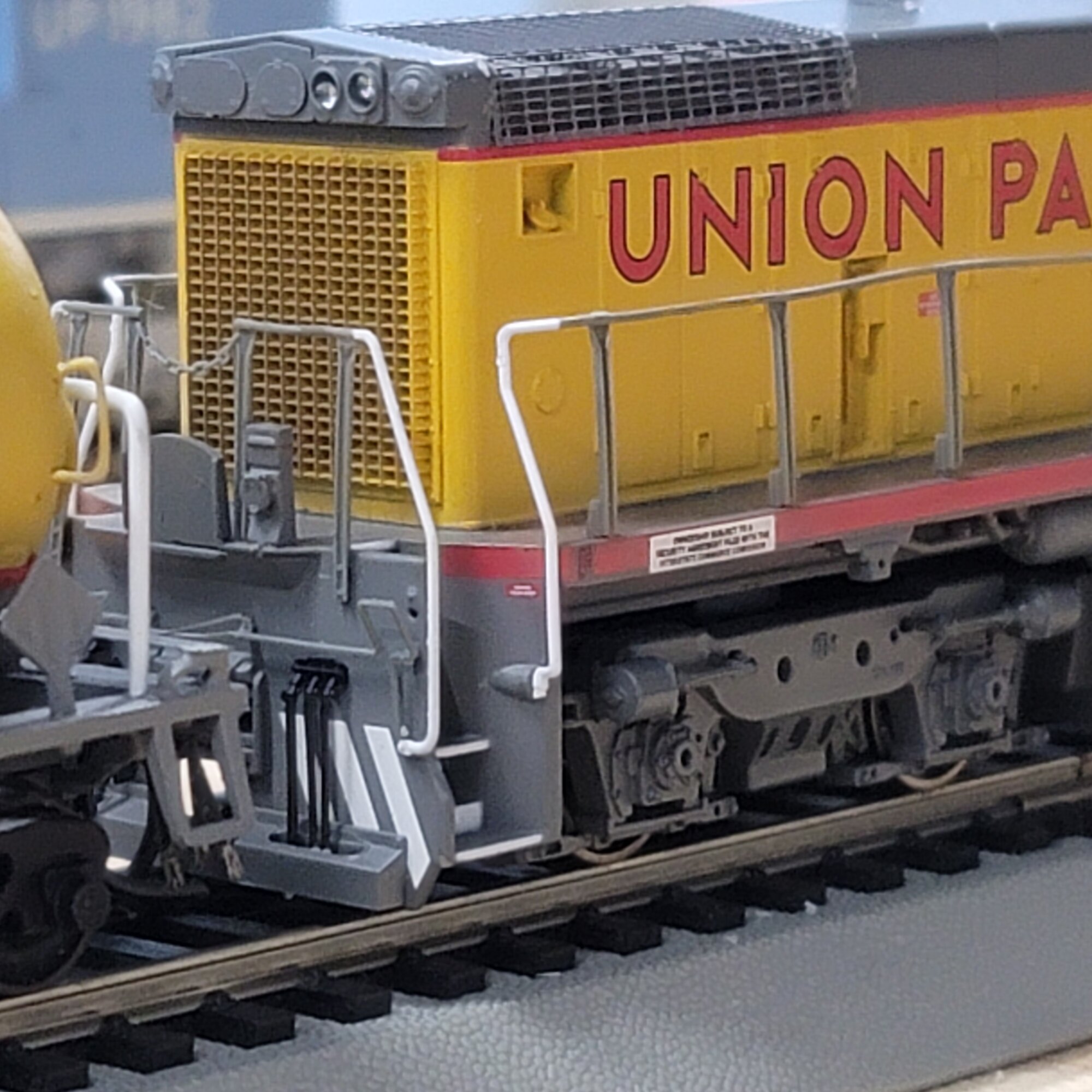 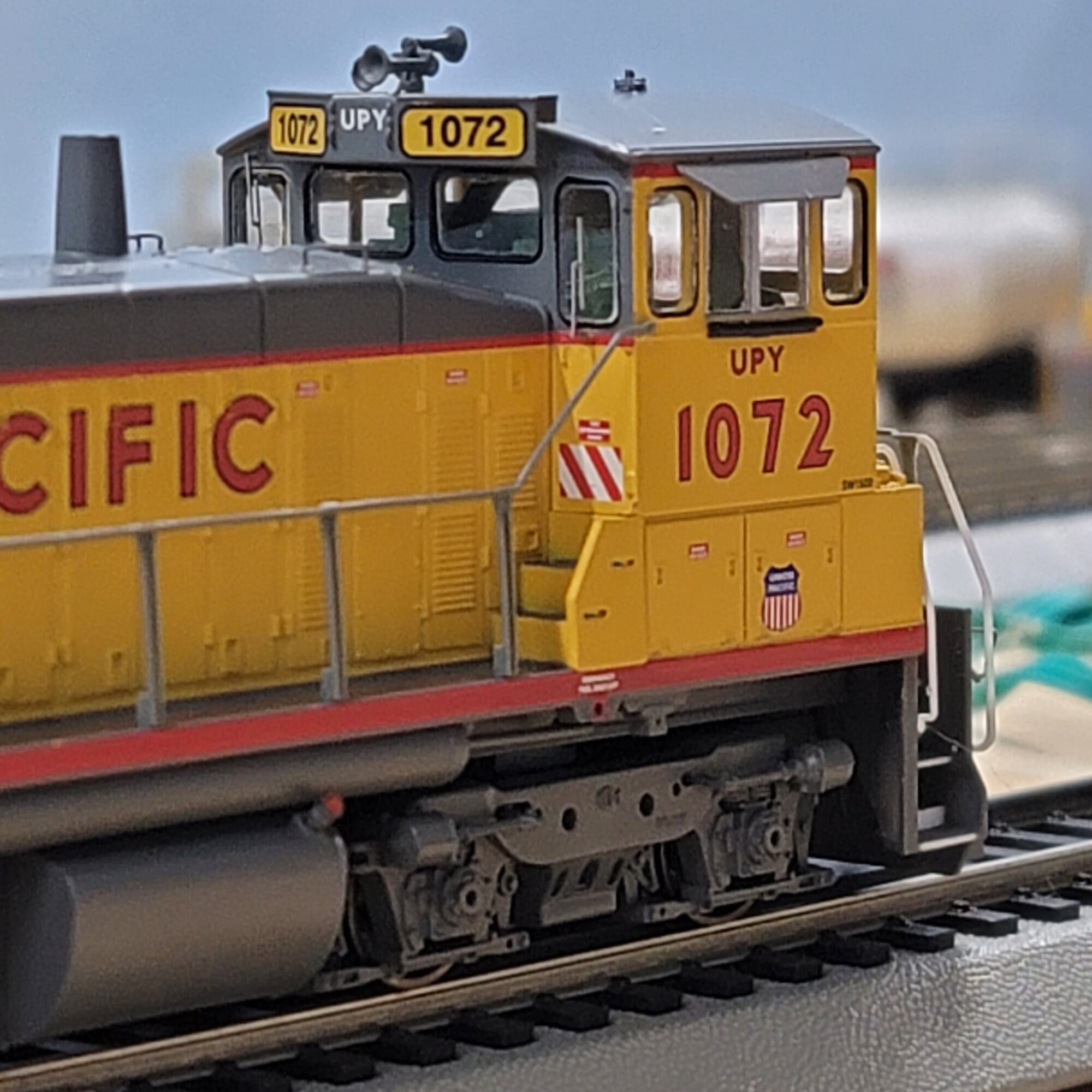 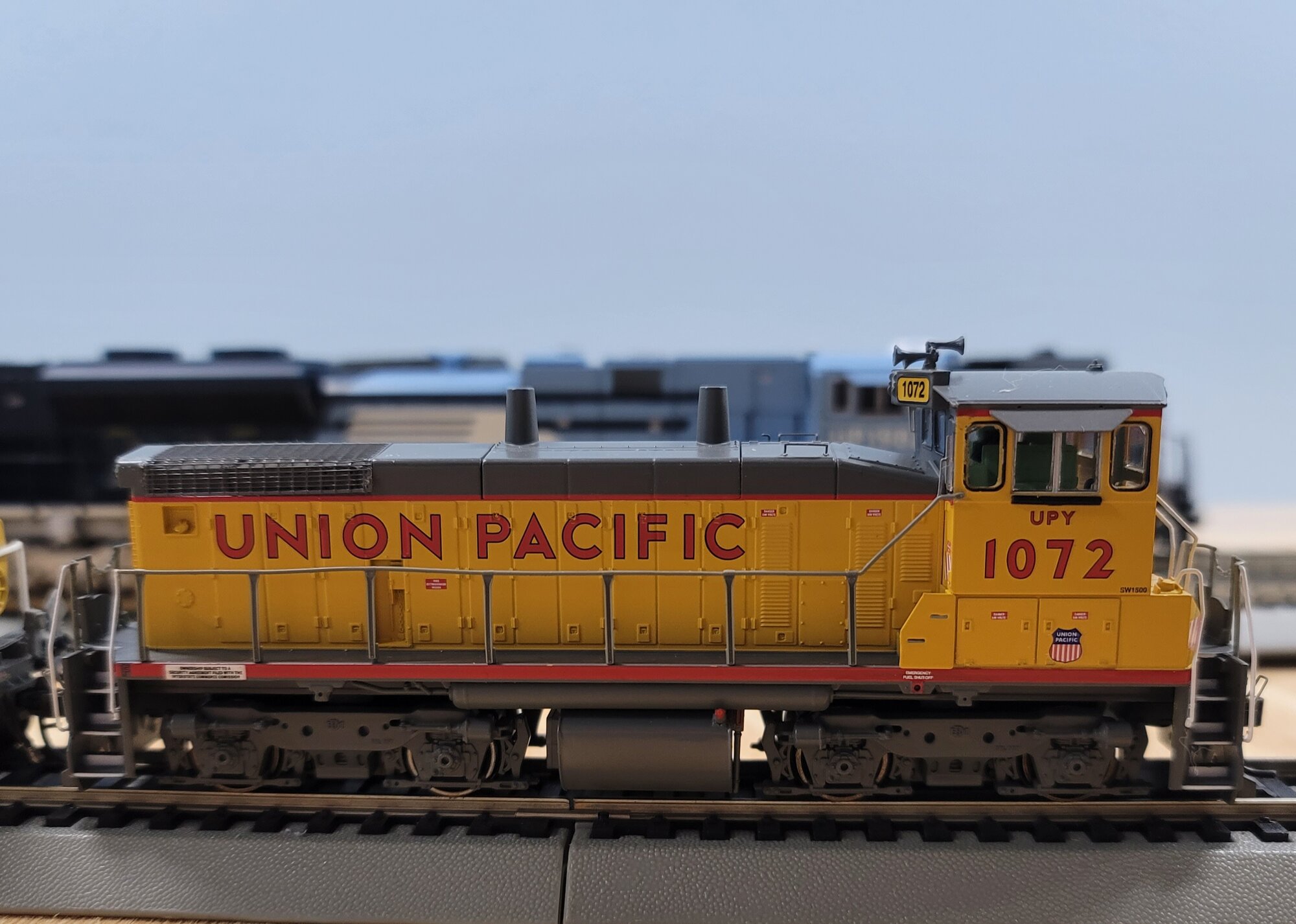 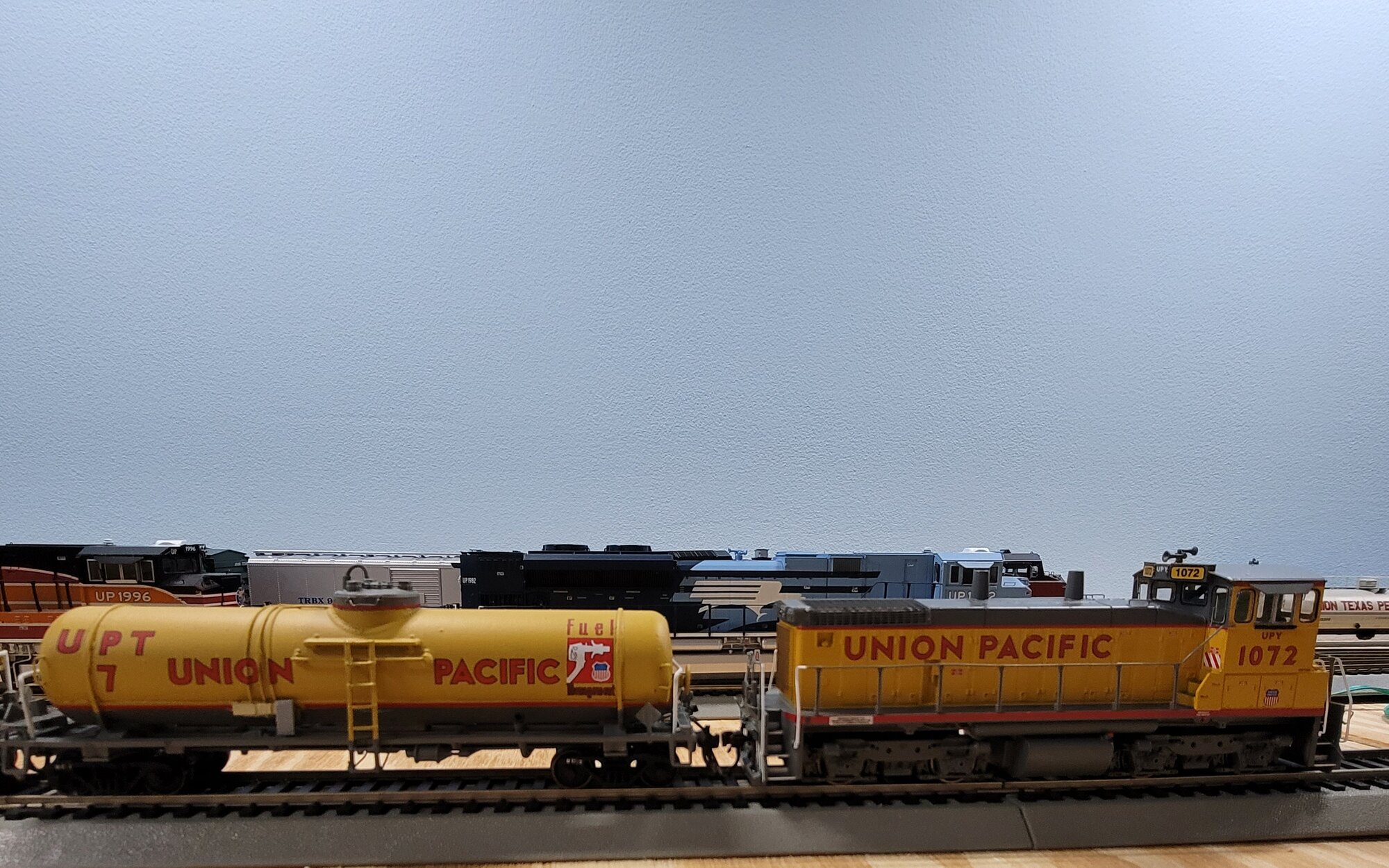 (I must say I am impressed with this RTR Athearn....got this for 75 bucks and I was surprised on the detail in the cab and such.)

The boy's are checking out a new visitor.....the locomotive is from the Boss's hometown.....this locomotive use to run the ski train from Saratoga Springs to North Creek up at Gore Mountain in upstate NY. We decided to acquire as it is in mint condition. Will need to add LED ditch lights to match prototype. Also need to install the window visors which came in the box. 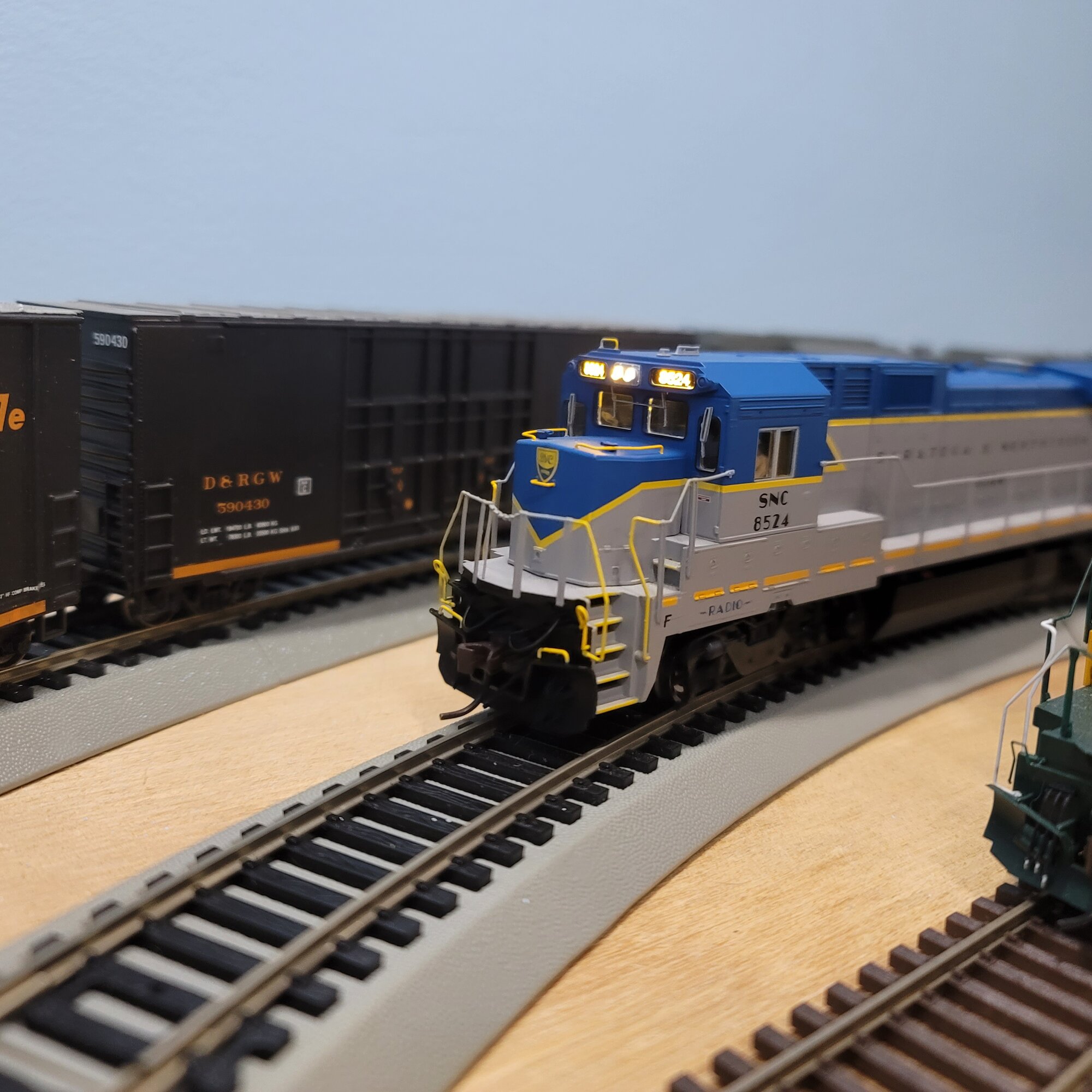 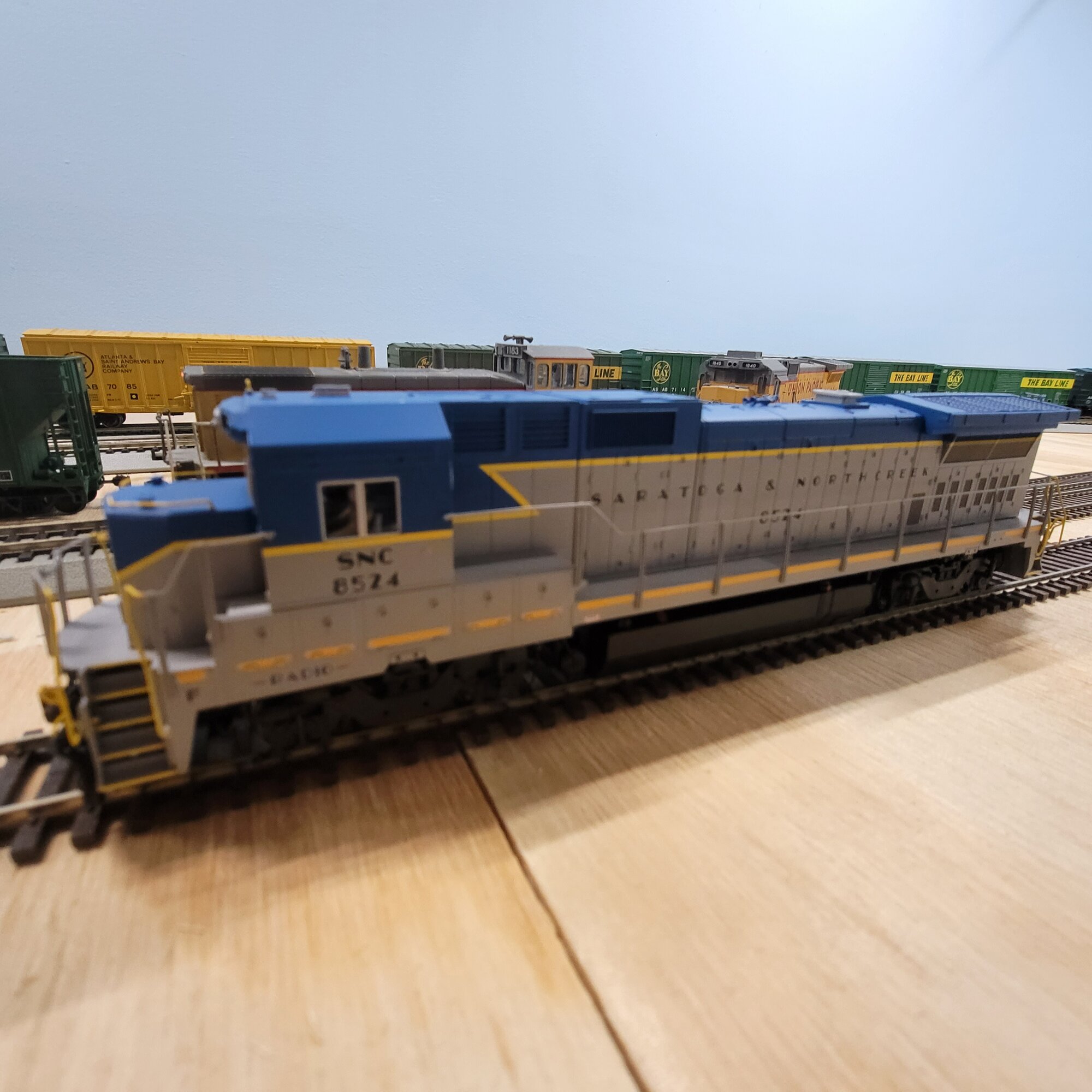 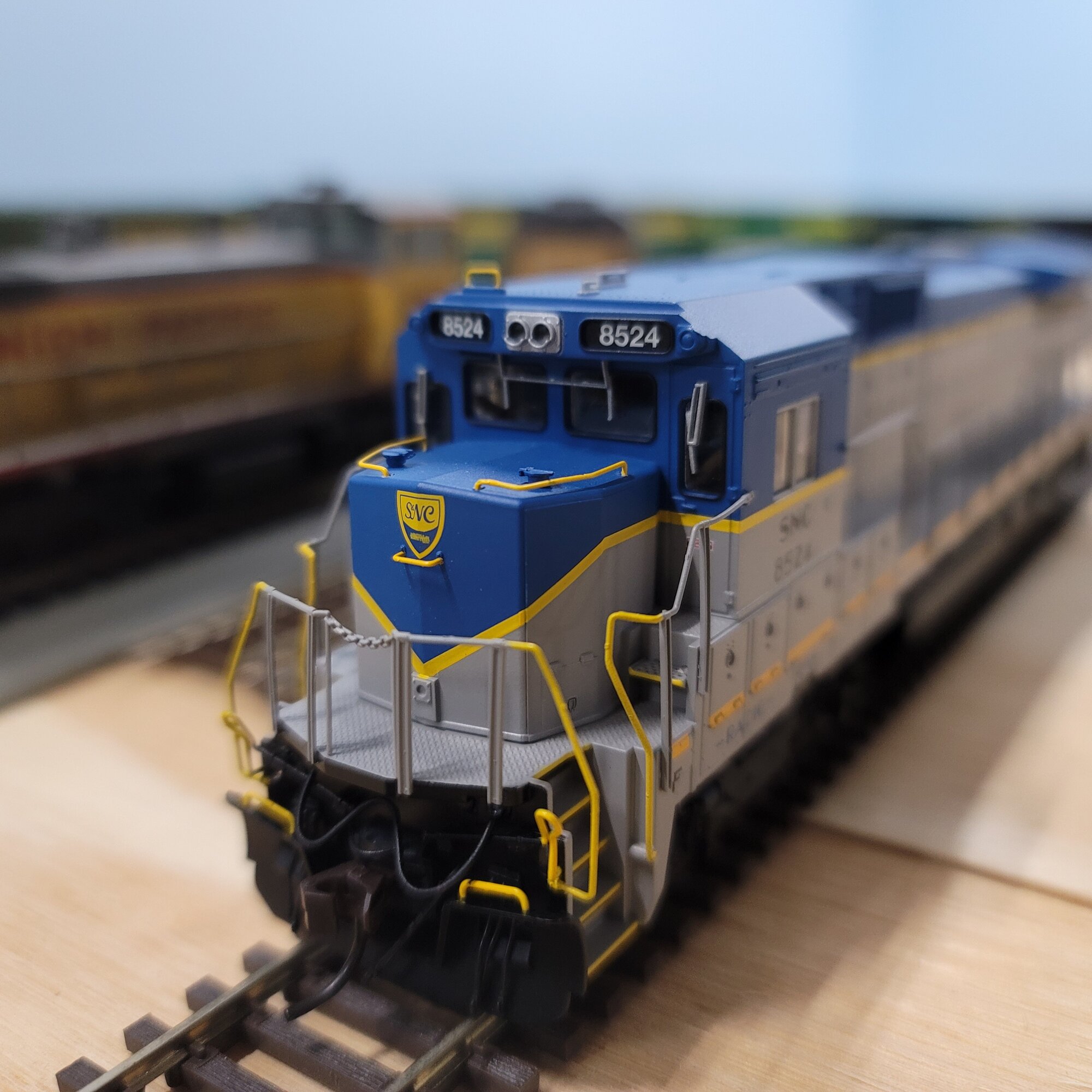 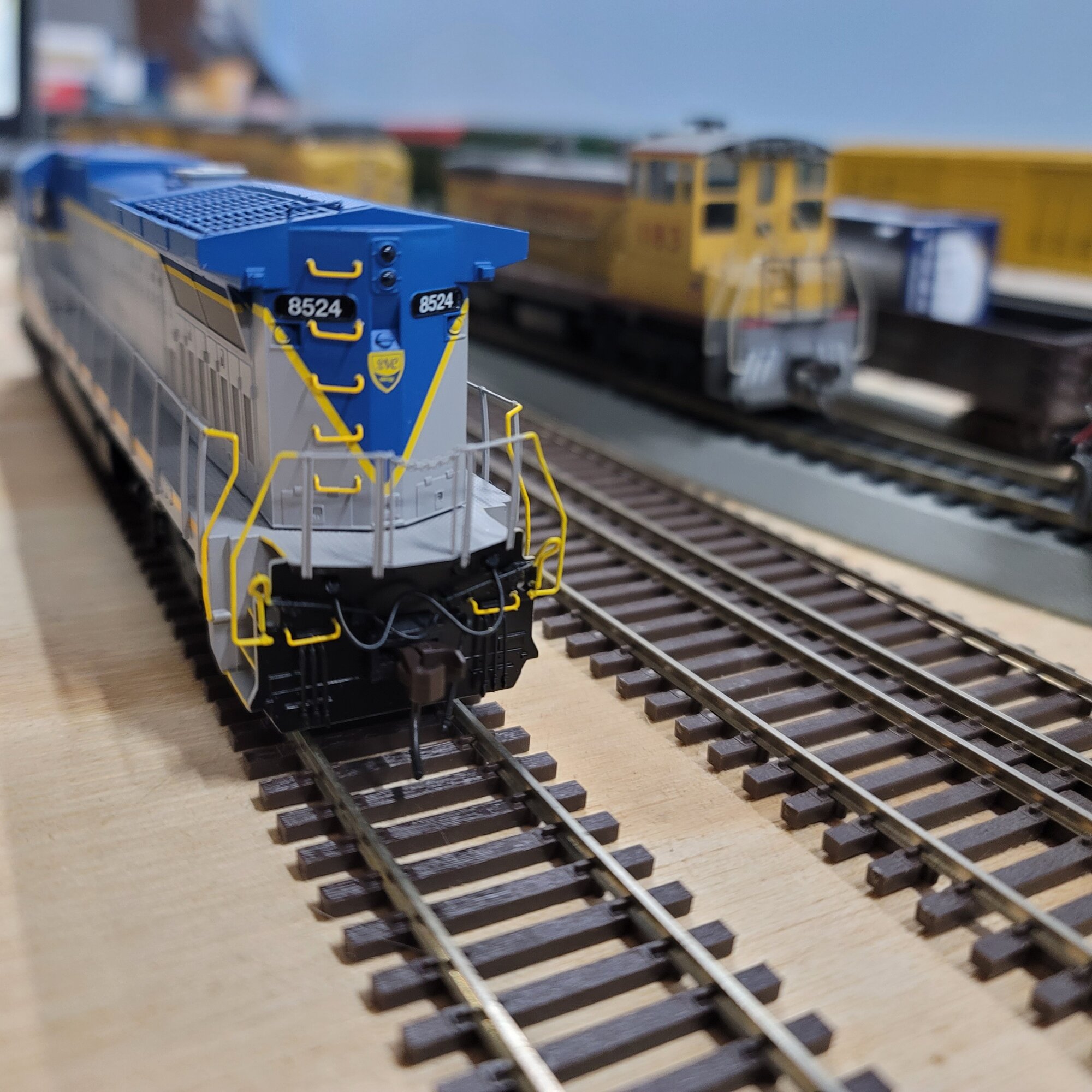 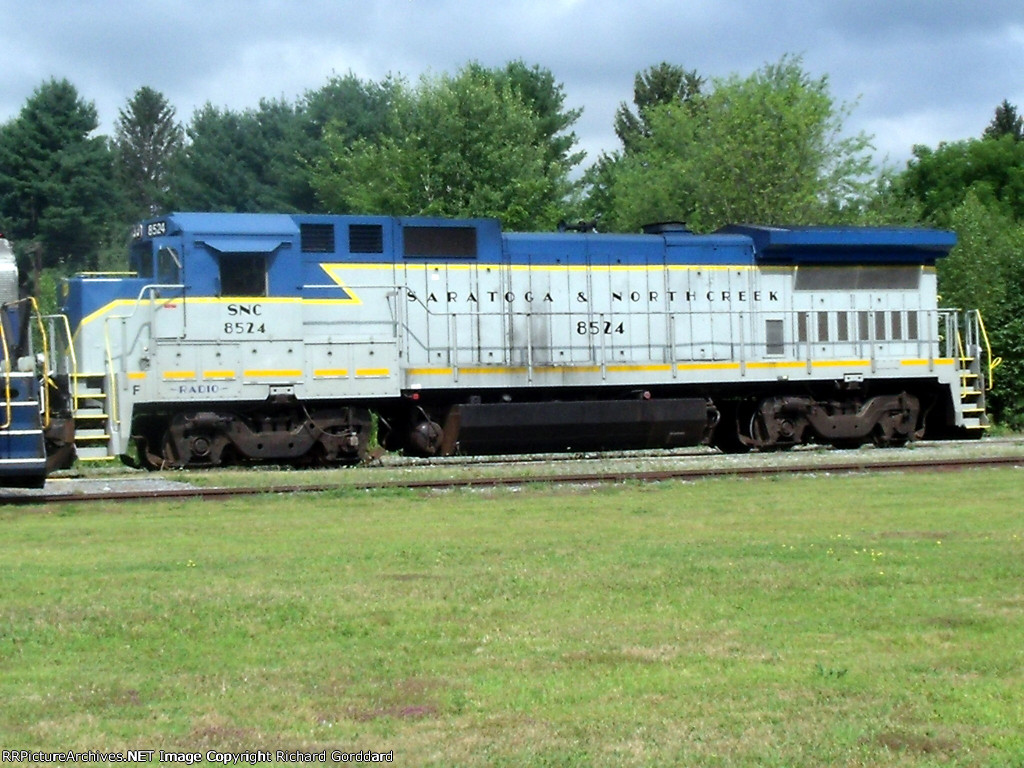 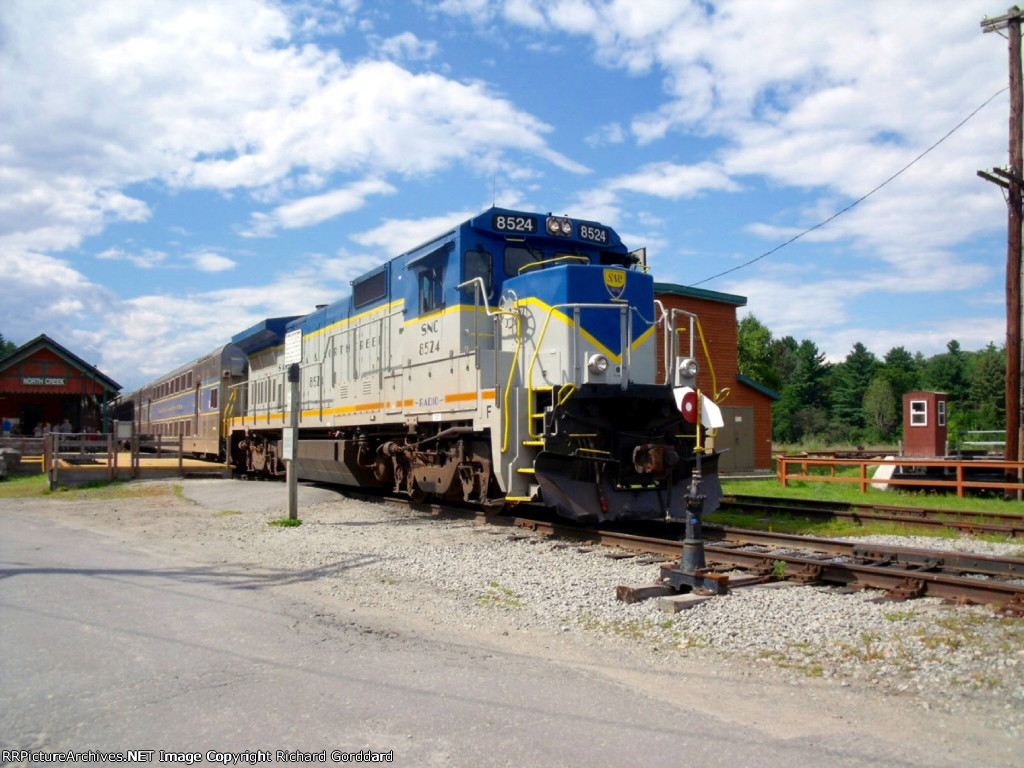 A unique road name as well in my opinion, very nice !

BigGRacing said:
A unique road name as well in my opinion, very nice !
Click to expand...

Thank you! I wanted to pay homage to my home turf. I have 2 boxcars now in the same RR SNC as well.....trying to acquire a couple more and I will look at getting a few passenger cars that were used on the ski train as well.
D